My Review of "Club Dead" 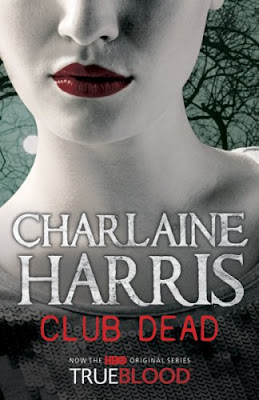 Written by Charlaine Harris
Released in 2003

If you think that quote is dramatic enough, it should give you a very good description for how the third book plays out. Sookie and Bill may be ship-worthy on the series, True Blood but the books have been more conflicting with me.

There are a lot of problems with Sookie and Bill as a couple on screen but I think the biggest one has to be Bill’s possessiveness. It’s never going to be an endearing trait and territorial as he is, this book actually doesn’t feature him a lot in. Though that’s more than compensated with the fact that he’s virtually mentioned every second page.

We’re at the stage that in Sookie and Bill’s relationship, things have gotten progressively sour between them. Bill’s attempts of cataloguing a vampire directory for the Queen Of Louisiana and his attempts of keeping this from Eric, Pam and Chow had Sookie threatened by them.

Worse than that for Sookie was Bill being kidnapped, which meant that Sookie had to team up with Werewolf Alcide in Jackson, Mississippi. This is the book that has Sookie with not one suitor but three of them and each of them have their pros and cons.

Alcide could arguably be the best man for Sookie. Not only does she have the pleasure of being with him in the daylight but he’s a bit of a confidence booster, has the sister from Heaven (seriously, try not liking Janice) and can more than deal with the dark world that Sookie’s been sucked into. Even his little moments of jealousy and bitch ex-girlfriend Debbie aren’t strong enough deterrents.

Then there’s Eric. Now I’m someone who’s always preferred Angel to Spike in the Buffyverse but given that Eric is very much the latter, I’m finding myself baffled with how much I like him. It’s probably down to the fact that he’s less territorial and there’s more playfulness with him compared to Bill.

Out of the three of the suitors, Bill is the one who fared worst in this book alone. While it’s not his fault that gay vampire Russell Edgington decided to snatch or that Lorena enjoyed torturing the hell out of him, it’s the fact that he intended to ditch Sookie for Lorena that’s bothersome and the rape scene in the trunk (despite him being hazed and hungry) that screw him over.

In fact it’s a combination of all of these that had Sookie rescind his invitation at the end of the book along with Eric. There’s more than enough times in the book where Sookie openly expressed her growing apathy with Bill and Eric bringing constant danger to her, so it’s a pretty organic decision that’s made.

As for the plot with Russell, it’s one of the things that falls apart here. Sure, Sookie gets the home invasion from hell and even Eric isn’t unscathed but the ending with Bill giving Russell a piece of the vampire directory did feel like an afterthought. Faulty plot developments can be forgiven for some good character moments and dialogue and that’s where the book is strong.

- It seemed a bit of a coincidence that Tara would also be in Jackson with vampire Franklin Mott. I wonder if we’ll see her and Sookie’s dance routine on the series.
- This book gave Bubba some fun stuff to do, though apparently he can take instruction a bit too literally. Like stuffing a corpse in Alcide’s closet.
- Taboos aren’t much to vampires. Despite his constant lusting for Sookie, Eric actually had some downtime with a male vampire as well.
- Chronologically, this story took place around Christmas, so it’s about six or seven months since Sookie and Bill first met each other.

“Club Dead” is a riveting read and while it would be nice to have some more development on the other characters in Sookie’s life besides her vampire suitors, it’s hard to knock it that much. Plus, kudos for Sookie getting to stake Lorena.