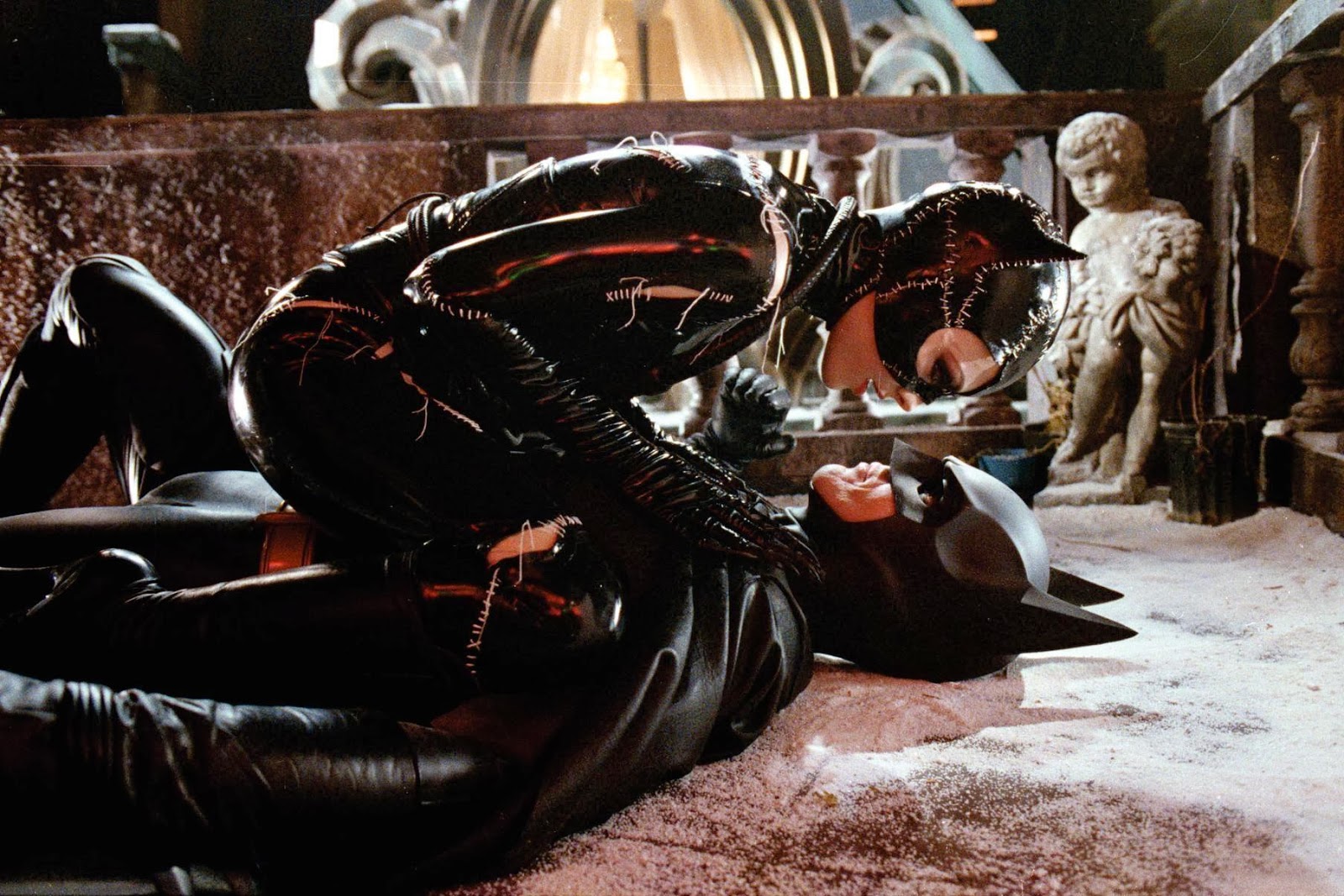 Batman: "Mistletoe can be deadly if you eat it."
Catwoman: "But a kiss can be even deadlier if you mean it. You're the second man who killed me this week, but I've got seven lives left."

My favourite film. I could pretty end this review with those three words alone but I won't. Now I loved the first Burton movie and enjoyed at least one of the Schumacher ones (while being extremely disappointed in the second one) but out of anything Bat related, this is by far the best movie.

The reasons vary for me as to why I love this movie in particular. The Christmas/snowy backdrop certainly plays a role into my love for the movie, the even darker tone is another reason but more to the point, I just think all of the villains in this one really click and there's pretty much three of them.

As corrupt businessman Max Schreck, Christopher Walken could've easily found himself playing an unengaging character but within this movie he managed to be truly repellent and hold his own against the other two main antagonists as well as the man known as Batman/Bruce Wayne. Because of this, his eventual demise in the movie was all the more satisfying to watch.

Then there's the Penguin. Danny DeVito certainly had a mountain to climb after Nicholson's performance as The Joker in the previous movie but I actually think he managed to turn in a far more compelling performance as both the tragic and downright sinister Oswald Cobblepot. I spent a great deal of this movie grudgingly admiring his scheming towards trying to become the Mayor of Gotham and ruining Batman's reputation and actually felt bad for him when it eventually went wrong and he died.

However the best performance in the entire movie was of course Michelle Pfeiffer. Whether it was as the rather volatile version of Catwoman or the more tragic like elements of Selina Kyle, Pfeiffer's take on both characters and the transition from Kyle to Catwoman remains one of the best moments from the entire movie.

I liked the more darker and animalistic side we saw with the character and Pfeiffer's chemistry with Keaton was electrifying throughout the entire movie. It's a shame that Catwoman didn't succumb to the idea of living in a fairytale with Bruce Wayne or that she didn't appear in subsequent movies but it's hard to deny that Pfeiffer's take on the role was nothing short of memorable.

As for Keaton, much as I loved him in the first movie, I actually do think this movie was his best performance as the Caped Crusader. He certainly nailed the roles of Bruce and Batman even better second time around and again, it was a shame that he didn't continue for the following two movies.

- I love the fact that the movie was largely set during Christmas even though it was released during the summer of 1992.
- A lot Penguin's minions though seemed to be styled in a way you would imagine The Joker would've had his to be honest.
- This movie came out the same year as Batman: The Animated Series debuted on US television.
- I also think this movie along with Schumacher's only contributions probably had the most overt sexual overtones as well. That's not a criticism, just an observation.

Dark, thrilling, filled with delicious quotes and iconic moments and imagery, this is by far (in my opinion) the best movie I've seen in relation to the Dark Knight. Also, going by my earlier comments in this review, Batman Returns would also be my favourite movie of all time as well.

I love 'Batman Returns'. It's amongst my all-time favourites. I really like the dark, gothic, stylized feel to the movie... something that gives it a timeless quality and prevents it from looking dated now. Michelle Pfeiffer is brilliant as Catwoman, and I love that Tim Burton transformed the Penguin into a sinister, grotesque, freak show type character - something carried on in the animated series... at least for a while. So much more interesting than being simply a short, rotund mobster with pretensions to being upper crust.

Same here. It's just a ridiculously amazing film to watch over and over.

De Vito's take on the Penguin was a pretty compelling one, though I do enjoy the depiction of the character in The Animated Series.

Pfeiffer's Catwoman is one of the best takes on the character as well.