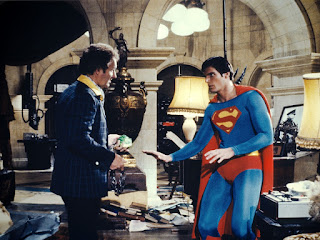 Superman: "I'm here to fight for truth, and justice, and the American way."
Lois Lane: "You're gonna end up fighting every elected official in this country!"

I'd resist the urge to say the world needs a Superman right now but it's true nonetheless. It's been forty years since the release of this iconic movie and it's a film that has aged beautifully. Despite some great successors in the role (and some great predecessors to it as well), it's safe to say that Christopher Reeve quite simply is Superman.

Some actors just embody a role (recently Gal Gadot as Wonder Woman) and in this movie and it's following three sequels, regardless of their quality, Reeve truly captures this role like no-one else. I could gush about how amazing he was as Superman and it would be fitting for this review and the next three I have planned as well.

The movie starts off with the Krypton in it's final days backstory and it's beautifully told out as both Jor-El (Marlon Brando) and his wife, Lara (Susanna York) send their only born in a pod to safety from their planet's destruction while the villainous, General Zod (Terrance Stamp) along with his co-horts, Non (Jack O'Halloran) and Ursa (Sarah Douglas) are banished to the Phantom Zone but don't worry, we'll get more of those three in the next movie.

From Krypton's destruction onwards, we get to see a young Clark taken in by Jonathan (Glenn Ford) and Martha Kent (Phyllis Thaxter), living a normal life in Kansas before heading to the big city of Metropolis to become a reporter for the Daily Planet, run by Perry White (Jackie Cooper) and a friendly rival and friend for budding journalist, Lois Lane (Margot Kidder).

With Reeve being the iconic Superman/Clark Kent, the same accolade can also be give to Margot Kidder. Lois is without a doubt one of the best female characters of all time and I do think from a big screen perspective a lot of that is down to Kidder's performance. The chemistry between Christopher and Margot, whether it's Lois and Clark's general sparring or the former getting her scoop with the Man of Steel, is positively electric. You cannot fake that sort of chemistry and both Reeve and Kidder had it in spades.

In terms of villains, with Zod and company put on the back burner, it's up to the scheming Lex Luthor to bring the menace here. This is probably the best use of Gene Hackman's version of Lex and he's certainly on fine form here, battling with Reeve's beautiful sense of right as Lex schemed to one of the missiles to detonate in the San Andreas Fault, sinking California and leaving Lex's desert as the new West Coast, though before subjecting Superman to some Kryptonite.

For a movie little over two hours, a lot of ground is covered and a lot of mythos are revealed too. Superman's solution for stopping Lex's great plan is something revisited in later movies as his love for the planet he's adopted is evidently shown. It's a great moment in a movie filled with many of them, including some great support scenes from the likes of Jimmy Olsen (Marc McClure) and Eve Teschmacher (Valerie Perrine), both of whom I loved as characters.

- Some of the actors from this movie would later appear in Smallville, Supergirl and Justice League. Meanwhile Kirk Alyn and Noel Neill appeared as Lois's parents.
- Donner himself did make a cameo in this movie. There's also cameos from Larry Hagman and Rex Reed too.
- This was the first movie to make use of the new Dolby stereo 70 mm split stereo surrounds.
- This was the second highest grossing movie of 1978, after Grease of course.

Superman is a triumph of a superhero movie. It's been forty years and it's legacy remains intact. Everything you'd want in a superhero movie is exemplified in this one with Reeve being utterly sublime in the title role and backed with Kidder, Hackman, Stamp etc, performance wise. This movie really will make you believe that a man can fly.