My Review of Doctor Who's "Music Of The Spheres" 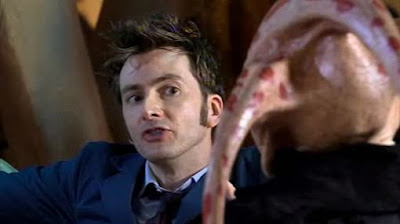 Graske: “Must speak to The Doctor.”
The Doctor: “I don’t care. You’re a Graske and a Graske is trouble – out!”

Continuing in a trend of mini-scenes for Doctor Who, the only difference with this little special is that it’s for the 2008 Doctor Who At The Proms concert and not for Children In Need. Of course that doesn’t matter when there’s fun to be had and for seven minutes, fun is the order of the day.

Following “Journey’s End” where The Doctor pretty much lost everyone, he decides to cope with his loss the only way he can – writing a symphony. Well he has coped in more destructive manners beforehand so this is a bit of relief for The Doctor’s mentality in my opinion.

Of course he doesn’t really get a chance to be properly alone because a Graske has materialised on to the TARDIS and The Doctor isn’t pleased to see him. So far, all we’ve seen from the Graske in “Attack Of The Graske” and The Sarah Jane Adventures serial “Whatever Happened To Sarah Jane” is that they are not the most trustworthy of creatures.

The Doctor himself wants the Graske out of his TARDIS and aside from a little of shouting, The Doctor isn’t entirely effective in doing this. That’s mainly because the Graske is successful in distracting The Doctor. Well, it’s not like The Doctor hasn’t has a lot to deal with in recent weeks, what the return/loss of several companions and Davros being on his destructive high with the Daleks.

The Graske gets The Doctor’s attention by asking about the beautiful music that he hears in the TARDIS. The latter gives an acceptable enough answer about planets revolving around suns, suns revolving around galaxies, galaxies revolving around each other. With that, you then take gravity patterns to feed them to the TARDIS’ harmonic filter and then presto, music.

To be honest it’s a nice way of getting The Doctor and the Graske to agree on something but at the same time a space portal also reveals to The Doctor, the London Royal Albert Hall. For those of you who were lucky to see Doctor Who At The Proms back in July 2008, then this scene is even more heightened all for it.

The Doctor’s on his shouty best and even waxes lyrical about the notions of orchestras before actually getting the orchestra to play his own material. While conductor isn’t entirely The Doctor’s strongest suit, there’s no denying the overall fun of this piece either.

More importantly, the Graske has swiped The Doctor’s water pistol and has gone into the audience to create havoc. Of course he doesn’t succeed much when The Doctor pulls him back into the TARDIS and sends him. I do wonder that specials aside, will we actually see this particular creature in a full episode of the series.
The last minute of the special is also uplifting. The Doctor does tend to go with the change in music trends quite a bit but his overall message of encouragement (your inner musician) isn’t necessarily something to be scoffed at. You got love this show’s bouts of optimism.


- David Tennant is the only one credited for this scene. This is his first proper solo Doctor Who adventure and I’ve read that the 2009 specials may have a similar trend.
- The Doctor called his piece “Ode To Universe”. He was also wearing another one of his blue suits.
- Reverse the polarity of the neutron flow – that’s a nice shout out to Jon Pertwee’s Doctor.
- Is it strange that this didn’t entirely bridge gaps between “Journey’s End” and “The Next Doctor”?
- Despite this only airing in July and widely available on YouTube, this little scene won’t be available on the Season Four DVD. This was the last thing to be filmed in relation to the fourth season also.
- Ending this scene with the 1963 theme tune of the scene was a clever move.

After a series of dramatic and stirring episodes, the overall light hearted antics of “Music Of The Spheres” are welcomed. It may not have you reminiscing about days gone by in the series (except for the two obvious references) but it’s still a worthy addition to the series overall continuity.

My Review of Doctor Who's "Music And Monsters" 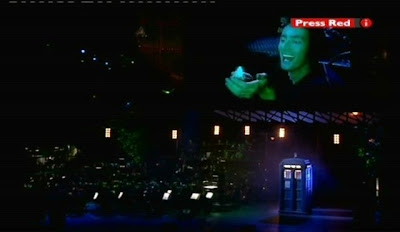 David Tennant: “It’s like being a pop star at the moment. When I came on stage, I felt like Robbie Williams.”

Doctor Who and Children In Need continue to go hand in hand and compliment each other. In 2005, audiences got their first taste of David Tennant as The Doctor in the “Pudsey Cutaway” scene and now the lovely man is hosting a concert dedicated to the music from the series.

In fairness, you’re not five minutes into watching this concert that it’s told to us by David Tennant, Julie Gardner and Murray Gold that the concert had been on the card for a good part of a year. While they also might have pointed out the time and effort it takes into preparing such an event, it’s unsurprising that they come up trump.

David Tennant himself makes for a good host as he calmly plays audience participation (not that it took much to get the audience going) and relayed the history of the new series as well as bits from the old series during takes. When he wasn’t on hosting duties, he was being asked about several things such as “The Runaway Bride”, Season Three and the show’s theme.

Musically if you owe the soundtrack from Seasons One and Two, then you’re good to go really. All the familiar stuff is drummed out during the hour long concert with music dedicated to the Daleks, Cybermen, Sycorax, Clockwork Droids, Rose’s theme, the music from episodes such as “The Girl In The Fireplace” and “Doomsday” to name a few and of course, the theme tune itself.

There’s a good few minutes dedicated to the discussion of Delia Derbyshire’s theme tune with David Tennant, Russell T. Davies, Murray Gold and Ben Foster all offering their own thoughts in the matter. Overall this show has one of the most enduring themes going with some versions obviously sounding better than others. I’m particularly fond of the Jon Pertwee era of it.

Probably the best part of this entire concert is the fact that we get a behind the scenes look of “The Runaway Bride”. While it’s hard not to notice the blinding sun during the making of this episode (it was after all filmed in July), as a viewer who watched this on Christmas Day, it was a nice way of psyching myself up for the episode so to speak.

It was also the first time that not only did we have to think about Rose being gone but it was also around this time that Donna was being introduced. Catherine Tate herself looked in fine form as she described Donna to be an untraditional companion for The Doctor. Plus we got some music for the episode itself.

More importantly what really spirited this concert was the use of Daleks, Cybermen, Clockwork Droids, Sycorax and the occasional possessed group of people. With the audiences (especially the youngsters) clearly lapping it up, it’s clear that Doctor Who’s ongoing partnership with Children In Need is safe for many a year to come.

- The concert opened with a showing of clips of the Ninth Doctor, Tenth Doctor, Rose, Martha, Donna, Jackie, Mickey, a Dalek and a Cybermen. Shame about the lack of Jack or Sarah Jane.
- I spotted Freema Agyeman in the audience. The cameras even showed her off at one point.
- Noel Clarke and Camille Coduri really are great. You can tell like every cast member that they totally enjoyed working on Doctor Who.
- This concert aired on Christmas Day, six hours before “The Runaway Bride” and is available on the Season Three DVD.
- Anthony Stewart Head narrated this and has pretty much been narrating Doctor Who Confidential since then.
- David Tennant does have the most flamboyant of dress senses for a straight man. That’s all I’m saying on the matter.

Murray Gold: “This show in a very un English way is very passionate. It came back in a big way and has a voice.”

“Music And Monsters” was definitely an appropriate title and it succeeded in it’s delivery for both Children In Need and just for being essential entertainment. As well as the brilliant scripts and acting, the music also brings Doctor Who to life and this wonderful concert is a nice reminder of that.