My Review of Doctor Who's: "The Three Doctors" 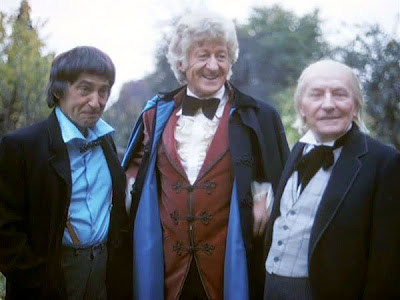 The Brigadier (regarding the First Doctor): “That old chap…”
Jo: “Afraid so.”
The Brigadier: “Three of them. I didn't know when I was well off.”

When it comes to Sci-fi and fantasy programmes, while their impact on TV can be timeless even years after their end, rarely do many of them actually make it to a decade in terms of produced episodes. This series is a notable exception.

There are plenty of ways the writers could’ve celebrated the series hitting such an important year but one of the ideas was to do a story where Jon Pertwee, Patrick Troughton and William Hartnell would all team up together as their respective versions of The Doctor to take on a treacherous Time Lord.

Sadly that isn’t The Master but the idea of multiple Doctors first came from this and would be a trend that would appear in further serials such as “The Five Doctors”, “The Two Doctors”, “Dimensions In Time” and recently, “Time Crash”. Honestly this could be the cream of the crop really.

The story starts off well enough with a superluminal signal sent to Earth and a massive blob with one mission – capture The Doctor. Okay so that’s hardly the most original mission but the blob’s determination is what makes the story as good as it gets in my opinion.

When it’s not catching passers by, equipment inside UNIT HQ, it does nearly manage to snare The Doctor and Jo outside UNIT. They manage to get away but old Bessie isn’t quite as lucky as the blob literally gobbles the prized vehicle up in no time.

One of the strongest points about this serial is that we get four episodes and throughout the episodes, there’s very little hanging up. Half-way through the first episode alone we’re reunited with both the Second and First Doctors and suffice to say our Third Doctor isn’t particularly pleased in seeing his former selves.

Jo is also a little taken aback by seeing the men who used to be The Doctor but luckily the script doesn’t take ages in her getting the general gist. Within seconds she seems used to her own Doctor and the Second Doctor, who is physically there to help them out with the blob. The First Doctor meanwhile is caught in a time eddy so he’s not as a big player as you might have hoped.

Still it’s not a huge loss as there’s an excellent rapport between Jon Pertwee and Patrick Troughton who throughout the serial bicker like school kids but never in a way that undermines the actual storyline. These are two of my favourite Doctors so having them together onscreen works a treat.

When the blob does eventually catch up with the lot of them, they all manage to get teleported to another world. Jo could’ve been safe back at UNIT for a while had she not actually wanted to be by her Doctor’s side. Not that you can blame her as the real menace made sure that even UNIT wouldn’t be safe for long.

As other worlds go, this falls into the series stable for using a quarry during a sunny day but it’s nice enough and it’s great that we’ve finally gotten a non-Earth bound story in perhaps the longest time on the series. This was something we should’ve seen a bit more often in the Third Doctor’s era.

On the baddie front, we have a weird set of creatures known as Gel Giants. They basically looked like Christmas baubles but they had a neat time in attacking UNIT soldiers back on Earth and capturing everyone else who landed in this mystery world. They were however not the main baddies of the serial, which is a relief.

That honour went to Omega. Proving that The Master wasn’t the only insane Time Lord out there, Omega is one of those characters with great potential and is fantastically served in this episode, even the actor voicing him did have a tendency to a bit too OTT at times.

Omega was the lucky bugger who managed to discover the concept of time travel, giving the Time Lords their moniker in a way. Of course because the Time Lords aren’t the most loyal of people, he was also abandoned and left to his own defences in an anti-matter universe.

This universe, like Omega’s sanity is also unstable and with his will being the only that’s keeping it together, the sociopath wants to use both Doctors so that he can escape. Of course they aren’t exactly eager to help Omega out and there is a series of mind games played out by both Omega and the Second and Third Doctors for the remainder of the serial.

Of course while Omega might be a seething volcano of malice and fury, his defeat comes at the hands of the Second Doctor’s recorder coming into contact with the anti-matter universe. As deaths go, this is probably one of the best ones that could’ve been given to Omega.

Although we have to wait another ten years to actually see him again, it’s almost a shame that the writers had never considered recurring the character. Not in the same way they did with The Master but it would’ve been nice if Omega and The Doctor had had a few more meetings. I liked his character a lot and although a part of me was disappointed that we didn’t get Daleks/Cybermen/The Master, I’ll freely admit that Omega made for a good big bad.

As for the companions, this is probably one of my favourites for Jo, whose loyalty to The Doctor really does come into play. She’s also assertive a few times in the serial as well and I’m delighted that Benton got to play a slightly bigger role in the serial. His reaction to the inside of the TARDIS was brilliant. The only fault was The Brigadier who came across as a buffoon in this serial and Mike Yates, who was a no show.

Also in “The Three Doctors”

The original title for this episode was going to be “Deathworld”. Although obvious, I think “The Three Doctors” was a better choice.

Second Doctor: “My dear fellow, you are being a bit dim, aren't you? Your effectiveness is now doubled.”
Third Doctor: “Halved, more like.”

First Doctor: “Have you done anything?”
Second Doctor: “Well, we've... err... assessed the situation.”
First Doctor: “Just as I thought. Nothing.”

Third Doctor: “Well, Sergeant? Aren't you going to say that it's bigger on the inside than it is on the outside? Everybody else does.”
Benton: “It's pretty obvious, isn't it?”

This is also the only time that Benton actually to go in the TARDIS and on a trip. Does that mean that Mike Yates is the only companion not to have done?

First Doctor: “Oh. So you're my replacements... A dandy and a clown.”

William Hartnell was actually ill when this was being made so that’s why his role is limited compared to Patrick Troughton.

Brigadier: “Well, in that case, Doctor, I suggest you contact those all-powerful superiors of yours!”
Second Doctor: “Oh, I don't think that would do any good. You see, at the moment, they're far from all-powerful. That's why it's been left up to me and me and me.”

Third Doctor: “How did you manage to survive?”
Omega: “How does anyone survive? Force of will. Mind, you might say, over anti-matter.”

In the fashion sense of this episode why did Jo have to wear that hideous fur blue top that looked twice Katy Manning’s size as well might I add.

Third Doctor: “All my life I've known of you and honoured you as our greatest hero.”
Omega: “A hero? I should have been a god!”

This serial was released on DVD in 2003 and there’s a brilliant commentary on it by Nicholas Courtney, Katy Manning and Barry Letts as well as interviews with the actors and Jon Pertwee and Patrick Troughton.

The Brigadier (on the Doctor): “Wonderful chap. Both of him.”

I have to give some serious praise for the use of score music during the end scene of the third part of this serial.

The idea of multiple Doctors is something that works brilliantly on screen as it might do on paper. “The Three Doctors” is one of the best ways they could’ve celebrated the series tenth anniversary and it’s easily one of Pertwee’s best serials to boot as well.