My Review of Doctor Who's: "Planet Of Evil" 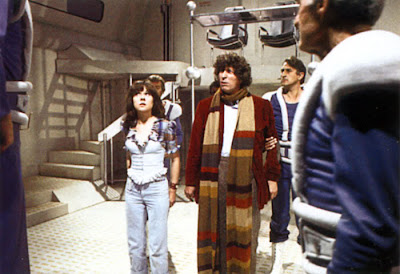 The Doctor (to Sorensen): “You and I are scientists, Professor. We buy our privilege to experiment at the cost of total responsibility.”

Fresh from the departure of Harry in the previous serial, “Terror Of The Zygons”, it’s time for The Doctor and Sarah Jane to have their first adventure by themselves and as far as adventures go, this is one is definitely not without its trouble.

The Doctor and Sarah Jane land on Zeta Minor, one of those planets that’s as far away from the universe as you can get and also one that’s rather ripe in its own trouble. Answering a distress call is what brought them there and there’s plenty to distress about on this planet.

With its jungle-esque atmosphere, there’s a nice sense of relief that for once we’re not looking at what’s clearly a quarry pretending to be a planet. Before all of the danger, there’s some light hearted dialogue between The Doctor and Sarah Jane. There’s a reason why Tom Baker and Elisabeth Sladen worked so well as a team and its little moments before they’re caught up in all of the action that highlights that.

Of course the action doesn’t stay in the background for long and soon enough we start seeing scientists getting murdered on this planet and as soon as Salamar claps eyes on the TARDIS, he’s quick to snare it, The Doctor and Sarah Jane without having to think about it too hard.

Once again we’ve got one of those military types who loathe The Doctor on sight. It’s not something that has significantly as The Doctor just by looking at him is able to offend the most hard nosed of types. Salamar is one sour faced so and so who spends way too much time in this serial being overtly aggressive towards The Doctor to the point of tedium.

Thankfully not everyone on board treats The Doctor and Sarah Jane with contempt. The much older and experienced Vishinsky is far more compassionate to the TARDIS and even willingly listens to The Doctor as he tries to figure out what’s going on.

It seems that anti-matter (the very problematic thing in “The Three Doctors”) is playing its part into the serial and it’s the very thing that is also preventing Salamar’s ship from leaving Zeta Minor as well. While everyone attempts to get rid of the anti-matter on board, it soon becomes apparent that’s there’s still a lot more to do before they are free.

Namely there’s a Professor Sorenson, who’s the source of the problems for this serial. He came onto Zeta Minor for his own scientific purposes such as his research for antiquark. Like Salamar, Sorenson is also as doggedly determined and pig headed and it’s this that also places a lot of people in jeopardy.

Well there’s that and then there’s the fact that being on Zeta Minor has affected Sorenson is a manner that even the DVD leaflet would compare to Jekyll and Hyde. Sorenson is becoming monstrous and throughout a good chunk of the episode, he goes about killing members of the crew, adding more strain between The Doctor and Salamar to boot.

It’s also noteworthy that half-way through this serial, The Doctor also goes down a creature pit. It’s one of the most gorgeously shot scenes during the Tom Baker era of the series, with some evocative music but it’s also relevant in the sense that The Doctor would later drag the Anti-Man Sorenson and throw him in it.

Effectively this saves the guy’s life but there’s still a raging lot of hostility to get through before then. Salamar’s vindictive side nearly has The Doctor and Sarah Jane ejected out of the ship and it’s also Salamar’s less than stellar decision to attack the Anti-Man with a neutron accelerator that multiplies the anti-matter.

Fortunately the dip in the pit is the very thing that ended up stopping the anti-matter from having total control. It’s also the very thing that saw Sorenson released too and after so much tension, the ending is slightly more positive than you would’ve expected it to be.

Sorenson’s thirst for scientific advancement is what lead to the dangerous events of this serial and it’s The Doctor’s attempts to sway away from his earlier discoveries that should hopefully not see such events happen a second time. Given how hazy Sorenson seemed to be at the end, The Doctor can only his plan truly works after him and Sarah Jane left that ship and Zeta Minor.

Also in “Planet Of Evil”

Seeing this serial, it’s clear to see how it influenced both “The Impossible Planet”/“The Satan Pit” and “42”. However I prefer those three episodes to this serial.

Sarah Jane: “Oh I see…what’s gone wrong this time?”
The Doctor: “Nothing, nothing at all. What makes you think something’s gone wrong?”
Sarah Jane: “Because you always get rude when you’re covering up a mistake.”

The Doctor joked about Shakespeare as well in this episode when he and Sarah Jane were going through the jungle.

The Doctor: “Someone’s in trouble.”
Sarah Jane: “Where?”
The Doctor: “Who knows? Stand by for emergency materialization!”

I was pleased to see Michael Wisher in the role of Morelli. Even though he’s much more effective as Davros, it was still nice to see him.

Salamar: “Have you checked the transmitters down there?”
Vishinsky: “Yes, but any signal would have been monitored by our receivers.”
The Doctor: “Perhaps my receivers are better than yours.”
Ponti: “Shut up!”
The Doctor: “My manners certainly are.”

Sarah Jane: “Do you ever get tired of being pushed around?”
The Doctor: “Frequently.”

This was the first serial that Philip Hinchcliffe had his influence over as both Terrence Dicks and Barry Letts had stepped down from the series.

Salamar: “There is no anti-matter on this ship.”
The Doctor: “And I am telling you there is.”

The Doctor: “The answer’s very simple. You’ve reached the end of your piece of elastic.”
Salamar: “What are you talking about?”
The Doctor: “It won’t stretch much further.”

Regarding The Doctor falling into the pit, it reminded me of The Doctor’s mental battle as well with Omega in “The Three Doctors”.

The Doctor: “Keep away.”
Sorenson: “I require an explanation.”

The Doctor: “If it hits Sorenson, it could be disastrous.”
Sarah Jane: “You mean things can get worse? I don’t believe it.”

Both Frederick Jaeger and Ewen Solon had worked together on a previous story - “The Savages” in 1966. This serial did recycle some past guest actors.

The Doctor: “Come on, Sarah. We’ve an appointment in London and we’re already 30,000 years late.”

This was released on DVD in October 2007. There’s a good commentary from Tom Baker, Elisabeth Sladen, Prentis Hancock and Philip Hinchcliffe as well as some good extra material.

“Planet Of Evil” is very much a serial that would work today as well as it did back in 1975. It’s something of a confusing serial in places but overall, it’s a solid adventure and quite sinister in some parts.

heehee good quotes, doubt you know me, im just doing a stupid make everyone a bit happier thing and leaving happy comments on good blogs, yours is well funny! keep up the good work!