My Review of Doctor Who's: "The Caves Of Androzani" 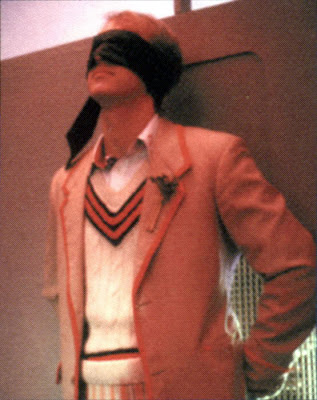 The Doctor: “Too late, Peri. Going soon. Time to say goodbye.”
Peri: “Don't give up! You can't leave me now!”
The Doctor: “I might regenerate. I don't know. Feels different this time …”

Regeneration stories can often be a tricky mix but this one however virtually reeks of perfection. Doing what a lot of Doctors have done before him, Peter Davison decided to leave the role after three years playing The Doctor and the writers certainly gave him a parting worthy of his good work.

Only into her second serial with The Doctor, Peri is in for a rotten time when both her and The Doctor arrive on Androzani minor. First off all, there’s getting herself into a cobweb with fatal consequences and then we have to deal with the fact that her and The Doctor find themselves arrested within minutes of landing on the planet.

That’s the thing with this story. Throughout all four parts, both The Doctor and Peri, when they aren’t staring death in the face are getting repeatedly captured and terrorised by various sides, all of which voicing their own personal dislike to The Doctor.

Morgus, one of the key characters in the story is instantly dismissive of The Doctor and Peri that he has them executed as the first episode ends. It’s a delicious cliff-hanger, one that with the reveal of android versions of our heroes being killed doesn’t mar the overall effect.

This of course leads into the second capture of the story. If Chellak and Morgus weren’t the most hospitable of captors, then the easily annoyed Sharaz Jek is also not the kind of person you want to spend a considerable amount of time either, although as characters go, he is certainly riveting to watch.

While The Doctor is instantly berated and abused by the villain, Sharaz Jek does take something of an overall interest in Peri and throughout the latter part of this story, there are some really unsubtle Beauty And The Beast parallels. I know Peri’s nice to look at and all but Sharaz does go a little too far in his overall fixation.

When The Doctor and Peri do manage to momentarily escape from Sharaz Jek with the real Salateen with them, Sharaz’s main priority seems to be getting Peri back. It makes little to no difference that the girl’s infected with Spectrox Toxaemia along with The Doctor. In fact he seems to enjoy the idea of torturing The Doctor through his androids just so he can get Peri back into his clutches.

Of course, Sharaz Jek is the least of The Doctor’s problems. Getting captured by the annoying Stotz means he’s tied up and blindfolded at one point. It also seems that Morgus is wary of his presence too, though the fact that he refuses to consider the notion of The Doctor is a little strange.

Still with idiots like Stotz around the place, escaping isn’t that hard for The Doctor. He’s able to get out of his restraints and even tries to crash land the ship back on Androzani Minor. The notion of impending regeneration is at this point more or less drilled into our skulls. We know The Doctor’s going to change but it’s only a case of when and whether or not he’ll be able to save Peri.

As for Morgus, we do learn a lot about him in this story. We know that him and Sharaz Jek have personal history and that Morgus’ amoral streak isn’t above assassinating the President, which he does with such joy. The only problem with Morgus is his underestimation of those around him.

First off all, Timmins knows exactly what he’s capable of and wastes no time in getting him deposed. She even goes for the jugular and seizes all of his private assets as well to boot. As enemies go, she’s definitely a very oily woman. The look of humiliation on Morgus’ face however is nothing short of priceless.

Then there’s his dim-witted mercenaries to boot. Originally they were going to help him steal Sharaz Jek’s supply of Spectrox but now that Morgus has no power, they sensibly refuse to help him. Well, it would be sensible if Stotz hadn’t decided to kill for their act of refusal.

As for Stotz, he’s decided now that he wants an equal cut in the Spectrox and given that predictably enough, Morgus needs him more than the other way round, Stotz manages to get his demand. As a team, these two are out and out despicable throughout the entire story.

Elsewhere Peri manages to go from the barely pleasant quarters of Chellak back in Sharaz Jek’s arms when he snatches. See, there was a downside to sending the Salateen android on a fool’s errand but it’s around this time that some sympathy is conveyed for Sharaz.

Okay, so there’s no denying that his fixation on Peri is still creepy but at least when The Doctor returns this time around, Sharaz isn’t threatening decapitation. Instead they band together in order to save Peri by getting an antidote from the Queen Bat and while that’s happening, mud bursts are causing big problems.

On the plus by the last ten minutes of this story both Stotz and Morgus get their just desserts and some sympathy is conveyed when Sharaz dies in the Salateen android’s arms. I didn’t think this story would end up making me feel sorry for someone like Sharaz but I’m impressed that it did.

As for Peri, her life being saved comes at the cost of The Doctor’s. Regenerations scenes are usually quite strange but there’s some quite bleak about this one. It makes sense for The Doctor to have visions of Tegan, Nyssa, Adric, Turlough, Kamelion and even The Master before taking the form of his sixth incarnation. Peri’s utter confusion by what’s just happened is nicely conveyed.

Also in “The Caves Of Androzani”

Although this episode had caves in the title, the things we actually saw were blowholes instead. Even The Doctor mentioned that.

The Doctor (re him/Peri): “We travel a lot.”
Sharaz Jek: “Interesting. We shall have a lot to talk about.”

So the piece of celery actually tells of poisonous gases when it changes purple. Was that added at the last minute?

Sharaz Jek (to The Doctor): “You have the mouth of a prattling jackanapes. But your eyes… they tell a different story.”

Peri: “Why are you keeping us here?”
Sharaz Jek: “Oh, my exquisite child. How could I ever let you go? The sight of beauty is so important to me.”

The use of The Doctor’s physiology is what confused Sharaz Jek’s androids at one point in this story.

Sharaz Jek: “When I ask you a question, I do not expect flippancy. Where’s Peri?”
The Doctor: “I don’t know.”

Morgus (re The Doctor): “Who’s that?”
Stotz: “Government snoop, sir.”
Morgus: “Take off the blindfold.”

It’s kind of fitting that The Master appeared in this story briefly, given that he was in Peter Davison’s debut at the end of “Logopolis”.

Stotz: “You better turn this ship around Doctor!”
The Doctor: “Why?”
Stotz: “Because I'll kill you if you don't!”
The Doctor: “Not a very convincing argument actually, Stotz, because I'm going to die soon anyway, unless of course-”

This of course would not be the last time we see Peter Davison as The Doctor. Twenty three years later we got him in the “Time Crash” scene with David Tennant.

Sharaz Jek: “To think that I, Sharaz Jek, who once mixed with the highest in the land, am now dependent upon the very dregs of society. The base, perverted scum who contaminate everything they touch. And it is Morgus who brought me to this! Morgus destroyed my life! Do you think I'm mad?”
Peri: “N-No.”
Sharaz Jek: “I am mad. Do I frighten you?”
Peri: “N-No.”

Sharaz Jek: “You think bullets could stop me now? You stinking offal, Morgus. Look at me!”

This came out in 2001 with a good commentary from Peter Davison, Nicola Bryant and Graeme Harper. The Behind The Scenes footage is worth checking out.

Peri: “Doctor?”
The Doctor: “You were expecting someone else?”
Peri: “I – I – I.”
The Doctor: “That makes three "I"'s in one breath. Makes you sound a rather egotistical young lady.”
Peri: “What's happened?”
The Doctor: “Change, my dear. And it seems not a moment too soon!”

Colin Baker’s face appeared at the end of the fourth part of this story and his name before Peter Davison’s. The Magma creature was naff.

There are some stories that easily earn their stripes and this is definitely one of them. While “The Caves Of Androzani” is without a doubt one of the more darker stories from the series, it by far one of the best as well. A fantastic send off for Peter Davison and a very good introduction for Colin Baker. How could you not like this?