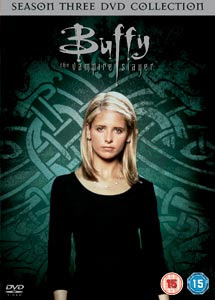 It’s that special year in everyone’s life – the end of high school and for Buffy that means an ex-lover back from the dead, friendships tested, dynamics changed, an unstable rogue Slayer and overly ambitious Mayor. I did mention the end of high school, right? Hope I didn’t leave that part out.

School’s Out Forever And Don’t You Just Love It – Ah, Season Three the last innocent season of the series before the big, big life as an adult stuff would take over and some people the last good season of Buffy but to me, not quite as good as Season Two but hey, an undeniable classic no less. Season Three opens with the low key but essential episode “Anne” as a disillusioned Buffy attempts to keep her head down and mind her own business, which is obliterated when her urge to help an old friend and more homeless people escape from a mad demon slave cult and a hell dimension. It’s not the strongest opener the series has ever done but main battle has a super cool fight sequence (“I’m Buffy the Vampire Slayer and you are”) and although the Scoobies have a hard time slaying vampires without their slayer and best pal, the sheer effort and willingness of them to protect their town is oddly effecting. That added with a bitter Joyce/Giles scene on their own parental guidance towards Buffy over the years.

One of the strongest elements of Season Three is how the consequences of “Becoming Part 2” are dealt with and while it may have been upsetting for our Scoobies to not welcome Buffy back with open arms immediately, their actions and attitudes towards while harsh are realistic and it’s also wonderful that Kendra’s death sparks the activation of new Faith who makes more than a spectacular entrance in “Faith Hope And Trick”. Played with absolute perfection by Eliza Dushku, Faith is polar opposite to Buffy as you can get – she relishes the kill, deliberately shunts responsibility and her wild and promiscuous ways are fun to watch in the first half of the season. It’s amazing that despite the hostility in her episode, her and Buffy manage to semblance a friendship in a way that Buffy and Kendra never got the opportunity to.

Not that Buffy was short of people in her life in this season. With a more open relationship with Joyce and things back on track with Willow, Xander, Giles, Oz and Cordelia, it was appropriate that a soul fuelled and repentant Angel would spell trouble for Buffy, so much that Xander gets to act self-righteous and Faith shows that being impulsive has it’s drawbacks in “Revelations” when she tries to kill him. In between this action we also got to see Buffy briefly date Scott Hope (a one note guy but prettier than a future love interest), Joyce and Giles have crazy sex when they are reverted to acting like teenagers thanks to chaos lover Ethan Rayne in the hilarious “Band Candy” (Snyder alone is pathetic in that), Xander and Willow cheat on Oz and Cordelia with quite the fallout when Spike abducts them in “Lovers Walk”, an episode which more or less foreshadows Buffy and Angel’s off-kilter relationship later on in the year and the rise of new big bad – The Mayor.

Well we’ve had vampires as big baddies in the first two seasons so it made sense to do something different and Harry Groener is an excellent fix as a man so evil and determined and yet so charming and engaging to watch. How could you not laugh at his OCD like behaviour or wonder about his failed attempt of assassinating Spike. Unlike The Master and Spike and Drusilla, The Mayor is mostly kept in the background for the first half of the season so as down town we deal with Willow and Oz repairing their fractured relationship in “Amends” as Angel is driven into killing himself by The First Evil but the biggest thing in the 1998 aired episodes is the introduction of vengeance demon Anyanka/Anya who brought a whole new meaning to the concept of “be careful what you wish for”. Because in “The Wish”, Xander and Willow are vampires and underlings to The Master, Cordy gets slaughtered, Buffy is a nihilistic young lady and Angel is a bigger wimp than Wesley.

The latter half of the season is a mixed bag of stuff. While “Helpless” and “The Zeppo” aren’t personal favourites of mine, they are noteworthy for Buffy meeting the Council, having Giles tow the line between duty and love for his slayer (and suffering the price as well) and Xander briefly finding a sense of self worth after shagging Faith.

Faith’s storyline becomes the driving force of the remaining episodes as repeating the trick of sending an ally off the deep end (last year Angel, now Faith) works to the series gain yet again when Faith kills the deputy mayor and goes to extremes of blaming Buffy and turning on everyone left, right and centre. There’s great moments as Buffy, Xander and Angel all try to reason with her but the reckless actions of Wesley, the priggish replacement for Giles and Faith’s ultimate desire to embrace her darker tendencies (after dusting malicious vampire and Mayor lackey Mr Trick) see her allying with The Mayor in the superb two part episodes “Bad Girls” and “Consequences”. If you thought the dynamic with Buffy and Giles is brilliant to watch, then you’ll the one with Faith and The Mayor, no matter how twisted it happens to be.

The Scoobies versus Faith and The Mayor does get put aside long for Vamp Willow to reappear in “Doppelgangland”, Buffy to experience the crap side of having psychic powers while using Jonathan wonderfully in the polemic “Earshot” and of course the Scoobies to celebrate their prom, complete with hell dogs, Anya and Angel sensibly dumping Buffy in the not originally titled “The Prom”.

With these distractions then dealt with, the ongoing arc has moments of showing true colours and deception (“Enemies”), hostage taking (“Choices”) before the mother of all showdowns. While I prefer both parts to “Becoming”, the sheer genius of “Graduation Day Parts 1 and 2” has to be talked about. I mean let’s face it, Buffy and Angel finally parted ways (the latter getting his own series), Oz and Willow done the deed, Cordy and Wesley shared an embarrassing kiss, Xander and Giles something useful to do, The Mayor showed his love for Faith and we got probably the best girl fight in TV history with Buffy and Faith, all knives and handcuffs scrapping it out, which put Faith in a coma and Buffy nearly killed to save her lover. It also saw The Mayor turn into a giant snake, had him blown to pieces along with Sunnydale High, Snyder killed and the Sunnydale students beating the living daylights out of vampire and that nice self reflecting ending Oz telling the gang that they survived High School. This finale ended one aspect of Buffy but it did not end the goodness of this show because there is still quality material to come.

DVD EXTRAS: Like I said every season, more improvement and while adding the scripts are tedious, the other extras are fine. Once again we get four commentaries, this time David Fury on the so-so “Helpless”, Doug Petrie on “Bad Girls” and director Michael Gershman on “Consequences” (essential for all Faith lovers out there) and a hilarious one from the lovely Jane Espenson on “Earshot”. I love the obvious enthusiasm the writers and directors had for this series but no commentary for “Graduation Day Parts 1 and 2” – that sucks! Thankfully the in depth overview for Season 3 (on Disc 3 no less) is fantastic along with the features on “Buffy Speak” while Disc 6 caters to “Wardrobe” and “Weapons”. There’s also some stills and cast biographies if you’re interested as well.

Season Three is currently available on VHS and DVD