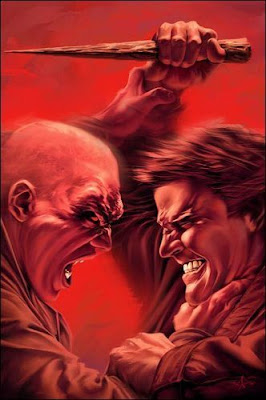 Fred: “Charles! Oh Angel, isn’t it wonderful? It’s beginning to feel more and more like home every day! I mean, more recent home, not “demons run/humans are cows”. Although it’s kind of like that too.”

And this comic is kind of like everything else we’ve seen in Angel’s sixth season so far. One minute you’re getting amazing stuff and the next you’re being saddled with a less than satisfactory story.

This issue unsurprisingly enough reunites Angel and Gunn after the two of them being apart for so long. Their face to face is a good set up but this is one issue I could’ve done without reading in a way.

Between friends dying, losing battles and becoming human, Angel discovering that Gunn has become a member of the undead couldn’t have come at a worst time. It also doesn’t help that Gunn’s minions seem determined to make their presence both known and felt at the same time.

Gunn’s sudden reappearance also inspires Illyria to morph back into Fred. At this point I just Fred back full time so I try not to get invested when this shell just coos about the gang being reunited. I suppose there could be an element of truth but this is too twisted and not the gang that I fell in love during the series hey days.

At least some action comes in Gunn’s henchmen trying to attack Angel. Instead of keeping his allies around, Angel forces both Nina and Fred/Illyria to get on the dragon and leave. On the plus side, the dragon at least scorches Gunn’s men. It would’ve been if the dragon hadn’t done that, right?

Of course just because the vampires get scorched, it doesn’t mean they’re dead and Angel has to put his fighting skills into use to do in the rest. Gunn in a show of kindness saves Angel by dusting one of the vampires himself. I would’ve loved for this to have been a hint that Gunn didn’t hate Angel but alas no.

Instead Angel discovers that Gunn has become a vampire and he’s pretty horrified by the reveal. It’s already documented that Gunn has been transformed into the very thing he hates but it doesn’t stop Angel from raising the point yet again. It’s also similarly transparent that Angel would second guess Gunn’s emotional state.

Is it really a shock that Gunn is trying to downplay his anger regarding his current predicament? Probably not but it’s definitely the most insincere form of downplay I’ve seen as well. Still some of the jokes he tries on, particularly ones about bald heads are alright enough.

In all of his guess work, Angel figures that Wolfram And Hart have had a hand in Gunn becoming a vampire. Gunn doesn’t alleviate the blame from them but he doesn’t focus too hard on it either. Still Angel does an incredibly stupid thing in following despite knowing full well that Gunn’s emotional state is erratic at best.

The Hyperion on the other hand just sees Spike trying to find out why Connor is irritated by his father. When reading that bit, it’s hard to determine whether Spike is genuinely concerned for Connor’s wellbeing or is just trying to stir thing. We already know that Angel has issues about the two of them being partners in crime.

Connor to his credit doesn’t give Spike any soot and decides to go back and save his father from impending doom. Gwen unfortunately tries to stick her oar in by concentrating on Connor’s trademark pouting. He can pout all he likes given that this isn’t Season 4 and that here; he’s easily one of the strongest characters going.

It’s also rather funny that Connor is playful in defending himself. Instead of getting stroppy, he gently reminds Gwen of her own whining abilities while giving us a brief rundown into the first time they met. The issue of sex raises its head too with both Connor and Gwen determined to find a way to be physically intimate with each other.

However this is all fine until Nina returns with dragon and Fred in tow. Nina explains about the vamps and then tells everyone that Gunn is their leader. This generates a reasonable reaction except for Spike being unconvinced that Gunn is a big bad of sorts. Although he raises a point about hell playing tricks on people, he just comes across as being a bit of a twat here.

Wesley also pops in to drop an opinion piece. It seems he’s also blissfully unaware of Gunn’s recent changes and wants to disbelief the theory that one of his closest friends is on the side of evil now. Connor thankfully interrupts all of this just by focusing on saving his father.

He does however assume too quickly that Gwen is going to try and talk him out of going on his hero mission. Fortunately for him, Gwen simply wants to back him up and let’s face it, having a mutant girlfriend is pretty beneficial during a mega battle as well as a big old dragon.

Fred meanwhile is too distracted with the idea of everyone coming. Apart from the obvious fact that we have yet to see Cordelia, Wesley’s right – nobody has come back right. So far we’ve Ghost Wesley, Vampire Gunn, Human Angel and the split personalities of Illyria and Fred. This comic is reuniting the gang, just not in a way that make you feel good as a reader.

Gunn meanwhile now seems to have taken Angel’s mantle for the old second guessing routine. Angel doesn’t have a chance to speak as Gunn yammers about what must be going through his former friend’s mind at the present. It’s not that Gunn isn’t making a valid point but it’s also not like we’re getting anything new either.

Angel tries to keep his cool. For the time Gunn doesn’t seem to realise that he’s human and suddenly Angel has to deal with a horrifying smell as well wondering what way his altercation with Gunn is going to go. The fact that Angel is preparing himself for the worst is good. The fact that he’s defenceless on the other hand isn’t.

Being a vampire in some ways does suit with Gunn’s sense of directness though. He immediately tells Angel when his transformation took place and does a better job of not sounding bitter when Angel was otherwise engaged. Turns out that while trading up for the dragon was also the same Gunn got to become immortal and develop a dependency for blood.

Introducing the rest of Gunn’s gang is less interesting. Apart from that brutish vampire who spent a few issues beating the crap out of Betta George, the rest of them are just generic and dull. There is however another uncomfortable moment when Angel sees a photo of the gang, which is a further reminder of the dystopian world our heroes have been shoved into.

Gunn seems to have a lot to say in this issue and while it might be insightful, he’s not imparting anything that you couldn’t already have guessed. There’s no secret in the fact that Gunn’s gang hates him more than their former leader and it’s also no secret that Gunn doesn’t entirely hold Angel responsible for the way things have gone down.

However comparing some of his actions to Angel’s seems a touch unfair. That being said the dead creature at least left Gunn some gifts to ponder over but between filling Angel in about Betta George and captive slayers; the one thing Gunn really wants is his old friend’s help.

Gunn has a desire to save Los Angeles and while he doesn’t get a chance to explicitly explain what the genius plan might be, Angel tries to talk him out of it. Proving that Angel’s initial fears towards Gunn were justified, the recently made vampire just loses it and Angel gets the savage beating he should’ve seen coming.

However while Angel is a dab hand at defending himself and slaying more of Gunn’s uninteresting gang, there’s a nasty taste left when Gunn stabs after stripping him of his glamour. So Gunn knew all along about Angel being human and worse is the pleasure he seems to take from seeing his former friend in agony.

The most confusing part of this issue though is Gwen. Gunn bragged about finding a “her” first and by the end of this issue it does look like Gwen has turned traitor when she apologises to Connor. Then again it could be a mislead. Perhaps there’s another “her” that Gunn is referring to, one that would have more of an emotional impact on Angel than just Gwen.

There are five different covers for this issue but the one I scored was a sword wielding Angel with a fire breathing dragon.

Betta George: “Wait a minute. That guy’s from your head, Gunn. He’s got Spike in his head! And why the heck is the dragon names that?!”

Since I’ve last reviewed this series, two issues of Spike: After The Fall have been released. I won’t be reviewing them.

Angel: “I, um – Was it … was it Wolfram And Hart?”
Gunn: “Nah, I mean, yeah, sure, in the sense that Wolfram And Hart was partially responsible for the big bang that the vamps in question used as a distraction, but no, not directly.”

The cover for Issue 12 seems to have Connor and Spike but I’m not sure if the woman is Fred or Gwen or even Nina. The artwork is still inconsistent with this range.

Fred: “Isn’t this exciting? Everyone’s coming back.”
Wesley: “It would appear so, only the problem is … nobody’s coming back right.”

This comic showed an ad for the Doctor Who arc “The Forgotten”. Given that said arc isn’t being imported for UK/Irish fans, I’m a bitter man over that. Still maybe I’m not missing out.

Gunn: “Man, see, that’s why you wore the Captain’s stripes for so long, you ask the good questions. “When” is easy, it was while you were trading up for the dragon.”
Angel: “Pardon?”
Gunn: “Wasn’t a riddle, Angel. In the alleyway. You were otherwise engaged.”

Gunn (re dead demon): “Many gifts actually. Then he passed on. I keep him up there for tribute.”
Angel: “Maybe you could bury him.”
Gunn: “It’s an idea or maybe just a drape over him.”

The visions we saw were of the sphere, Betta George, Wesley, Fred/Illyria and that demon Gunn had slain earlier on in the series.

Gunn (to Angel): “One of these things is not like the other. Should I turn you or feed on you? Bet you wish you could tell me what to do now, huh, old man? I kinda do, too. You know what? Gonna let you die. But you should shuffle off knowing one thing. I found her first.”

Issue 12 was released on September 4th along with Buffy’s “Time Of Your Life Part 3”. Reviews for both of them will come soon.

As issues went, this one annoyed me. The ending for “After The Fall Part 11” should have me on the edge of my seat but it didn’t. I can’t imagine that Joss Whedon or Brian Lynch would dare kill off Angel.

Nice Review dear!!! Angel is a show that is going to live forever because it never gave in and changed itself around in order to be more friendly for the masses. Its my favorite TV Show and never miss it. You can watch this show from here. So go ahead and download Angel Episodes free...