My Review of How To Get Away With Murder's 4x10: "Everything We Did Was For Nothing" 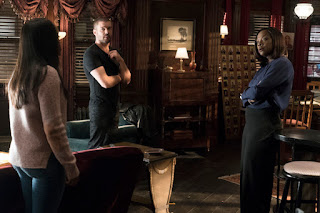 Last week's episode set something of a bar with it's cliffhanger. This week's episode managed to outdo it a little as a panicked Annalise and Frank assumed that Jorge was constantly calling the recently bumped off Dominic's phone. Except for the fact that it's actually Laurel's mother doing the calling and while we didn't see her, we certainly learned more about her this week.

It turns out that Jorge has a history of gaslighting the women in his family as his current attempts with Laurel showed a pattern he previously visited upon his former wife as Laurel got herself assessed by Isaac (who Annalise had to charm back into helping her being honest about her real motivations) and subsequently released from the hospital.

It feels like we could be going down a Scandal route with Laurel's parents or not but either way, Jorge's sinister presence is making itself known. When Tegan wasn't freaked out by Michaela contacting her, Denver threw Bonnie under the bus (who also seemed to be working against him as well) by giving her name to Jorge as well. Considering there's only five episodes left and Laurel really did unleash a shit storm by going up against her father, I'm guessing someone else could suffer the consequences of this family feud.

On the plus side, at least Laurel is taking responsibility for the mess she's largely caused and most of the gang are sharing information with each other, such as Michaela telling Annalise and Frank what triggered Laurel's early labour along with Annalise and Bonnie finally getting their feelings out in the open and hopefully moving forward with things as well.

On the other hand though, is Oliver going to be a liability for the gang? He didn't do himself any favours this week by going against Annalise or hacking Simon's hospital records. He also didn't help himself when he posed as Simon's boyfriend to go see him in the hospital but he did at least seem to take on board what Asher was trying to say in relation to the latter's past experience with Sinclair. Not entirely sure the situations are comparable but this was still overall a pretty nice moment in an episode filled with some great character bits.

Annalise and Bonnie's muddled relationship in general was given the best going over and I liked that Bonnie's feelings for Annalise were confirmed properly as there had been some ambiguity with the two for a while now. Annalise's conversation with Isaac was also similarly revealing but I do believe she cares about those kids, even if they do keep bringing trouble to her door.

- You gotta love how Frank literally disposes of Dominic's body in his car in broad daylight. I assume he paid those guys, otherwise that was extremely sloppy on his part.
- There's another Nate Lahey out there? We learned that thanks to Connor's continued pursuit of those other cases Annalise was doing in the first half of the season. This should be interesting.
- I'm expecting a possible Oliver/Simon pairing might happen when the latter wakes from his coma.
- Chronology: Five days since He's Dead.

Everything We Did Was For Nothing kept things moving along nicely. There's a lot of interesting potential with that reveal about Nate, the imminent arrival of Laurel's mother and next week's custody episode along with Jorge emerging as a big threat to the Keating 5.