My Review of American Horror Story: Apocalypse - The End 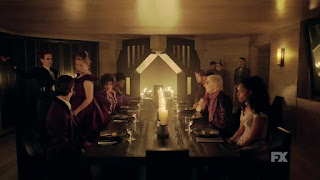 Mr Gallant: "What's happening out there?"
Timothy: "It's all gone."

Well, this is a season earlier than expected. Mixing the much clamoured for crossover of Murder House and Coven with an end of the world theme, I get the impression these were meant to be separate seasons but combined with certain actor availability and maybe an overlap in outcome, both ideas got merged into one. So far, that's fine by me.

It's not that far into the future where the world has begun to end. We first meet a vapid billionaire named Coco St Pierre Vanderbilt (Leslie Grossman) who along with her henpicked assistant Mallory (Billie Lourd), gay hairdresser Mr Gallant (Evan Peters) and the latter's wealthy grandmother, Evie (Joan Collins) are soon aboard a pilot-less plane heading for the only place that keep anyone safe from the apocalypse but of course, they are not the only ones headed to Outpost 3.

Among the group, there's a bright young man named Timothy Campbell (Kyle Allen) taken from his family due to his gene pool being top quality and a political protester named Emily (Ashley Santos) also inducted into a place for survival from prison. Right now, both Timothy and Emily seem more like our viewpoint characters than the other main players are for the moment. It also helps that so far they're also the most sympathetic of the bunch too along with a growing love for each other that will clearly violate Outpost 3's strict rules on intimacy.

Then there's Outpost 3 itself - a survival camp of sorts for the elite. It's a strict place where the worthy are decked out in purple and the servants gets to be dressed in grey as poor Mallory finds herself becoming unlike everyone else. Running the joint is Sarah Paulson's Wilhemina Venable, whom along with Kathy Bates's Miriam Meade seems to derive an enjoyment in abusing her own rules so she can sadistically torture her guests.

Keeping with the show's penchant for the shocking and because this episode needed an opening death, we got to see poor Stu (Chad James Buchanan) accused of being contaminated along with Mr Gallant and then shot/served as dinner, much to the disgust of his boyfriend, Andre (Jeffrey Bowyer-Chapman). Oddly enough though, Evie seemed to be the only one unfazed by the fact that she dined on a young man but given that the only other food option was those horrible gelatin looking cubes, it's a surprise none of the Outpost lot started eating each other to be honest.

With the episode greatly hinting about the outside world being unsafe and both Wilhemina and Miriam using that knowledge to infringe their harsh rules upon the survivors, there was surprisingly little of the actual crossover bits that the recent promotional material had been going to town with. Of course, the arrival of a grown up Michael Langdon (Cody Fern) at the Outpost at the end though did nicely signal that things were about to get very interesting.

- Opening credits has Sarah Paulson, Evan Peters, Billie Lourd, Kathy Bates, Leslie Grossman, Adina Porter, Cody Fern. Both Emma Roberts and Cheyenne Jackson are credited but neither appeared while Billy Eichner was Coco's now assumed dead husband, Brock and Adina's character, Dinah seemed to be a former TV personality.
- The credit sequence has a nice mixture of the music and images from both Murder House and Coven.
- Anyone else get an Interview With The Vampire vibe off Michael's general look? I think that was the intention more than the sparkly look from another vampire themed series.
- Chronology: It's in the future but when has yet to be specified. Standout music also included You Belong To Me.

I can definitely say without a doubt that The End was probably the strongest opening episode we've had since the fifth season and while I can understand some fans being disappointed that certain fan favourites haven't shown up yet, there are nine more episodes to go. This one did a great job with introducing our main players and the post apocalyptic stuff certainly looked effective enough. A great start for a very promising season.