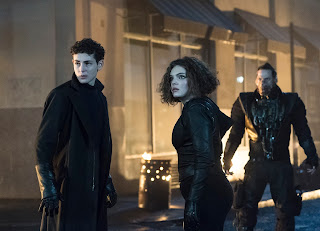 Alfred (to Bruce): "But I want you to know Master Bruce, you are the only son that I will ever have and I could not be more proud."

I think if you didn't have the tiniest little bit of a tear during that scene, then you're obviously made of stone. For a penultimate episode to the series finale, this set the bar rather high with the No Man's Land/Nyssa/Bane plot coming to an end and Bruce departing his city for a decade and it did so with style.

First of all, it was cold of Bruce to leave Gotham without saying goodbye to Selina, especially as she opened up to him big time this episode and played a vital role in helping him take down Bane and Nyssa. At the same time, while Bruce must become Batman, it's also down to Selina to become Catwoman and seeing that reunion next week should be very interesting indeed.

However I should add that this episode marked the departure of Camren Bicondova in the role as Selina Kyle and that Catwoman in next week's series finale will be played by Lili Simmons instead. Camren already articulated on social media her reasons for departing the role and while I wish she was in the last episode, I do want to thank her for the brilliant work she did for five seasons as Selina Kyle.

I did like the use of bats as a means of initially setting Bane back and it's clear that Bruce picked up on an idea there as well during that particular fight scene. Then there was all of the regulars (including Oswald and Edward) standing up to Bane and his army before the latter was surprisingly not killed off and sent to prison instead. The show has often pushed it's luck with killing vital characters, so it was a relief that both Bane and Nyssa actually managed to survive their humiliating defeat this week.

I did think when Nyssa got stabbed by Barbara with the same knife that her father was stabbed with last season that she was going to die, but instead she managed to get into the submarine and leave the city, complete with an adorable pet to look after and probably rename. Goodbye Edward the dog, I think I'll miss you the most, you adorable scamp.

Villain wise though, I do think the show could've handled both Nyssa and Bane a little better. It does feel like the show got too enamoured with Jeremiah and Ecco at times (and the former was mentioned a lot here) that the focus on the two main antagonists for the season wasn't as strong as it could've been. On the other hand, at least we know they're still out there to cause future headache for everyone when the time comes.

As for Gordon - this episode did reward him for his heroics while also reaffirming that in spite of their own contributions towards saving the day, both Oswald and Edward are still villains and the city has only barely seen what a partnership between the Penguin and Riddler will be truly like. We definitely know they're both up for a costume upgrade in the next decade along with three other characters next week.

- The baby was named Barbara Lee Gordon after her three parents and she wore purple like her future self will do. Jim also became Commissioner and the city rejoined the main land.
- Oswald lost an eye this episode and for a moment, I thought we were going to get him and Edward stabbing each other. Wayne Enterprises also went boom in this one too.
- Even though we're unlikely to see Dick Grayson in next week's series finale, I did like the fact that the episode found a way to reference Nightwing.
- Chronology: The final day of No Man's Land.

They Did What provided a slightly less bombastic resolution to the overall season plot than expected but it was one that largely worked in the episode's favour. There were so many character moments here that I adored but if I had to pick five, I'd go with: Barbara/Leslie, Bruce/Selina. Bruce/Alfred, Oswald/Edward and Jim/Barbara/Lee. I'm going to seriously miss this show when it ends next week.