EastEnders Gets It's Gay On Again

Okay, bit of a loaded headline there and in the first of a few LGBT themed blogs for the Month of Pride, it's time to have a look at the UK soaps and LGBT coverage over the last while, in particular with EastEnders. 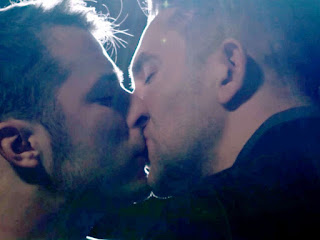 You have to give Kate Oates her due. When she likes a storyline, she'll do it again and again and here she's only gone and done it on EastEnders. It was obviously that Ben Mitchell No 6 (Max Bowden) in between laughably stupid wannabe gangster storylines was going to get with an established male character on the show instead of a new one and the guy in question has turned out to be Callum 'Halfway' Highway (Tony Clay) and while I don't think this relationship will ever hit the social media popularity of Robron or Kana, it does manage to feel surprisingly believable. Halfway is probably the only male character currently on the show they could've done this with and while we're in the early stages of this particular pairing, including Halfway's own denial about his sexuality, it's off to an interesting enough start, story wise. Add to the fact that Halfway and Stuart's (Rick Champ) own father will be joining the show soon (and he seems like a right bastard, going by the summer trailer), not to mention a budding wedding with Whitney Dean (Shona McCarthy), this is going to get very peak soap fairly soon. 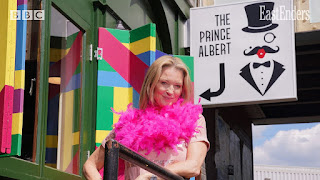 Halfway and Ben's budding relationship also comes around the same time that Walford managed to get itself a gay bar. Well, Ben's mother, Kathy Beale (Gillian Taylforth) came into some money, bought the Albert and renamed it the Prince Albert with Tina Carter (Luisa Bradshaw-White) being appointed as manager, getting her out of the Queen Vic for good measure too. For Tina, this should be a good venture as the show's treatment of the character over the last few years has been rather appalling from time to time. It's also nice that Oates seems determined to try and modernise the show as she did with both Emmerdale and Coronation Street and it's good to see the BBC not try and stop her either. 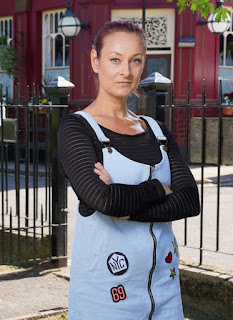 In terms of LGBT characters and stories, it's nice to see in a short space of time, how much of a positive impact Oates has made. Yes, we have the Halfway/Ben pairing, the arrival of a new gay bar and purpose for Tina, the show due to celebrate Pride and even Bernadette Taylor (Clair Norris) getting a brief love interest with Brooke (Ria Lopez), even if she still has feelings for best mate, Tiffany (Maisie Smith). Aside from the increased prominence in LGBT storytelling, the writing overall has taken a turn for the better and the show feels as exciting as when Dominic Treadwell-Collins had the reigns from 2013-2016. Hopefully this renewed quality will be around for a while to come. 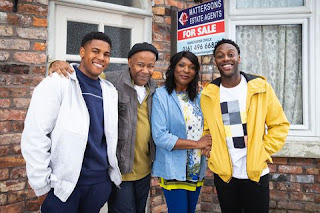 Of course, it's not just the Square that's been prominent with LGBT storytelling for the last while. Coronation Street has had a slew of LGBT characters, storylines and relationships and the current stories are a mixed bag. Earlier this year, we saw the death of Rana Habeeb (Bhavna Limbachia) and it seems her partner, Kate Connor (Faye Brookes) will be exiting the soap soon while Sophie (Brooke Vincent) has had her own relationship ups and downs with lawyer, Paula Martin (Stirling Gallacher), not to mention Billy (Daniel Brocklebank) getting together with former jailbird Paul Foreman (Peter Ash). Elsewhere Sean (Anthony Cotton) has had a brief storyline concerning homelessness that was a bit rushed while a new family arriving this month - the Baileys will have a gay footballer son, James (Nathan Graham) who befriends Bethany Platt (Lucy Fallon). Either way, it's nice to have another new family on the cobbles and the issue of homophobia will also be explored with James. 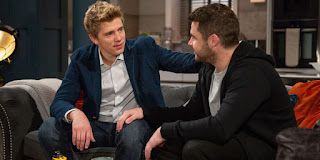 Moving over to the most dangerous village in the land of soaps, there's still the power couple of Robert Sugden (Ryan Hawley) and Aaron Livesy (Danny Miller) in Emmerdale. Yeah, I've never been a fan of this pairing and while I'm more lukewarm on them nowadays, I do keep wishing the show would give us another gay/bi male character and for said guy not to be a plot device or spare part but I think I'll be waiting a while there. There's also Charity Dingle (Emma Atkins) and Vanessa Woodfield (Michelle Hardwick), who are enjoyable enough while the show has furthered explored Matty Barton's (Ash Palmisciano) transitioning in a respectful manner. 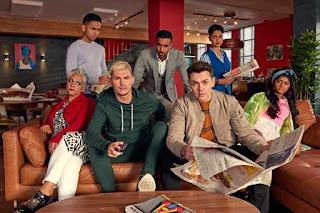 Last but by no means least, there's also Hollyoaks, who have always been varied with their LGBT characters and storylines. In recent months we've had departures from Kim Butterfield (Daisy Wood-Davis) and Farrah Maalik (Krupa Pattani) as the latter was also involved with Grace Black (Tamara Wall). The strongest characters aside from Farrah have been the show's school principal, Sally St. Claire (Annie Wallace), a transwoman whose relationship with Myra McQueen (Nicole Barber Lane) ended, even though they still have a son with John Paul (James Sutton). Sally has been one of the strongest characters on the show along with gay lawyer, James Nightingale (Gregory Finnegan) while Scott Drinkwell (Ross Adams) and Kyle Kelly (Adam Rickett) have had hit and miss storylines as well as Harry Thompson (Parry Glasspool) in recent times. Currently the show is exploring a far right storyline with long term regular Ste Hay (Kieron Richardson) being groomed by Jonny Baxter (Ray Quinn) and Staurt Sumner (Chris Simmons) that has definitely had the desired effect in being both compelling and uncomfortable viewing as we've seen them terrorise the Maalik family over the last few weeks to the disgust of everyone in the village.  Of all the UK soaps, this has always been the one with the most eclectic and diverse of storylines.

Well, that's a round up of the current soap goings on for LGBT storylines and characters. Any of these stories that you're enjoying/not enjoying? Anything you wish these soaps would cover or do less of too?
Posted by shawnlunn2002 at 5:05 AM