With Swamp Thing now concluded, the DC Universe have focused their attention back to their first live action show Titans as yesterday saw a release for the trailer of the upcoming second season and we've got a lot too look forward to.

The Dark Knight Appears: In the first season we got the classic "Fuck Batman" line and when I say classic, I mean it became an instant meme as well as a misplaced attempt on the show's part to be a bit too gritty for it's own good. In the first season, Batman did appear in Dick Grayson's (Brenton Thwaites) nightmare world, courtesy of Trigon (Seamus Dever) but this season former Game Of Thrones actor, Iain Glen will be playing the older Bruce Wayne and it looks like we'll see his relationship with Dick onscreen. Whether or not we'll see Glen don the cowl remains to be seen though.

The New Titans: As Jason Todd (Curran Walters) seems to be rather proudly declare on live air - "Titans are back, bitches!" and he's not wrong. Even though there's still a Trigon sized cliffhanger to resolved (and he was nowhere to be seen in the trailer), we did see Dick inform Rachel Roth/Raven (Teagan Croft) that they're a team and there's a few nice shots of our main players, including Beast Boy (Ryan Potter) and Starfire (Anna Diop) getting into some scraps this season. 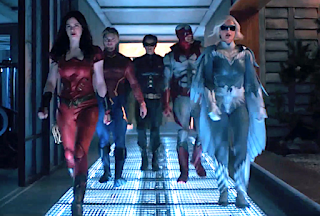 The Original Team: One of the standout moments of the trailer was the costumes and unlike last season where they seem to be sparingly used, this season might be a little different on that front. We got some I assume flashbacks to the original team with Robin I (Thwaites), Wonder Girl (Conor Leslie), Aqualad (Drew Van Acker), Hawk (Alan Ritchson) and Dove II (Minka Kelly) and with Donna, Hank and Dawn all getting bigger roles this season, it's nice that we're getting to see Garth as well, though I am hoping we'll see him in the present day as well.

Newbies Galore: The most noticeable thing about this upcoming season is how much larger the cast will be. Coming back from last season are Robin I, Starfire, Raven, Beast Boy while the likes of Robin II, Hawk, Dove and Wonder Girl are getting rightly expanded upon. We can also add Joshua Orpin's clone, Conner Kent/Superboy and Krypto into the mix and even then there are still more names that can be added to the roster for this season. 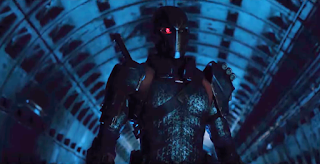 Meet The Wilsons: In terms of big bads, this show still has the task of putting the Trigon plot to rest and it seems like it'll be done rather quickly as one of the greatest assassins - Slade Wilson/Deathstroke (Esai Morales) will be making his presence known, and he'll be joined by his kids - Joseph/Jericho (Chella Man) and Rose/Ravager (Chelsea Zhang) as we got to see the three of them make an impression on our main cast in the trailer. On top of that and tying in with Superboy's presence on the show, we've got Cadmus to contend with this season and on that front there's Lex Luthor's right hand woman, Mercy Graves (Natalie Gumede) to deal with along with scientist Eve Watson (Genevieve Angelson). Whether or not Lex himself will materialise later in the season remains to be seen.

For a minute long trailer, they certainly packed a lot in there, went with a thankfully less angsty tone than the first season and with the amount of characters being added into the mix, it appears that Titans means business for it's second season.

Titans second season will premiere on DCUniverse from September 6th.
Posted by shawnlunn2002 at 5:35 AM