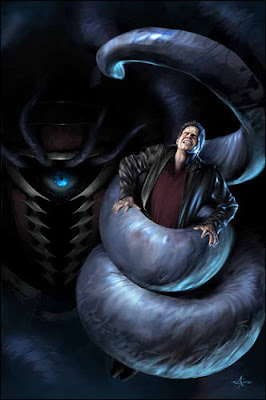 Spike: “I’ve bounced back from worse. Did I ever tell you about the time I was burnt to a crisp saving Sunnydale?”
Connor: “Very often. But he’s not … he’s not going to bounce back like before, Spike. Angel’s human, Gunn’s a vamp.”

After something of a lengthy disappearance, the opening page of this comic sees that Groo hasn’t perished in the midst of all the hell that has been unleashed. I’m sure there are many readers who are either very relieved or less enthused with such an outcome.

Of course Groo is also in the midst of an air fight with one of the many dragons that have appeared out of nowhere but thanks to his own little weaponry, he’s in no immediate danger. Unfortunately he does remind us of Spike’s little harem and let’s be honest, we could do without seeing these particular groupies for the time being.

Elsewhere while Angel’s monologue dithers on about the powerfulness of Wolfram And Hart (tell me something I don’t know), some of the fighters down below are curious as to how they can’t enter Gunn’s apartment block. Would the fact that it has magic all over it be a possible clue?

Inside the building itself, Angel’s still broken and Connor and Wesley are determined to get him out of the building. Spike makes the usual bout of insensitive comments while dredging up the fact that he burnt for Sunnydale before Connor’s forced into admitting that Angel’s human.

While Spike’s reaction to such information is hardly the most mature, it’s a lot better than I was expecting of him. Angel on the other hand just detects that Spike is nervous upon hearing such news. Seeing Spike in a somewhat flustered mode is amusing, even if the Shanshu prophecy is still heavily on his mind.

More interesting than Spike’s nervousness, is his condemnation of spoilers. Wesley’s prepared to fill him in on some recent developments but Spike seems to be no mood to hear it. Given that this hellish place is living up to it’s namesake, I wouldn’t be so hasty to dismiss any advanced information if I were Spike. I’m just saying.

Gunn on the other hand is semi-apologetic mode. Personally I’d care more if the person he murdered was Fred but seeing as its Illyria, I’m less enthused. Obviously I want to know why Gunn decided to kill the destructive Hell God but listening to Gunn make with apologies isn’t interesting.

Fortunately he gets over that stage quickly enough and demands that Illyria should use her true form and stop using Fred’s visage. This I can empathise with but Gunn is seriously deluding himself if he thinks that he’s still the same guy he used to be. The Gunn we know certainly wouldn’t have pulled off all this crazy shit that’s gone on in the last few issues.

Cruel jokes about Angel losing another girlfriend aside, Gunn is determined for Illyria to take her own form. There’s another time jump where Gunn talks about having a breath but it doesn’t add much except that he obviously wants to become human again. I also want this plot to make sense.

Some dragon attacks later and Gunn is dragging Illyria’s body to Wolfram And Hart. I’m not exactly sure how Illyria is supposed to get the gang out of hell but once again, Gunn seems ridiculously convinced that she will. Never mind the fact that Gunn has been pretty much wrong about everything else so far in his insipid scheme then.

Below the apartment blocks, you’ve still got Angel, Wesley, Spike and Connor on a mission of their own. Spike’s convinced Angel can be saved. It seems that Gunn is using the time slips for training purposes on the captive slayers, which also explains why Spike survived the last issue as well.

When Wesley asks why Spike seems to remember about the time slips, the special comment is just him being egotistical but the fact that Spike might have ruined the seal does seem more likely. His joy for thinking he might have a spare cigarette stops him being insulted by Wesley’s neat deduction.

The bad thing is that the seal only fixes things within a five minute period and Angel’s been broken for a lot longer than that. Connor’s naturally pissed off that his opportunity to save his father is down the tubes. He’s also less thrilled when Spike suggests siring Angel again.

Connor’s against the idea of brining back Angelus and honestly, who can blame him? Then again, it is an option that they might have no choice in, even if it is giving Wolfram And Hart what they want. However the one thing I wasn’t banking on was a horde of demons coming in and snatching Angel from everyone.

The demons are revealed to be conduits for the senior partners and they seem determined to raise him from the dead. After all, a dead Angel is useless to them and Connor and Spike aren’t able to put up much of a fight anyway. We should happy that Angel is being raised from the dead but I’m too annoyed and confused with this arc to be so.

Even Gunn’s reasons for wanting to use Illyria are annoying as is his need for George the fish to help with the ritual. However the conduits interrupt the proceedings by tossing Illyria out of the sacrificial spot and adding Angel instead into the mix. The saddest part is having the confirmation that there is no part of Fred left in Illyria.

While Angel might be raised from the dead, Illyria’s decided that she’s had enough and morphs into that lovecraftian formation of hers and decides to end all of reality, something that only Gunn seems to view as a good thing while everyone else looks appropriately worried.

Yeah, I remember Davros failing to do a similar thing in the Doctor Who episode “Journey’s End” but at least I was gripped by that. Here, I just want to see Illyria destroyed, everyone out of hell and for this plot to make some actual sense because right now, I’m really getting fed up with this arc.

The cover I got were various guises of Angel that we’ve seen through the past 14 issues.

Wesley: “It’s not Shanshu but, um. We’ve been told how that will go.”
Spike: “Don’t tell me, I hate hearing the end of a book before I get there.”

The other girlfriend that Gunn alluded to was the death of the Cordy dragon. We don’t know if Gwen’s definitely dead though.

Illyria: “I enjoyed sparring with that dragon. It came close to being an equal.”
Gunn: “There it is! Now that is un-Fred. Go with it. Channel your inner monster. Trust me, it’s not that hard. Sooner rather than later because as much as I’d like my friend back – I need Illyria.”

Spike: “Quite frankly, I think it’s because I’m special. The thrice-saviour.”
Wesley: “Could be you created a hiccup when you broke the door. Ruined the seal, that sort of thing.”
Spike: “Exactly. Takes someone special to kick a door down. If not, every sod would be doing it. No need for knobs.”

The other cover for this issue has Angel trapped with the Lovecraftian Illyria.

Spike: “Kid, I’ve fought alongside Angelus. Not a bad place to be as long as you watch your back. Nothing’s going to happen to you, I’ll make sure of that and then Wesley can figure out how-”
Connor (re Angel): “He’s rather die. He turns into Angelus, that’s how they win. That’s how he brings about, the, um-”
Wesley: “The fall of all that is good. Only it’s not Angelus. He’ll have a soul. It’s Angel’s hands that are bloodied.”

Vampire: “Do I have to come in here with him or I can just toss ‘em? The room creeps me out-”
Gunn: “You’re making the moment of truth all kinds of annoying. Get the damn fish.”

I think I briefly saw Nina in this comic, which means that Lorne is the only other regular who needs to resurface soon.

Illyria (to Wesley, re Fred): “Her memories haunt me. I see what she is to you and I want it. But she’s not part of me. No matter what time I bring us to, no matter the reality I mould, she’s not coming back and worse, you aren’t coming back. I’m the most powerful being in hell and I can’t have what I want. I can’t even have what Fred wants. There is no order here.”

Betta George (re Illyria): “You’re not getting it. She’s going to end it all. Underline, bold-face. She’s collapsing time. She’s had it with existence.”
Gunn: “That’ll work.”

The next issue is out on December 31st, two weeks after Issue 20 of Buffy.
At this point in the comics, the tedium is setting in and I’m not loving where this arc is going. I like dark material as much as the next person but this is too nihilistic and worse still, doesn’t seem to be making any sense or progression at all. Please sort this out because this is one seriously bored reader.