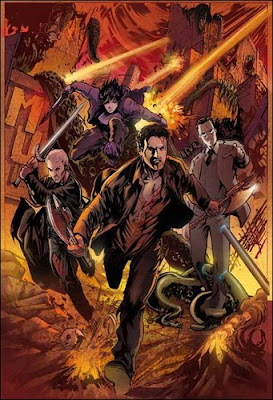 Betta George (to Gunn): “You forced communications with Illyria! Well, I got her talking and she doesn’t wanna stop! She wants – it gone. She wants it all gone.”

I never thought I would say this but for once I can actually relate to something that Illyria wants. Given that by early next year, we’ll be moving into an “Aftermath” of this crap, I would really like to forget all of this ever.

Since reading the latest issues of Angel, I’ve actually felt like I should be on Grumpy Old Men because despite this issue being eventful, I’d still rather focus on the negatives of it. I know that’s probably not going to make me popular with certain readers but if it helps; I’m usually a lot more positive in real life.

Picking up from the last issue, Illyria’s morphed into her true form and let’s face it, she looks hideous. On the plus side, she’s as desperate to get out of hell as the rest of us and at least takes matters into her own array of tentacles. By that, I mean she’s destroying everything in sight.

Angel broods about this and for the last few issues, his brooding has become somewhat repetitive but at least I can still sympathise with him. Yes, Wolfram And Hart have screwed him over but if doing nothing is as damaging as trying to do something, then what the hell is the point of this whole arc anyway?

Someone more sympathetic than Angel is Betta George, who now has to endure Illyria’s thoughts as well as her insane ranting. Gunn’s little to no use either as he just moans about what Illyria’s screeching. It seems that Illyria is going for the slowly in her bid to decimate everything.

Groo on the other hand leads a series of deaths that befall this issue. Given that Cordy, Wesley and Fred are dead forever and that Spike and Angel died, only to be brought back, I do wonder if Groo’s fate is just as severe as this issue would like readers to think it is.

With Spike’s harem and Groo all failing to best Illyria, the debate of whether or not there’s some Fred left in her is resolved – there ain’t and that to me only fuels my desire for this character to be done with, once and for all. Wesley however seems a tad sympathetic to Illyria’s desperation for wanting to have a bit of Fred inside her.

Its part of this desperation that has Wesley deducing that Illyria is acting out in a destructive manner because she thinks it’s what Fred would do under the circumstances. Shouldn’t this only go to prove that Illyria doesn’t actually know Fred as well as she thought she did? Fred would never advocate this level of destruction, that’s for sure.

Still at least Angel’s wise enough to make with a plan to destroy Illyria, even if it is the simple approach of beating her to death. Getting past Gunn’s irritating groupies however is a bit of an imposition until those captive slayers are actually put into good use by making dust of Gunn’s lackeys.

It also gives Angel the much needed chance to take care of Illyria once and for all and there’s a brief time slip where it looks Angelus is enjoying the slaughter of dozens of dead folk, only for Angel to realise his dark future is his own doing. With more allusions that Illyria’s doing good than bad, Angel still prepares to take her down.

At least he’s got Spike, Connor and Nina in his fighting corner and there’s even a delightful moment from Spike where he lays into Wesley’s need to whine about Fred’s death. I have to admit that Spike’s inappropriate humour in all this angst is exactly what is needed of this series right now.

That and Angel’s continued devotion to protect Connor, which means a scene where he tells his son that he needs to last as long as he can. Unfortunately Connor doesn’t even get that far when an irritated Gunn decides to stab him with Groo’s fire sword. If I hadn’t come to loathe Gunn as a vampire before, I certainly have now.

Even more annoying is that Angel doesn’t dust him there on the spot. Given that Gunn has caused things to get worse, I wouldn’t have thought any less of Angel for ending his existence there but the problem is the writer think that by not killing Gunn, we’re still seeing Angel’s compassionate side.

The death of Connor feels like a last straw and like Illyria, there’s no vestige of Gunn’s humanity left. He might be deluded enough into thinking that his actions are heroic but there has been no evidence to back that up I’m afraid.

All I hope that within the next two issues that the writers just kill of Gunn but it won’t be by Angel’s hand because he thinks it’s exactly what Wolfram And Hart want. If that’s the case, then maybe for once Angel should give the evil law firm what they want because it’s not like refusing them has done him any favours so far.

Angel leaves off killing Gunn to sort out Illyria and it’s no surprise that once again, Betta George pops up to be useless. Needless to say that Spike’s history with the fish is also briefly alluded to. However Angel’s idea of Betta using Fred’s other memories from Wesley and Spike is clever, I’ll give him that.

Fusing Illyria with more of Fred’s memories has the desired effect. She’s unable to take it all, making herself vulnerable. More importantly, it’s enough for Wolfram And Hart’s dragons to go in there and finish her off. Well while her death isn’t as blatantly obvious as either Groo or Connor’s, I really do hope she’s finally gone.

As for Connor, the poor lad might be dead but he held on long enough to leave his father a little parting gift. Okay so its just him telling Angel to defeat Wolfram And Hart but it’s a poignant scene and it sucks that we’re getting another death with this series already.

The cover I got was with Angel, Spike, Wesley and Connor amidst more destruction in hell.

Angel (to himself): “And just when I think they’ve sunk as low as they can go, they turn one friend into a vampire bent on killing me and saving the world and push another into killing the world altogether. It all ends with a girl.”

Funny that Angel should say the last thing as his mission originally started because of a girl.

Groo: “Oh this looks insurmountable. This death is hardly glorious.”

Angel (re Illyria): “Okay, best way to stop a ten story Godlike monster from destroying existence? I’m gonna go with hitting, you have anything?”
Wesley: “You took mine.”

Buffy was briefly reference when Angel talked about the slayers being trained well in battle.

Wesley: “It’s hard, I know-”
Spike: “I didn’t say it was hard. I’m dealing with it. We’re all clear that’s not Fred, Fred’s not homicidal, Fred’s shorter. Bloody hell, do you have to whine about everything to be part of this club? Let’s make with the brawling.”

Angel found out in this issue that Cordy the dragon was killed. We still don’t know if Gwen’s definitely dead either.

Angel: “We don’t have time for this. You fancy yourself a hero, you say you haven’t changed, you help us. And then, if the smoke clears, you can still air your grievances with knives, swords, lasers, your pick. But not now, Gunn. Not now.”
Gunn: “No Angel. Now would be good. You don’t tell me how it’s going to go! You’re weak! You’re nothing! And that’s for the window, kiddo.”

Angel (re Gunn): “You heard him. Do it. Not because it will save the day. Not because it’s right. Do it because he just mortally wounded your son. So help me … I could become what they need. It’s in me. Kill Gunn, kill Illyria.”

There are some ads in this issue for the comic version of the episode “Smile Time”. I think I’ll just stick to the Season Five DVD thanks.

The next issue should be out the second week of January 2009.

Yet another mind numbing frustration of an issue, I’m not sure I want to continue with this comic series. “After The Fall Part 15” may have been eventful but I’ve got so jaded when reading it that Connor aside, none of the deaths actually elicited a real impact for me.