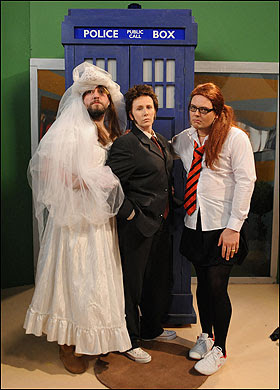 I think most people know the drill by now regarding reviews for this particular show. It’s not something I normally review but if there’s someone from Doctor Who hosting it, I make the exception and following Billie Piper, David Tennant (twice) and John Barrowman, we’ve got another person from the fave sci-fi series on hosting duties.

This time around it’s Catherine Tate and given that’s been a while since she’s been on TV (I think her last TV appearance was the tribute to Geoffrey Perkins), I have to admit I had high expectations for her episode, which delivered of course.

Catherine might get a lot of flack from her hit sketch show as well as a reasonable amount of praise but one thing I’ve found evident is that the woman is naturally funny. She had me in stitches when her and David Tennant were on Jonathan Ross back in April last year and suffice to say, she does play a blinder here as well.

Hosting the news segment is always going to be funny but it didn’t surprise that the first five minutes would see Alan and Justin needle her about Doctor Who, including of course her own thoughts on Matt Smith being cast as the Eleventh Doctor. Much as I like Alan, he does tend to take the piss out of sci-fi stuff a bit too much and it’s kind of sad that we do get to hear about the more negative aspects of fandom in moments like this.

Catherine admitted herself that she was a bit stunned when she learned that a minority of viewers really didn’t want her on Season 4 of Doctor Who. I have to admit that I had reservations but I’ve also admitted on enough occasions how brilliant she turned out to be.

More interesting was her mentioning that one fan wanted to paint her breasts. As a Doctor Who fan who collects certain merchandise (DVDs, actions figures, some books) and has dabbled in some fan fiction writing (nothing overtly slashy I hasten to add), I do have to ask – where do these people come from? That being said, Catherine did seem to deflect the fan’s request pretty well.

In terms of the sketches, there was some fun to be had. Catherine did make for a rather fetching Doctor and Justin looked pretty close to “The Runaway Bride” Donna as best he could while Alan missed the point and posed as Lauren. The Big Brother sketch also raised a smile but taking the piss out Big Brothers has always one of the reasons why I keep watching this show. Plus the Lady Gaga one did stir some thoughts of Little Britain for obvious reasons.

Of course, there were some interesting tid bits revealed about Catherine during the show – one of them being that she’s not a great cook. This provided a decent source of comedy when she, Alan and Justin did a Celebrity Come Eat With Me but she still managed to beat the pair of them. Seeing as I’m unlikely to pose a threat to Gordon Ramsay culinary wise, I’m not exactly going to criticise her for.

The quiz section was definitely another good moments. It was nice that we got another Doctor Who person with Bernard Cribbins and Catherine’s definitely not above shocking an 80 year old man when he gets something wrong. The question though however was a bit too brief and I was kind of hoping that we would’ve gotten more on that.

I suppose the reason why is that aside from being asked if she was bullied at school for being ginger or if she had a nickname on the Doctor Who set, I was kind of hoping if someone was going to ask if she was coming back to Doctor Who but given that filming has now started for the 2009 specials, I’m sure I’ll find out the answer to that in due course.

- The quiz section is missing. I have to admit to being glad with that seeing as I usually tended to tune out during those. The Local News part is a decent replacement.

- Alan and Justin did a spoof of sorts of the Donna/Naked Doctor scene from “Journey’s End”.
- Catherine admitted that originally Tony Blair wanted to do a sketch with Nan but she pointed out that you don’t win with Nan. She also joked (presumably) about maybe doing something for Comic Relief.
- Catherine’s Mutya impression was a bit Lauren-esque or was that just me? I still think Coolio’s a bit of a div though.
- No prank segment in this episode. Those are the parts I tend to enjoy with this series.
- Imagine being a girl in a school full of 300 boys. Wow.

Quote Of The Episode

Catherine Tate (about Matt Smith as The Doctor): “He’ll be the first Doctor to travel in the TARDIS with his parents”.