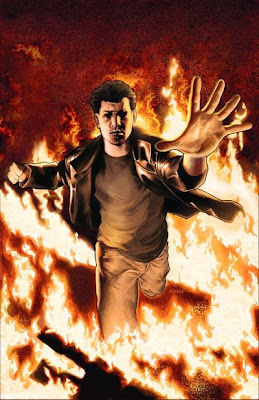 Stranger (to Angel): “I saw you in action, back … a while ago. I was a slave. For Burge, he’s the one with the lobster claws. Anyway Burge made us go to the battle with the dinosaur and the exploding and what have you. You, uh, you freed me. Heh, you freed everyone.”

As hell gets further and further suckier with each passing issue, a ray of light is finally offered as “After The Fall” limps to a conclusion. Last issue we saw Angel faced with the death of Connor so needless to say that his mood has been somewhat tempered because of it.

Connor’s death has Angel suffer yet more grief and even Gunn, the very creature responsible for Connor’s demise is telling everyone to let Angel. Wesley tries to get Angel back on track but Spike stops him in his tracks. As a reader, I’m personally looking for Angel to get his own back.

He certainly entertains the idea of ending everyone in sight. Wolfram and Hart through a dragon are content with taunting Angel on a ridiculous level. They even up their cruelty in joking about sprucing Connor’s body up.

Angel’s reaction to shove a sword through the bloody thing’s throat. His desire for a bloodbath is certainly there and once again, you’ve got Wesley wanting to stop him and Spike insisting that Angel should be allowed to work through his grief. I’m actually undecided as to which one of them has the more valid point.

The one thing that is still being rammed at us is that Wolfram and Hart are able to kill Angel. Wesley gets that out of their army of minion and because of all the crazy shit that’s been happening here, they’re willing to reach into Angel’s timeline and put him in a place where he isn’t in as bad a predicament.

Wesley does wonder about the slayers but Angel thinks more of Gunn and there’s a realisation that once everything is reverted that Wesley will no longer cease to exist. Seeing as this whole arc hasn’t done much for him, that might not be a bad thing but it lacks dramatically as a send off to the character.

There is some fun teasing from Spike about the closeness of Angel and Wesley. If you’re a slash bunny you might have gotten a wicked laugh from it but Spike is put to better use by helping keep the army back while Angel and Gunn square for another confrontation.

Even despite all of the evidence that he’s been seriously played, Gunn still believes that there’s a part of him that was right all along. He’s also still willing to lay the blame solely on Angel but this time around, it’s Angel who continues to gain the upper hand in all of this.

Also against the orders of an evil law firm, Angel is still determined to get his point across with Gunn. Wolfram and Hart still threaten Angel but even they can’t be dumb enough to realise that Angel seems done with falling in line. As for Gunn, he certainly gets the crap kicked out of him before he gets to effectively kill Angel all over again.

As plans go, it’s a good one from Angel – get Gunn to end his own timeline so Wolfram and Hart have no choice but to return him to his natural time and it’s one that Spike also realises as quickly, prior to saying goodbye to Wesley. Still there’s a nice moment between them in regards to Fred and Illyria.

As for being returned to the last few minutes of “Not Fade Away”, I know that Retconning isn’t well looked upon but I’m happy with the idea no less. With all of the knowledge of the hell they’ve endured, Angel, Spike and Illyria make an effort to stay on top of things.

The first big thing then for Angel is save Gunn from being turned into a vampire because God knows how crap that development was. Having Spike and Illyria doing battle with all the other demons certainly made things easier for Angel. Heck, even Illyria is keen to see Gunn survive.

Two interesting things do happen towards the last four pages of this issue. The first one being the disappearance of Wolfram And Hart. The evil law firm’s building is no more and it’ll be interesting to discover how or why this has come to be. Surely, they’ll have to resurface to create more anguish for the Angel team.

The other interesting bit is that the Angel and Buffy verses collide. Because of Harmony publicly outing vampires, Angel is now seen in a much positive light and the people in the hospital and the street recognise him.

Angel’s reaction upon knowing that the public are privy of supernatural creatures is brilliant. He’s got every right to be worried but his worry is also sidelined for the fact that him and Connor have a brilliant reunion scene. That is easily the best thing about this issue.

The cover had shards of glass with various characters and images from the previous issue.

Angel (re Wolfram and Hart): “Killing them won’t bring my son back. Won’t make Gunn whole. Won’t help Illyria. It won’t save Los Angeles. But I want a bloodbath. I want them to suffer.”

I’m pretty sure there’s another brief cameo from Nina somewhere in this comic or maybe it was just one of the random slayers.

Wesley: “Being your friend and fighting by your side has been an honour. Now go.”
Angel: “Thank you, rogue demon hunter.”

Spike: “What’s that all about? If he wasn’t see through, you would’ve kissed, wouldn’t you? I got that vibe.”
Angel: “Spike, I’m gonna need you to keep the army back.”
Spike: “Why?”
Angel: “Can’t say out loud. You’re going to have to trust me.”

We got more raining of fire in this comic as if we didn’t need any more reminders that we’re in hell folks.

Gunn: “I’m not going to do it, Angel. There’s a reason it’s all about you. You’re cause and effect all rolled up into one.”

Angel (to himself): “It took the death of my son to get us to this point. I love Connor. I love my friends and I love this city. I’d die a thousand deaths to save any of them but I think I’m only going to have die once.”

There were some nice ads for both Terminator: Salvation and Star Trek comics in this issue.

Illyria: “Do you need transportation? I could strong arm the dragon into doing my bidding.”
Spike: “I think he’ll do it on his own accord.”

Illyria: “Buildings do not just disappear as if they have never existed.”
Spike: “Right because that would be the weirdest thing we’ve seen all month. Or in the last couple of hours or at this very moment.”

There’s a good interview with Brian Lynch on this arc and one with Kelly Armstrong on the upcoming “Aftermath” series.

Connor (to Angel): “Nah, it’s fine. You just moved on up. From urban legend to just plain legend.”

As we edge towards the end of this arc, I find myself a tad exhausted with it. “After The Fall Part 16” was certainly better than the previous two issues but I’m still a touch disappointed. Maybe “Aftermath” will rock, I really hope it does.