My Review of Doctor Who's: "Attack Of The Cybermen" 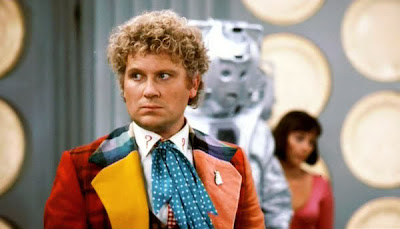 Lytton (re working with Daleks): “That wasn’t out of choice. Your regeneration has made you vindictive, Doctor.”
The Doctor: “Not at all. I’ve never found it difficult to despise people like you.”
Lytton: “I’m not working for the Cybermen. I’m in the same predicament as you.”

I know I really shouldn’t judge prior to seeing but if enough people say that “The Twin Dilemma” was a poor way to debut Colin as the Sixth Doctor, then maybe they are telling the truth. The question now however is whether or not this story is also as disappointing as many people have similarly pointed out.

It’s the opening episode to the show’s 22nd season and it features a familiar foe. I’ve encountered disappointing or slow moving stories involving many of the big Who villains (or downright awful if we have to talk about “Time Flight”), so I can forgive if this is a serial that isn’t up to scratch.

It’s been two seasons since the last time we’ve had Cybermen and even then, they were nothing more than just foot soldiers. Here they seem to have an audacious scheme that apparently The Doctor’s TARDIS can play a vital role in things. Typical Cybermen, always out for something nasty, aren’t they?

Until Lytton and his band of thieves came along, all they seemed to be doing was just killing anyone who entered the sewers. It wasn’t until they took both Lytton and Griffiths on board that we began to learn that they had bigger plots in their midst.

Lytton didn’t exactly waste time in telling them that The Doctor was on Earth and the Cybermen were easily able to get inside the TARDIS and take him, Peri and Russell hostage before killing the latter for trying to protect Peri.

Getting another visit to Telos should evoke some strong memories of “The Tomb Of The Cybermen” but it doesn’t really. There’s something of an information dump though when The Doctor told everyone that Telos wasn’t the Cybermen’s original stomping ground. Lytton also took a fair amount of pleasure in having The Doctor tell everyone about what really happened to Mondas.

Now I do actually like the Cybermen as villains and while I’m realistic enough not to expect every one of their stories to have the same sort of calibre as “Earthshock”, I did wish that this story had been a lot stronger than it was. There aren’t any even decent Cybermen/Doctor scenes so to speak.

In fact, I think aside from the Cybermen calling The Doctor foolish, deceptive and taking pot shots at his emotional responses (such as going back to save Lytton), we are more or less scarce on some genuinely meaty scenes between the pair of them. I think The Doctor might almost be the character to have the least amount of screen time with the Cybermen in this story.

As for Lytton, I didn’t mind him all that much in “Revelation Of The Daleks” but at the same time, I wasn’t entirely begging for a return either. Still the story does sort of serve him reasonably well, even if he spent the first half insulting his crew, offering his services to the Cybermen and questioning The Doctor’s ethics.

It might have helped if the writer had organically shown us that Lytton was actually going to be the good guy in this story. After his antics with the Daleks, it’s pretty hard to believe that Lytton would want to help the Cryons (Telos’s original inhabitants) in stopping the Cybermen from leaving Telos and blowing up the planet.

Lytton did suffer for trying to betray the Cybermen though. The show’s occasional flashes of gore, something which Eric Saward seemed fonder of than other writers and script editors for the series don’t usually bother me but even I found bits of what happened to Lytton a touch excessive.

Still Lytton chose to die rather than let The Doctor save him. The fact that The Doctor and Peri then mused about Lytton during the end scene in the TARDIS ended the story on something of an unusual note. I think if better played out, I would’ve found myself caring more for Lytton and his respective demise.

It would’ve helped if the story had explained why Lytton wanted to help the Cryons cause. Even if the Cybermen did change history and have Earth destroyed instead of Mondas, why would he care? During many of his scenes with Russell, Payne and Griffiths, he showed countless disdain for them and made some anti-human comments to boot.

As for the Cryons, even by 1980’s standards, they do look bloody awful and are badly voiced to boot. Also there’s something rather depressing about the fact that one of them, Flast would happily die if it meant stopping the Cybermen from leaving Telos. Sure, she might not have wanted her planet extinct but she could’ve planned something much better than would’ve ensured the remainder of her species survived.

In the midst of both parts of this story we also had to deal with partially Cybernised duo Stratten and Bates trying to get access to one of the time vessels in order to get off Telos. I should’ve found their bickering amusing but it annoyed me to no end and the fact that both of them got killed along with Griffiths only added to the pointlessness of the entire subplot. Maybe that time could’ve been spent on some decent Doctor/Cybermen scenes but no, not really.

As for The Doctor and Peri, I have to admit the dynamic here is still taking some getting used to. It’s very biting in places and there are times when you wonder why Peri would stick around when The Doctor undermines her intelligence. Still though, I do find that I like both the Sixth Doctor and Peri a little more than I originally did.

It also helped that Peri wasn’t so damsel in distress as well, seeing as that occasionally becomes a default setting with the character. Most of her scenes with the Cryons were naff but I did her moments with Russell, Lytton and she came in handy more than once when The Doctor nearly got shot.

Also in “Attack Of The Cybermen”

Seeing as I was born in 1985, I sort of got a kick in the setting being in the same year as the story aired. I know, kinda dumb but what the hey?

Payne (re Russell): “I don’t think he likes us very much, Mr Lytton.”
Lytton: “If he lets me down, he’ll have very good reason not to. You Payne will kill him.”

Russell was of course played by Davros actor Terry Molloy. I’ve just realised that every actor who has played Davros on this series has played other roles in the Whoverse as well.

The Doctor: “Ungrateful wretch.”
Peri: “What do you expect, applause?”
The Doctor: “A little gratitude wouldn’t irretrievably damage my ego.”
Peri: “Come off it, Doctor. No-one is more surprised than you that we came through it.”

Peri: “Look, Doctor, since you’ve regenerated, it’s like your memory’s been put through the meat grinder. I mean, it’s all there but in a pile of unrelated bits and pieces.”
The Doctor: “That’s a horrible simile.”

According to Peri, The Doctor has called her Tegan, Susan, Jamie, Zoë and Zodin. We also ended up in Totters Lane as well.

The Doctor: “How do I know you won’t change your mind?”
Cyberleader: “You have my word.”
The Doctor: “I’m not sure that’s enough.”

Did Eric Saward really write this story? All of those rumours often suggested that he did and there are some familiar elements to Saward’s type of writing.

The Doctor: “You’re enjoying this.”
Lytton: “It’s not often I have the opportunity to watch a Time Lord squirm.”

It was cool to actually see The Doctor briefly get the chameleon circuit working for the TARDIS, even if it didn’t last.

Cyberleader: “You are foolish, Doctor. Next time we will kill you.”

Flast: “You are a Time Lord?”
The Doctor: “Yes and at the moment, a rather angry one.”

It would be nice if the Time Lords occasionally asked The Doctor for his help instead of twisting events to make him help them.

The Doctor (re Lytton): “Why didn’t he say something?”
Peri: “You never gave him a chance.”

This came out on DVD in March 2009, with a commentary from Colin Baker, Nicola Bryant, Terry Molloy and Sarah Berger. “The Cyber Story” is probably the strongest feature on the DVD.

Although nowhere near a classic for either a Cybermen or a Colin Baker story, there are many other stories that are disappointing in comparison to “Attack Of The Cybermen”. If some of the subplots had been ditched and we got more Doctor/Cybermen scenes, I think this would’ve been much better than it was.