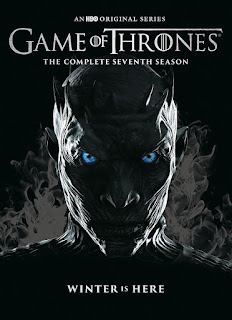 The End Is Near: This has been an interesting year for Game Of Thrones. Onto it's penultimate season and unlike another rival cable series, the show has benefited from the fact that audiences know it's coming to an end fairly soon and that the show has been rightly building towards it.

Last season was the first time the show was flying blind without the original source material as such and this season continues that while at the same time, shortening some of the cast a little too. With seven episodes for this penultimate year, there's time dedicated to giving Arya one last shot at vengeance against the Freys while the Lannisters (with the help of Euron) manage to take out the Sand Snakes, Ellaria and even Olenna as Cersei keeps a grip of the kingdom she killed to stake a claim on in the first.

Perhaps the most satisfying of deaths though would be Littlefinger. A character I've loathed since the first season and one who has survived a little too long for my liking, having Baelish try and pit both Sansa and Arya against one another like he had done in the past with their mother and aunt ultimately proved to be his downfall when Sansa herself showed just how far she's managed to come as a character.

One of the biggest moments of this season was the reunions with the Starks. We saw Sansa and Jon bond most of last season and here, he trusted her to look after their home while he finally met Daenerys but the other reunions were really affecting. Arya's brief encounter with a feral Nymeria was my favourite moment from the season along with her and Sansa and Bran all reuniting within the second half of the season. After everything this particular family had been put through, it was a relief to see Littlefinger fail in his efforts to undermine the Starks once again.

Keeping with families, the Lannisters couldn't be any more fractured than before. The various scenes shared between Cersei, Jaime and Tyrion really did hint at how diminished they are as a unit and even with the former pregnant, there's a feeling that by the time we get into the final season, the Lannisters will be as wiped out as the Tyrells and Martells have been this year.

Then there's the Greyjoys, with Euron trying to fill in the villainous void left by Ramsay. He's not quite as menacing as Ramsay or even as bratty as Joffrey but he's a decent enough antagonist and with his capture of Yara earlier in the season, it took Theon until the end of the season to find himself again and I can't wait to see how he'll deal with his murdering uncle next season.

The big event of the season though had to be Jon and Daenerys finally meeting. It's taken the show quite a while to get there but in the five episodes that they're together, the chemistry between the two of them certainly feels organic, even when Jon's true heritage is actually revealed in more detail between Bran and Sam. That's certainly going to make things a lot more awkward in the last season.

As for the rest of the characters - we did get a little too much time of Sam nearly becoming a maester even if he did get to interact with Jorah and learn more about Jon's real family background. His brother and father were reintroduced, only to be incinerated later in the season but there was also some great character moments from the likes of Brienne, the Hound and Tormund along the way.

The last two episodes of course were the highlight of the season as the White Walkers showed they weren't taking any prisoners given their colossal attack and snaring of one of the dragons while the meetings of Dany and Cersei was another highlight and with that chilling final, we've got one hell of a final battle to look forward to when the show does return for it's last installment.

With seven episodes on display, there are eleven commentaries so not only is every episode represented on that front, but some get more than one commentary to boot. There's features on an anatomy of an episode, deleted scenes and an animated story called Conquest & Rebellion on an extra disc that gives a little more insight into the show's rich history.

Season 7 is currently available on DVD.
Posted by shawnlunn2002 at 4:47 AM