And it's now time for some Liberace (no really) and someone vying for Mayor. I bet you can guess who though. 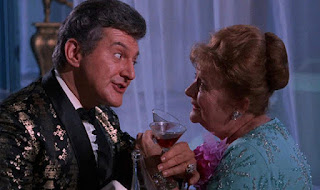 Of all the people to guest star in this show, I have to admit to being genuinely floored with Liberace being brought in as a guest baddie. Even more impressive was the fact that the show decided to give us double the fun with him too. On one hand, we got to see him as concert pianist, Chandell, who had set his sights on Aunt Harriet and not for love while on the other hand, he was also the gangster twin brother, Harry. Both roles are fabulously played, there's a lot of Aunt Harriet for good measure (this two parter is her best in the whole series) and you got that moment where the Dynamic Duo were about to become sheet music as well. Delightful. 9/10 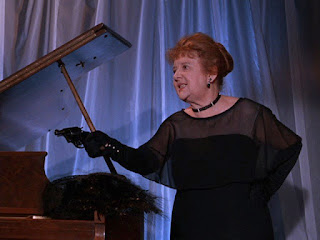 The second part of this story really upped the ante. Having both Bruce and Dick fake their deaths to smoke out both Chandell and Harry's scheming was interesting along with the brothers inevitably betraying each other. However the best moment of this episode was Harriet just showing us all what a total badass she could be when she realised that Harry was posing as Chandell and she pointed a gun at him, quickly realising that he was scheming to marry her to get the Wayne inheritance. Seriously, this was a side to Harriet that the show really should've delved into more often. There is a bit of redemption story for Chandell as he and his brother have gone on a long tour. The fact that this two parter was the highest rated episodes for the series isn't too much of a surprise though. 9/10 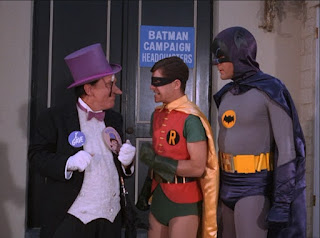 Penguin running for Mayor? Oh, go on, then. This won't be the first time Oswald will go for the job and it won't be the last either. In this episode alone, he does a lot to curry public favour and with Batman lacking the pizzazz in his own attempts to run against Oswald, it's a little easy to see why Oswald was wooing people left, right and centre in this one. I even love the devious bit where some voters decide to put Batman and Robin in a trap and Oswald chooses not to get involved. He really is a politician is that Cobblepot fella. 8/10 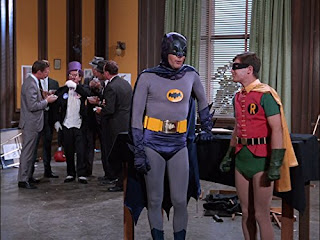 Okay, failed attempts to get rid of the competition to one side, at least the Penguin upped the entertainment stakes when trying to be Mayor, even if he later had to resort to a little kidnapping in order to get a recount that didn't work out for him. Still though, Batman got the job, gave it back to Linseed (who can look forward to getting it snatched away from him in a year's time) and even found himself getting other offers to run for different offices. I think for now, we're probably better for with Batman as a crime fighter than aspiring politician. 8/10

Next blog I'll delve into Green Ice/Deep Freeze and The Impractical Joker/The Joker's Provokers.
Posted by shawnlunn2002 at 5:01 AM