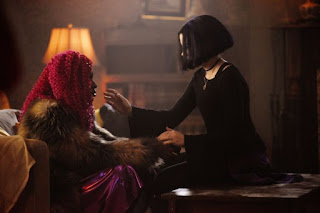 Yeah, and it only took about ten episodes to get there, Trigon. Which begs the question - are they really going to wrap his plans for world destruction in next week's finale or will this plot extend into the show's second season?

For weeks now, the show has kept Seamus Dever's role on the show a secret, so having him pop up as Trigon actually makes some sense now. Of course, due to budget constraints, we've got Trigon in a human form with Angela actively manipulating Rachel into bringing Trigon into our world while Gar's life was in serious jeopardy.

The plus side is that Trigon did actually heal Gar but on the other hand, both him and Angela are waiting for Rachel's heart to break before the shit really hits the fan. In the comics, Angela was more a victim of Trigon's plots than an actual participant in them, so the switch up isn't strictly a bad thing as such. I quite liked the moment where Angela killed well meaning neighbour Tommy in order to show her dark side.

As for Rachel, a part of me wondered why she didn't show a bit more resistance when it was clearly that Angela was using Gar's fate to bring Trigon back or any resistance when her father actually appeared, but again, she is a child and as the episode did remind us quite, she will play a role in Trigon's downfall anyways.

As for Kory - well, she's finally remembered who she was and I'll admit that this should've been done earlier in the season. I did however enjoy her scenes with Dick and Donna in the spaceship as they did some more reading on the chilling prophecy that Kory was sent to Earth to try and stop.

Of course they were too late to stop Trigon but Dick somehow managed to get into the house when Donna and Kory themselves weren't able to. I'm guessing it's because he possesses no abilities otherwise beyond his own human strengths. Going by the trailer for the finale though, Dick is in one for hell of a Knightmare time next week though.

- We briefly saw Hank and Dawn in this episode as scenes from last week's episodes were replayed from Rachel's perspective.
- Angela has been gone from Ohio for twenty years, given her conversation with Tommy out in the yard.
- Looks like this show will be beating Gotham to the punch in showing us Batman in the finale or will they? After all, that trailer does seem to be hinting that what Dick is seeing isn't real.
- Chronology: From where Donna Troy and Hank & Dawn both left off.

Koriand'r gave us answers on Kory and the arrival of Trigon, both of which were done pretty well, but it's hard to deny that both of these things should've been done a little earlier than they were. Still though, we got some great character bits and the finale certainly looks exciting enough, so hopefully whatever happens with this Trigon story next week, it'll be a strong pay off.