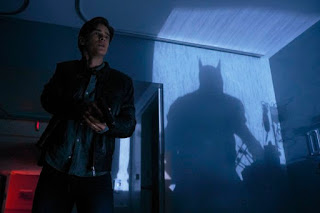 And for those who didn't see that coming - well, how could you not, really? The trailer alone for this finale seemed to make it abundantly clear that something wasn't right with what Dick Grayson was actually seeing and this whole episode played out as a hallucination for Trigon (Seamus Dever) to corrupt Dick into the dark and it has worked for now.

The episode started off idyllic for Dick, who was living in California, retired from crime fighting and married to Dawn with a young son named Johnny and another baby on the way. If that didn't tip people off to this being a fantasy world, then everything else that followed should've done.

As the rest of the episode played out, we got to see both Rachel and Gar having fun in college before a wheelchair bound Jason Todd appeared to tell Dick that Gotham has truly descended into chaos and that Batman (Alain Moussi/Maxim Savaria) has completely lost the plot and has gone around actually killing members of his Rogues Gallery and anyone else who dares to get in his way.

While Batman is mostly restricted to very little dialogue and looking rather obscured during his sporadic moments in the episode, I do find it highly amusing that after the Arrow universe not being allowed to show him on screen last week in their Elseworlds crossover and Gotham holding him off until their last episode in 2019 that this show sort of managed to beat them to the punch.

It's obvious that Trigon used Dick's ongoing fears of turning out to be the worst version of his mentor in order to achieve his goal and given Rachel's reaction to see Dick corrupted by her father, it also looks like Trigon might have succeeded in breaking his daughter's heart to boot. After just introducing the character properly in the previous episode, I am not shocked that Trigon's story will continue into the next season.

Saying that though, it did seem like Dick's fantasy/Knightmare sequence did last a little too long in the episode. What was the moment that made Rachel realise her father was up to no good? Where was Gar during that last sequence and surely we should've seen both Kory and Donna as well, even if the former (as well as Hank) did play some role in Dick's other world. Also we shouldn't be too far off from Hank, Dawn and Jason also coming to help save the day from Trigon and Angela.

- Post credit sequence gave us both Superboy/Connor Kent and Krypto escaping a Cadmus lab in Metropolis. Filming for Season 2 starts in February so we should know casting by then.
- The next DC Universe series will be Doom Patrol, which we can all watch from February 19th. The trailer with the cast and character posters are selling the show for me.
- We briefly saw the Joker, Riddler, Two Face, Scarface/Ventriloquist among Batman's victims and I assume the guy Dick was fighting in an apartment was meant to be Zsasz.
- Chronology: From where Koriand'r essentially left off.

Dick Grayson ended on a cliffhanger and personally, it felt like the first part of a finale rather than an actual finale itself. My guess is that the original season finale has been retooled a little to serve as the opening episode for next season. I can understand people's dissatisfaction with this episode, but personally I enjoyed it.