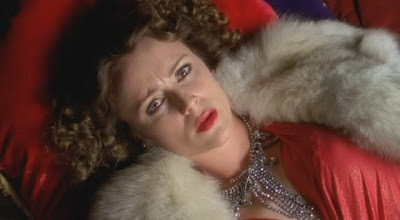 Gene (to Alex): “Blimey. If that skirt was hitched any higher I could see what you had for breakfast.”

Nowadays a successful series can afford to do a spin off. Spooks might have missed the mark a little with Spooks: Code 9 but if Doctor Who can have success with both Torchwood and The Sarah Jane Adventures, then who is to say that Life On Mars can’t with Ashes To Ashes?

Trading 2006 in, it’s the year 2008 and this episode opens up with Alex Drake’s precocious kid Molly thinking Sam Tyler was a nutter. Personally I think police officers should leave files away from prying eyes but perhaps Molly did have a little point given that Sam chose to stay in Gene’s world after fighting so long to get out of it.

However the conversation does steer more towards Molly’s birthday until Alex is dragged into a hostage situation all because a nutter named Arthur Layton specified that she should be there. It hits the right level of intrigue and while Alex is making a decent attempt to reason with Arthur, he’s muttering about knowing her parents.

Making matters worse he also takes Molly hostage at one point and for a brief second, Alex nearly thinks her daughter has been killed. Luckily for her, Molly is fine but sadly the locks in her car aren’t much cop when Arthur is able to sneak in and take her captive a couple of minutes later.

With Sam Tyler he had the annoyance of being hit by a car to send him back in 1973. Alex gets a far more violent method of time travel when Arthur tires of her attempts to reason with him and shoots her in the head. As much I do like Alex, there’s a little part of me that doesn’t entirely resent Arthur for shooting her.

Of course because this is supposed to be an entirely different show, it makes sense for Alex to land in a different time and London 1981 is as good as any. Alex on the other hand mightn’t be as appreciative given that her attire resembles a hooker’s and she’s automatically blamed by the sleazy Edward for a brothel being searched by the police.

It’s quite that immediately Alex’s life is in danger upon her arrival. Okay so Edward is far from the scariest bloke you’ll ever encounter but his attack on Alex is enough to usher in the reintroductions of Gene, Chris and Ray effectively. Alex even sounded like a gushing fan girl when she realised who they were.

Gene and company on the other hand just assumed she was a posh prostitute and failed to listen to her rant about being from another time. Alex doesn’t sound quite as ranting as Sam did at first but she soon catches up to him with the constant chatter of constructs.

More importantly it seems that just like Sam; Alex was assigned to the London station that Gene, Chris and Ray have located to. Gene isn’t exactly displeased when he finds out that she’s his new work colleague but Chris and Ray aren’t exactly jumping for joy over the idea of a female superior. New girl Shaz Granger on the other hand seems cool with Alex’s presence.

Before I go anywhere else in this review, let’s get the replacements out of the way. Apart from Alex obviously replacing Sam, Shaz, Viv and Luigi all seem to be there fill the voids left by Annie, Phyllis and Nelson. So far all the characters work really well, although it’s only Shaz that seems vocalised to begin. That coupled with her attraction to Chris and we could have a new ship to back.

Alex however isn’t particularly interested in her new surroundings and naturally wants to go. She has no problem in trying to undermine Gene but unlike Sam, the worst thing she has to experience from everyone’s favourite dinosaur is an inappropriate grope. To say there’s a bit of sexual chemistry between Keeley Hawes and Philip Glenister is premature but I wouldn’t rule it out either.

Alex’s biggest belief of getting back home is taking Arthur Layton down. The Layton in 2008 bragged about having a huge empire in the day and the Layton in 1981 is seen as little more than a minion. Gene’s entirely convinced of his insignificance despite Alex trying to prove the contrary.

Taking Chris along to investigate his place leads to a good confrontation scene, especially given that when she tried to break what was happening to her earlier on in the episode she ended with the result of being dead. Is Alex actually dead? I mean she did get shot in the head so that really should finish you off compared to a car.

In lieu of creepy Test Card Girls, this series hits a huge success with a Bowie clown from the music video of “Ashes To Ashes”. Using the clown several times throughout the episode, especially during the more subtle moments was chilling but then again, I do have a hatred towards clowns so that’s my thing. It’ll be interesting to see how the clown plays into Alex’s ongoing struggle to get home.

As for the drug plot of the episode, it’s fairly hokum. In retrospect you could see that Edward would hand over his contracts and then try to regain control of the situation by taking Shaz hostage. Even then he came across as being incredibly weedy but it offered a glorious moment for Chris who exacted an appropriate revenge on the nasty banker. Looks like Chris isn’t that cowardly after all.

As for catching Layton, it looks like Alex is going to have to suck it up for a little longer. With a rumour intention of this series going to three seasons, Alex’s mystery I definitely going to be a long one. Like with Sam, her parents are going to factor, only this time I think it’s gonna be a bigger level which could be a lot of fun, provided it’s done carefully.

Dynamic wise, I can see Alex taking on a mentor relationship with Shaz like Sam did with Chris and speaking of the latter, he did look a little intimidated by her. As for Ray, despite his unabashed sexism, he does seem a little less hostile towards Alex than he did with Sam and with Gene, there’s the love/hate dynamic.

Just like with Life On Mars, this series didn’t open with any credits. I don’t know why some shows do that.

Gene (to Edward, re Alex): “Today my friend, your diary entry will read: took a prossie hostage and got shot by three armed bastards.”

Is it strange that as soon as Alex went into 1981 it was the song “Vienna” and not “Ashes To Ashes” that ushered her in?

Alex: “I can hear the wind in the trees.”
Gene: “Strewth, she’s gonna break into song.”

Gene: “What were you doing in that brothel – undercover or moonlighting?”
Alex: “Let’s assume the former, shall we?”

Alex tried to get the TV to talk to her during the episode. It did towards the end when the Bowie clown addressed her as Molly.

Alex (to Chris): “I’d like to get out of red before Chris De Burgh writes a song about me.”

In terms of looks, can I just say that Keeley Hawes rocked the more androgynous look that Alex had for a good chunk of the episode?

Gene (re Alex’s psychology): “Where did you learn this hippy shit?”
Alex: “Langley.”
Chris: “Near Macclesfield?”

Getting back to the possible Gene/Alex chemistry angle, even Ray picked up a vibe between the two of them.

Ray (to Alex): “If you’re smart, you’ll know that being with the Guv is the right place to be.”

Ray told Annie that Sam died in an accident a year ago, presumably before they all transferred to London. Unless we see an actual body, I live in Sam is alive and in hiding with Annie for some reason.

Gene: “Luigi, get yourself a drink.”
Luigi: “No, Senior Hunt. I go upstairs to my room and shoot myself.”
Gene: “Good man.”

Alex: “I want to go home.”
Gene: “Yeah, well your presence is required for a little bit longer by me.”

Chronology: July 1981, which according to Alex is around the same time her parents were murdered.

Unlike Life On Mars, it’s a shame that Ashes To Ashes hasn’t garnered as much critical acclaim, despite the brilliant ratings it delivers. As an opening episode, everything is set up beautifully with Alex’s situation is both similar and incredibly different to Sam’s. I can’t wait to see how this unravels.