My Review of Being Human's 1x06: "Bad Moon Rising" 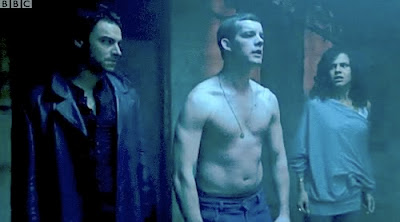 Big battles and matters of faith aside, did anyone really think that Mitchell would die and Annie would cross over? Not even a little bit? Then congratulate yourself because in less than five minutes, Annie ditched her flight and Mitchell wasn’t about to join Seth and Lauren anytime soon. Yay on both counts.

This episode of course opened up with the very moment two years ago in which George and Mitchell met. Unfortunately the flashback also included Seth as the sullen vampire and two of his mates made it their business to attack George.

Had Mitchell not have intervened way back when, then it’s easy to presume that George would’ve been a dead man. Watching that attack was unpleasant given how much the media are now discussing knife culture and other senseless killings in Britain nowadays.

Mitchell’s rescue of George wasn’t something that I would deem heroic of sorts. There was no epic fight to the death, it wasn’t really a moment where Seth realised that Mitchell was a good guy but it was important. Mitchell used simple logic to get Seth and his friends to leave George alone. Then he told George to leave without explaining why werewolves are loathed by vampires.

In the present day, the notion of fleeing is also present. Mitchell’s funky physiology was enough to baffle doctors and the lack of straight answers from George made Nina question their relationship as well. Getting Mitchell out of the hospital made sense but it was only Josie sacrificing herself that made Mitchell strong enough to be discharged.

I liked that we got Josie back in the finale and I even understood why Mitchell would drink from her. Josie wanted to die and she also wanted Mitchell strong enough to stop Herrick from plaguing the world. However because of her act, Mitchell has yet another person on his conscience and that’s not good if he wants to retain his humanity.

Surprisingly enough however is that the majority of confrontation that are with Herrick are ones with George. George became very protective of Mitchell and even got into a physical scrap with Herrick. Herrick continued to justify his plans as a step in evolution but anyone with half a brain could see that he was on the verge of wiping out the human race.

However for all of his smart arsed comments to George, there was no denying that Herrick posed a very potent threat to them all. He made no bones of telling George that he would kill him and Mitchell had to point out to Annie that Herrick could even hurt her by simply killing him and George.

Some viewers wondered if Annie’s presence had something to do with her attachment to Mitchell and George. This episode confirmed that. Annie herself was very territorial with the boys, first wanting to protect them and even considering fleeing as well. When George told her that he had to consider his own future, you could see that it broke Annie’s heart.

Herrick also had some brilliant moments with both Mitchell and George as the episode progressed. Mitchell’s rejection definitely left a taste given how determined Herrick has become in wanting him dead and even George couldn’t dissuade him into leaving them alone.

It’s actually a pity that we didn’t get early interaction scenes with George and Herrick earlier on in the season because both actors plays so well off each other that Mitchell almost becomes something that needs to be protected. Even the big fight doesn’t involve Mitchell.

No, instead we got George and Herrick locked in the same room prepared to do damage to each other. It’s interesting that when Herrick warns George that he’ll lose the remainder of his humanity by becoming a murderer that George didn’t start feeling guilty about it. Herrick needed to be stopped and George was the only one strong enough to do it.

I don’t think murdering Herrick should compromise George’s moral compass. If Herrick survived, then George and company would be picked off one by one but Herrick was able to point out that their attempts of trying to pass off as being human wasn’t that successful.

Then there’s the fact that Nina has now become aware of George being a werewolf. The scene where a wolfed out George recognised her was certainly telling. Has George made her into a werewolf by scratching her? If so, then he definitely will feel guilty about that.

Annie herself also had some moments to genuinely shine. Meeting up with one of the victims from last week’s episode gave her esteem enough of a boost to raid the funeral parlour and rescue the rest of the victims. It was also her conversation with Herrick’s crazed girlfriend that alerted her about George’s plot.

So with all these new skills of Annie, will we get to see her kicking more monster butt in the next season? She’s certainly more of a threat to evil doers than Mitchell and George are physically and she’s not even corporeal to put it mildly.

Of course another interesting aspect of the finale was Owen. I wasn’t expecting him to appear in this episode but it was nice to see that justice prevailed and he was in an asylum of sorts. However as soon as he started talking to that doctor, I had a feeling of what was going to happen next.

Our medic friends seemed to be more than interested in existence of ghosts, werewolves and vampires and that can’t be good. It does however make sense and not just because Herrick made a point of mentioning that others would come after the gang. Besides, normality is never going to be a complete option for Annie, Mitchell, George and now Nina.

I noticed during the run up to this episode that the BBC3 website conducted interviews with the cast members.

Both Toby Whithouse and Colin Teague previously worked together on the Torchwood episode “Greeks Bearing Gifts”.

Mark: “Jewish people pray, I’ve seen Yentl.”
George: “You’re very sarcastic for a vicar.”
Mark: “Yeah, so people tell me and I feel really bad about it and then I forgive myself.”

Did anyone catch the name of the canteen lady that Herrick turned? I’m not really sure why she spoke so inanely though.

Nina: “I need something normal now. Something kind.”
George: “You need me to choose between you and him.”

Mitchell (re Herrick): “If I beat him, if this works, this whole thing will fall apart.”
Annie: “But you won’t beat him, will you?”

Was it me or did Annie wear her top backwards when she broke into the funeral parlour?

George: “I won’t live forever. I don’t have time like you do.”
Annie (re Mitchell): “He doesn’t have time. Two days ago, you made me rescue Mitchell from Herrick. You said that if I didn’t do, I’d finally died.”

George: “Someone actually recruited an old woman?”
Herrick: “Well, you know what it’s like. You’re out and about, you get the munchies, you’ll eat anything.”

I’m surprised that at one point, Nana didn’t actually try to attack George, though she did look at him with disdain.

George: “There will come a time when you understand why I’m doing this.”
Annie: “Don’t worry, I get it.”

I forgot to mention in my last review that Herrick’s first name is William. He also spoke of Mitchell being more merciless than he lets on.

With Mitchell joking about action figures, it’ll be amazing to see how long before ones actually surface from the characters in this series.

Herrick (to Mitchell/George/Annie): “So a werewolf, a ghost and a vampire decide to live like humans do. They get jobs, a house and a TV licence. They make friends they lie to, take lover they will infect. In fact, the only part of humanity they successfully adopt is it’s ability to deceive and destroy. All in all, I’d say your little scheme has been something of a failure.”

Herrick: “I realise now that was my role. If I’m going to hell, then I’m taking you with me.”
George: “Haven’t you worked it out yet? Humanity is about love and sacrifice. This doesn’t rob me of my humanity, it proves it.”

Standout music: Good selection here with Duffy’s “Mercy”, Bloc Party’s “Where Is Home” and Johnny Cash’s “When The Man Comes Around”.

Annie (re George): “Maybe he’s fine with it.”
Mitchell: “He killed someone.”
Annie: “Does Herrick count as someone?”

Chronology: Exactly where the previous episode left off.

For a first season with such a high standard of writing, the finale was brilliant. I know we’ve had better episode in the series but this was certainly a good way to end things while neatly setting up events for the next season. Here’s to 2010.