My Review of Halloween 5: The Revenge Of Michael Myers (1989) 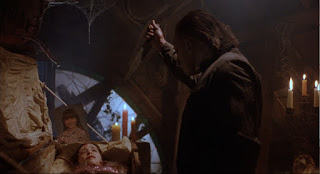 Loomis: "Michael, it will destroy you, too. One day, Michael, this rage which drives you... You think if you kill them all it will go away. It won't. You have to fight it in the place where it's strongest. Where it all began! If you want to get rid of this rage, Michael, go home. Go home! Go to your house, I shall be there waiting for you. You'll find her waiting for you."

With Halloween 4: The Return Of Michael Myers giving the franchise the shot in the arm it needed, you can see why the writers might have felt like they were riding the wave of invigorating the franchise but with this movie, the spiral downwards started to form and with arguably worse movies on the horizon, there's still no denying this is where things were beginning to go south.

Somewhat retconning the ending of the previous movie, it seems that Jamie Lloyd (Danielle Harris) didn't kill her adoptive mother in the first place but that the latter survived and was largely offscreen while the former was now a mute in a hospital being screamed at by Dr Loomis (Donald Pleasence) while also having a psychic connection with her murderous uncle (Don Shanks), who has spent the last year recuperating before resuming his murderous spree.

Of all the movies to feature Loomis, this one is by far the worst of the bunch with his incessant berating and recklessness regarding Michael Myers ramped up to several annoying notches as he endangers more people than he actually saves this time, as well as including a brazen desire to actually use Jamie as bait in order to stop (well, fail to) Michael once and for all by bringing everything back to the Myers house for another bloody showdown between uncle and niece.

It's a shame that this movie seemingly abandoned the idea of a darker Jamie Lloyd but the character is still sympathetic enough in her second outing with Harris putting in another solid performance. Another big shame is the quick disposal of big sister, Rachel (Ellie Cornell), who I definitely liked in the previous movie.

It's a shame because we're left with Rachel's best friend, Tina (Wendy Kaplan), who is one of the worst and poorly acted final girls we've seen in this franchise and is ultimately pretty useless and insipid to watch along with her just as vacuous and easily dispatched of friends/boyfriend to boot. I'm not even going to bother with their names because they're genuinely that unengaging as characters to watch.

This movie frustratingly doesn't know how to utilise it's mostly new cast. A little boy named Billy (Jeffrey Landman) is randomly forgotten about at one point and then there's Michael himself. After three previous appearances of being a homicidal maniac, this movie sets him up with a mystery tattoo that is then weirdly explored in the next movie but other than that, he feels like he's on autopilot at times. There's a nice moment where it seems like Jamie gets through to him and the final shot is suitably bleak but other than that, it's not his most memorable of movies.

- This was the last sequel movie to feature the exact numbering, a pumpkin in the opening credits and was overall the lowest grossing movie of the franchise.
- Don Shanks had to have a new mask made for him for this movie as the one from the previous movie didn't fit.
- The original script was going to have Jamie as a dual antagonist and I would've loved to have seen that.
- Chronology: Exactly a year after the events of the previous movie.

Halloween 5: The Revenge Of Michael Myers is largely a mess of a movie that squanders the reboot that the fourth movie had previous given fans of the franchise. The new cast are either dreadful or wasted, Loomis is annoying as fuck, Jamie while engaging might have been more fun as a baddie and Myers is on autopilot. Saying that, it's still better than at least three other future movies, on a par with the next movie and somewhat behind on the one after that. Frustrating though.