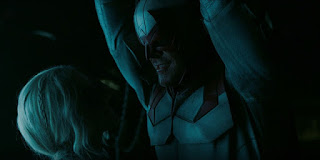 Dawn (to Dick): "You weren't kidding about having changed. I've never seen you like that before."

Without sounding like a prude, but two episodes in and this show has a serious problem with it's violence. I thought it may be was the first episode trying to show off a little by making sure people didn't confuse it for a certain cartoon but with the absences of two members this week and the introduction of two others, this one went overboard.

First of all - Hank Hall has a potty mouth on him so big that he'd fill several swear jars in one night. I get from the character descriptions that Alan Ritchson is playing the guy otherwise known as Hawk as a bit of a brawler but surely a little bit of charm wouldn't go a miss either. Costume wise, Hawk looks great. As a hero, he's absolutely terrible.

In this episode alone, he gets the crap kicked out of him, he's strung up, shot at, choked, knocked out and nearly castrated twice in the episode before he's rescued by his more sympathetic significant other Dawn Grainger/Dove (Minka Kelly) and Robin towards the end of this episode before things go to shit yet again for everyone else involved.

I could've done without the love triangle between Dick, Dawn and Hank in this episode and the macho posturing of both male characters but I will admit that at least Dawn was the better developed and engaging of the duo, so I'm hoping that this episode didn't needlessly kill her off for no good reason as Rachel got captured yet again. I swear if that keeps happening, it's going to get tedious pretty fast.

Speaking of Rachel - she worked well with Dick, Dawn and Hank and the exploration into her powers is interesting enough as she's struggling to come to grips with them. Saying that though, it would've been nice had her powers come into actual use when that creepy family of cult members/assassins kidnapped her at the end of this episode.

I do wonder if every week it's going to be some other weirdo/es coming after Rachel while at the same time we're drip fed hints as to how Dick has changed and what exactly fractured his relationship with Bruce. There was a nice shout out to Alfred in this episode, which sadly didn't lead to an actual episode appearance but I'll take what I can get there.

- Aside from Dawn, I do hope that bunch of weirdos also didn't kill off Amy this week. The morgue guy Charlie was pretty amusing. I hope we see him again.
- There was a picture of Dick, Hank and Dawn with Donna Troy. We'll be meeting the latter in a later episode this season. I also found Rachel watching Game Of Thrones pretty funny.
- No Beast Boy or Starfire in this episode, which somewhat surprised me.
- Chronology: From where the opening episode left off. Hank and Dawn have also been together for at least four years, possibly longer.

Hawk & Dove went overboard on the violence and swearing (I did not need to see Robin gouge someone's eye out) and it's title guest characters certainly need work, especially if there are plans to give them a spin-off in the near future. In general though, the show needs to lighten itself up by a lot as it's not pulling off the grittiness it thinks it can do.