My Review of Legends Of Tomorrow's 4x02: "Witch Hunt" 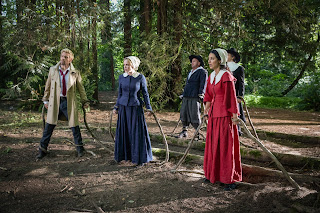 Fairy Godmother: "I know you're on the run and I know who's coming for you and believe me, I'd rather face hell than piss him off."
Constantine: "Well, I am happy to oblige."

Last week we got unicorns and almost as though the CW knew this would be airing in the week of Halloween, we get the merging of a malicious fairy godmother and some Witch Trials in Salem to boot. It's a foolproof winning combination and it's one that's exploited to perfection here.

The serious stuff first - poor Jane Hawthorne came close to losing her life after being falsely accused of witchcraft that her distressed daughter Prudence relied on the main threat of the week to try and help her mother before the Legends tried to save the day, only for the hitch being that technically Jane's death was supposed to be set in stone.

Not that this stopped Zari from trying to change history. This isn't the first time Zari has done this but the episode once again demonstrated how brilliant Tala Ashe has been for the series as Zari tried to save Jane and almost ended up being killed herself before Prudence realised that she couldn't rely on a Fairy Godmother to save the day. Last week we got a lovely scene with Zari and Ray which gave more insight into the former. This week, it was her and Sara who got to share a lovely moment this episode.

As for the Fairy Godmother herself - Disney hell, anyone? Jane Carr was absolutely fabulous in this guest role, being all whimsical and sing song one minute and then the next, having John Constantine gagged and Ray and Mick changed into pigs. Fairy Godmother's animosity with Constantine was pretty amusing to watch and I found it interesting that being sent to hell was more appealing than pissing off the fellow that's after John Constantine.

Speaking of Constantine, I've noticed that not everyone has been happy to see him in an expanded role. Some fans fear that he's at risk of overpowering the main characters while in the show, Mick couldn't make his hatred of John more obvious. To be fair, much as I love the bisexual exorcist, I can see why Mick might not be so keen on him. Eventually they might get along with each other. On the other hand, maybe not.

As for Nate - he was largely separated from the main event this week, with the writers opting to focus on Nate's relationship with his father and effectively leaving the Waverider for the Time Bureau. It might be odd not having Nate on the ship for the time being but his scenes with Ava, Gary and Hank this week were fantastic, along with his ability to easily spot Ray and Mick in their pig forms. Ray also seemed a little disappointed that his friend was staying with the Time Bureau as well, which was a nice character bit.

- When he's not carrying feet around him, Constantine also has a spell book made of human skin. I don't think "yuck" covers it really but it's close enough though.
- Was there a reason why Zari chose to wear red when they were undercover in Salem? I think this was also the first episode where Sara and Ava didn't share a scene together.
- Nice little cameo of Beebo there when Prudence saw him on a tablet.
- Chronology: 1692 Salem for most of this episode. 2018 with the Time Bureau stuff.

Witch Hunt was magical, whimsical, lyrical and a little bit menacing to boot. A part of me is hoping that Fairy Godmother breaks out of hell to cause more trouble for the gang later in the series while at the same time, I am curious to learn who exactly is after Constantine now. Someone from his own canon undoubtedly, but who though?