It's time for a crossover as our Dynamic Duo meet another team of crime fighters while a certain Pharaoh makes another appearance. 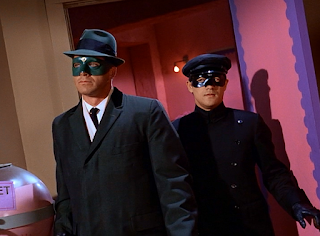 Despite an earlier episode actually featuring them on television, it seems that the Green Hornet and his trusted companion, Kato exist in the Dozier Batman universe as well. Van Williams and Bruce Lee take their characters to Gotham City for this two parter and there's an implied rivalry between Bruce Wayne and Britt Reid as well as a rivalry between the Dynamic Duo and Green Hornet/Kato. There's also a rather pink wearing villain in Colonel Gumm (Roger C. Carmel), who has something of a thing for alphabet soup and stamp - the latter being the cliffhanger as one duo gets turned into giant stamps while the second group await the same fate. 8/10 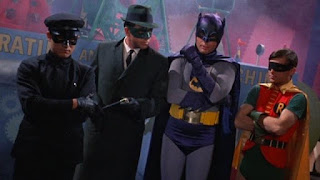 A strong second part to this story. I did like seeing both groups working together in order to take down Colonel Gumm's plot while his former female assistant Pinky and her also pink dog Apricot when they weren't taken being held captive by Gumm seriously, also seemed to be of the belief that Bruce was the Green Hornet and Britt was Batman, much to the amusement of Gordon and O'Hara. For a team up episode this was a lot of fun and while it's nice that another one happened in the Batman 66 comics, it's a pity it didn't happen here again. 8/10 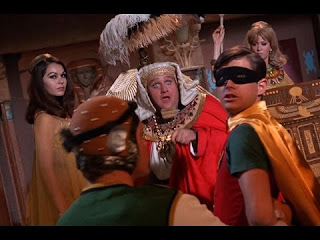 Ah good, another appearance for King Tut. He started off again as his mild manner professor with two new college jocks wanting to take his class before resuming his King Tut persona and crashing a fabulous party in order to kidnap socialite, Lisa (Lee Meriwether) whom he believes is a reincarnated version of Cleopatra. Needless to say, things don't end well for the Dynamic Duo as Batman finds himself entombed and Robin is powerless to stop himself when Tut isn't calling him a tattle tale, which as a line cracked me up. 8/10 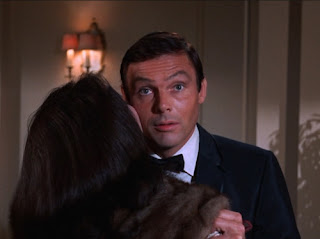 Concluding this two parter, Batman managed to get out of his predicament but Robin spent a good deal being captive along with Lisa while both the Caped Crusader and King Tut had an amusing exchange of words courtesy of radio host Jolly Jackson while Lisa's father attempted to come up with a ransom for his daughter. Let's just Tut has something of a potty mouth when provoked while a lady in waiting did her best to save both the Boy Wonder and 'Cleopatra' before Tut's usual downfall came into play. As for Bruce and Lisa - well, we know Adam West and Lee Meriweather have chesmitry as Batman and Catwoman and here, they did as well when Bruce accepted Lisa's invitation for milk and cookies after ten o'clock. Bruce, you cad. 9/10