My Review of Legends Of Tomorrow's 4x06: "Tender Is The Nate" 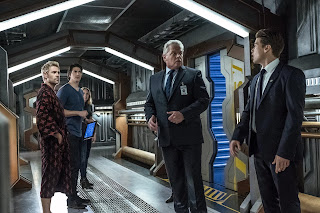 Nate (to Sara): "Coming back here, I thought it would be like the old days but I don't know what's so surprising, the fact that so much has changed or at some point, this became the old days?"

Going by this exchange, I'm beginning to wonder if this show is setting up a potential departure from Nate altogether. It definitely feels like his days on the Waverider are over and done with and while it did take a while to warm to his character, there's no denying that he got a lot better as the series progressed with him.

If this episode was a finale for him as such, then it certainly ended things on a fine note for Nate. He got one more mission with his former crew and even further cemented his father's approval during a trip to the roaring 1920's that involved Ernest Hemingway and a Minotaur because this show and it's merging of very different things results in a winning format.

It was fun watching Hank going from wanting to slash the Waverider's budget (they really do spend a lot on period clothing) to find himself in full fanboy mode when he encountered Hemingway, much to Nate's own disdain for the writer himself.

The 1920's setting was a lot of fun and wonderfully utilised as Constantine and Nate tried to calm the Minotaur down, only for Hank's vocal chords to be the thing to save the day while Nate also discovered Charlie on board the Waverider, realised quickly why she looked like Amaya, struggled with it before eventually telling her that she'll find her place on the team. Any other show would've over egged that particular plot but here, it was handled head on and I do think Nate's words clearly meant a lot to Charlie, who to me fits in pretty well with this band of misfits as it is.

Speaking of fitting in, I wasn't particularly sure about Mona's purpose for the show with her first two appearances but this episode really slotted her in effortlessly. Putting her in a cell with both Nora and Ava was a genius move and the conversations between all three of them was a lot of fun to watch. While I do think Mona's bouncy personality might be a little much, I did like her shipping of Nora and Ray though - the latter who decided to visit through an envelope of course.

As for Ava, I'm loving the continuity of her being a clone and how not having an actual childhood/real parents has effected her. It was nice to see her opening scene with Sara before Hank interrupted it while also seeing her connect with Mona and Nora as well. Something tells me though that Nora won't be stuck in that cell for much longer though.

- Gotta laugh at Gideon pointedly mentioning that she was also a member of the team. Aren't we due another physical appearance from Amy Louise Pemberton at this point?
- Sara in suspenders as a birthday present for Ava and Constantine doing naked yoga. This show really does know it's fan base, don't they? Constantine can also do a better US accent than Charlie it seems.
- Standout music: Gotta be Hank singing Sweet Baby James to a Minotaur, doesn't it?
- Chronology: 2018 at the Time Bureau and 1927 Paris for the mission.

Tender Is The Nate certainly felt like an ending of sorts for Nate as a character, at least from the Waverider, if not the show itself. The 1920's setting was a lot of fun and the Nora, Ava and Mona cell scenes were another highlight to boot.