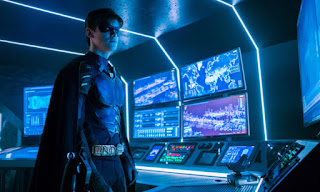 Kory (to Dick, re Robin): "You gonna wait til the bitter end?"

Well, this felt like an ending of sorts. Let's see - Rachel reunited with her mother, Adamson and his main cohorts were basically incinerated and we got to see Dick somberly watch his Robin go up in flames. And yet, there are five episodes left to go this season.

I guess it's an interesting way to go with the show and it should certainly make the remaining episodes a bit more interesting to watch as well. With Rachel reunited with one parent, it can't be any further away from her reuniting with the other. Adamson might have failed to have gotten Rachel to summon her father and not lived to tell the tale but it doesn't mean that Trigon won't be a future problem for her and the rest of the Titans.

Gar so far has been the more lighter of the four main Titans and even here we got to see him caged up and tortured that later in the episode he resorted to killing another Doctor in order to protect Rachel and Angela and was somewhat horrified by his actions. Poor Gar, those scenes were brutal to watch and this episode had it's fair share of brutal scenes.

For example, we saw Dick strapped down and drugged up to the eyeballs where he spent a great deal of his time beating himself up. No, really, it might have been the most cliched thing they could've done with Dick's subconscious but it did make some sense to see him project his anger onto himself before Rachel was able to snap him out of it.

As for Kory, we also had her strapped down and on the verge of being gruesomely experimented on before the rest of the gang stepped into her rescue. I was pretty glad that we didn't have to witness the extent of that scene and having Kory incinerate the asylum was probably the best thing that could've been done.

- Kory seems to be sticking with the shiny purple pants suit now for the second half of the season while Dick now seems to be down a costume.
- I do find the Batcave in this show quite strange looking, but I did like this episode giving us a better look at it this week.
- Next episode will give us Donna Troy, though we did see a photo of her earlier in the season.
- Chronology: Not long from where Jason Todd left off.

Asylum wasn't as great as the last few episodes but at least it pushed things forward - Rachel and her mother are reunited, the main baddies after her seem to be out of the picture for now and Dick has shed one identity, so I can't wait to see him step into the other one in the remaining episodes of the season.