The final few episodes of this series sees the returns of several baddies and a moment where Terry seriously put his identity at great risk. 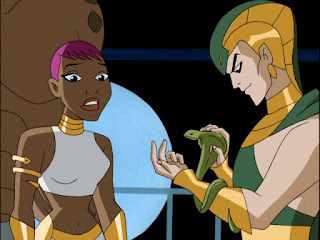 One more two parter before the series and it's better than expected. While the previous one with the Justice League was a bit one, this feel a little smaller by comparison at first. Terry gets some training by Kairi Tanaga, going on Bruce's advice and befriends the somewhat strange Zander who is then beaten by Max at a video game. It seems that Zander has been position as the new leader of the Kobra and Max is going to become a reptilian bride whether she likes it or not. Zander is a pretty engaging guest villain and I quite liked Kairi as a character too. The ending is pretty bittersweet for this one. There's also a brief Jokerz appearance in this one. 8/10 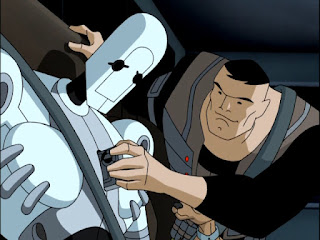 The returns are still strong in these episodes. This time around you've got Mad Stan getting some more extended screen time as he decides to add vigilante to his resume of things he's somewhat done on the series. To his credit, he did manage to rescue Zeta from a couple of bloke and there was some nice moments with Terry and Ro and Stan's little dog was adorable too. Unfortunately we did have Zeta being used as a time bomb but fortunately that one resolved itself though. Despite being the penultimate episode, this was actually made before the finale and this was also a crossover episode with The Zeta Project. Speaking of. 7/10 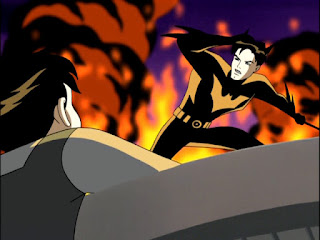 Now this was a bit of an anti climatic finale. I don't know if this was truly intended to be a final episode and while it's engaging, it just feels too low key to be a series ender though. Once again, the Kobra gang (I swear they have a new leader every story they're in) learn that a little boy knows who Batman is so they get agents to pose as the police to snatch the kid and identify Batman. While Terry was reckless in revealing his identity to the kid in general, it does seem for the time being that his secret is safe while the Kobra gang got their backsides handed to them once again. I liked the last scene and overall the episode is good but could've been a bit stronger though. 7/10

Next time it'll be The Batman. I've enjoyed reviewing this series a lot.