My Review of Gotham's 3x22: "Heavydirtysoul" 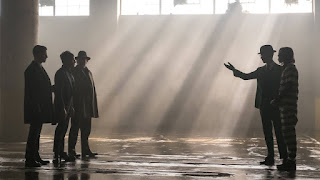 Selina (to Tabitha): "I'm tired of surviving. I want more."

Going by the looks of it, does anyone get the sense that next season could possibly be the last season of Gotham? Unlike last year where it's renewal seems a certainty, there was an element of apprehension as to whether or not it would go into a fourth season and now we have it on the horizon, could it be that the writers are also preparing for the worst/best too?

In this episode alone, a lot of dynamics shifted here. Selina might have been relegated to two scenes, one where Bruce rejected her and another where Tabitha took her under her wing but Selina said it herself - she wants more. In one moment we saw take a hold of Tabitha's whip and whirl it like it came naturally, pushing her that one step closer to her future self.

Similarly Bruce was pushed into his future self in a bigger way than before. Stabbing Alfred snapped him out of his conditioning and while he rejected Ras Al Ghul this time around, the latter was also quick to point out that they would cross paths again. Here though, Bruce was focused on saving Alfred's life (which he did with some of the Lazarus water and medical staff) while at the same time, also trying to figure out who he really is.

That clearly came to him at the very end when Bruce went into Year One mode by donning a disguise and subverting the very event that has defined him with another family walking down an ally at night. I honestly thought we wouldn't see a moment like that until the show's actual series finale, so I'm intrigued to see how this vigilante role is going to play out next season considering that Bruce is still just a teenager. Then again, it could also be his clone, seeing as that plot thread is still dangling.

As for the rest of the episode, Gordon's savagery came in handy when he extracted a lot of Tetch's blood in order to get a cure. The city became cured as did Leslie herself, who still kept her promise and left Gotham but the virus infection itself fell into the background with even Tetch himself being relegated to little more than leverage between various characters as a contrast to the Big Bad he had been at the start of the season.

The various characters themselves were Oswald, Nygma, Barbara, Tabitha and Butch, all of whom were trying to one up the other with some delightful results. I loved that Oswald allowed Nygma to think he had the upper hand, only for Freeze and Ivy to show up and Eddie himself to become an ice sculpture as a result while the Babs/Tabs/Butch triangle came to a rather messy ending too.

I have to admit that I was wondering whether or not Barbara would realise she was a dead woman walking before her confrontation with Butch left the latter with a bullet in the head and in a coma. The face off with Barbara and Tabitha though was better with the latter putting her whipping skills to the best use they've ever had on the show. With Butch now protected by plot armour (more on that in a bit), are Barbara and Fish the only casualties from this finale? I guess we'll know next season.

- Butch's real name is Cyrus Gold, so it seems we've gotten Solomon Grundy on the show all this time. There were rumours of Harley Quinn appearing in this finale but that didn't happen. I'm betting we'll see some variation of her next season though.
- I'm assuming Barnes was cured off screen. The second part also seemed short on Hugo Strange and Firefly as well.
- The episode's title is named after the Twenty One Pilots song of the same name, but I don't remember it actually being played in the episode.
- Chronology: From where Destiny Calling left off.

Heavydirtysoul was definitely a strong conclusion to mostly a great season of the show. We certainly had a lot of characters, potential departures, new alliances, secret identities revealed and basically more than enough to drive the next season.