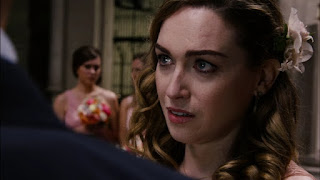 Okay, I really didn't see that coming either. With all the other stuff going on in this episode, I wasn't expecting Will's father to show up and die at the very end. I'm not gonna lie - he's not a character I greatly cared about in the first season even if later episodes tried to make him more sympathetic but the impact of his death was certainly felt here though.

Of course it was Riley who had to see Will's father die along with Will also witnessing it but along with some poignant flashbacks, the last scene really did pack an emotional punch. Just when you think you can predict what the show will do next, it surprises once again.

Keeping with the family theme, Nomi, Amanita and Bug attended the former's sister's rehearsal dinner and then wedding, both filled with discussion worthy moments. Nomi did slightly make her wedding speech to Tegan a little about herself but it was a nice way of also showing much support Tegan has been to Nomi and when Agent Bendix disrupted Tegan and Tom's wedding, we got a nice moment where her father stepped in as well.

However while two thirds of Nomi's family have been supportive towards her, Janet on the other hand still remains quite horrible. On both occasions she was a bitch to Nomi but hopefully with the way things escalated in this one, her treatment of Nomi will no longer be tolerated in future episodes.

Meanwhile Lito managed to snap out of his funk when Daniela found him the perfect part to play. The best part however was seeing Daniela in full agent mode, blagging Lito an audition for the part and the bemusement of both Lito and Hernando while she worked her magic. With the three of them heading to the US, it can't be long before Lito and Nomi actually meet face to face, right?

As for Capheus, his political storyline intensified a little as he fled from would be kidnappers/killers while learning that the man who wants to help him is also in love with his mother. Compared to the other strands this episode, it's probably the weaker one of the bunch and I kind of miss seeing Zakia as well, who seems to have disappeared.

- Kala got left a suspicious looking from Ajay while Rajan was away this episode. I did like Kala's scenes with her mother in this one.
- Wolfgang has decided to finally get out of Berlin while Sun helped Nomi deal with Tom's asshole of a best man.
- Will was seen by his father at the end. That could raise some questions but it could also be just have been a signal that he was dying too.
- Chronology: A couple of days since the events of All I Want Right Now Is One More Bullet. Lila was nowhere to be seen here either, though we had some Whispers/Angelica flashbacks and learned Riley's BPO contact was called Carol Cumberland, who's dead now.

What Family Actually Means had some nice moments on the topic and while very little was actually advanced with the ongoing BPO plot or much sensate interactions, this was still an incredibly enjoyable episode.