A great selection of episodes as the Joker impersonates royalty and one of my favourite original baddies makes their debut as well. 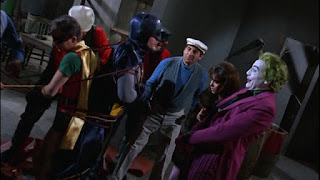 A few senseless crimes here and there is nothing too new for the Joker but this time around, it seems that he wanted to go a little bigger with his escapades and befuddle the Dynamic Duo. We had him shrinking vans seemingly only then to snatch the Maharajah of Nimpah as well for good measure. This one ends on a pretty good cliffhanger when the Joker's latest accomplice tries to appeal to the Clown Prince to spare Batman and Robin, only for the latter to put them in a gas chamber. 7/10 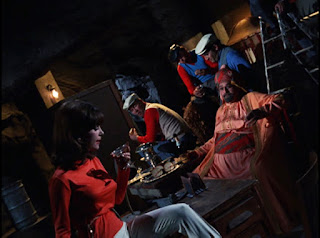 I liked the way both Batman and Robin got out of this particular bind but the highlight of this episode was of course, the Joker trying to pass himself off as the Maharajah of Nimpah in order to swindle money out of the Gotham City State Bank in order to discredit Batman before the latter and Robin were able to work out what the Joker was planning all along. It's not a classic two parter for the Clown Prince but it's a lot of fun nonetheless. 7/10 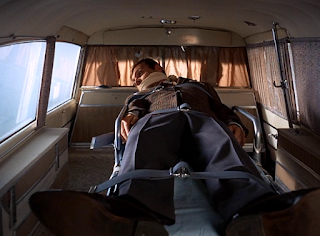 As much as I love this show's take on our classic villains, it also truly excelled itself with it's own creations and none better was timid professor, William Omaha McElroy turned criminal King Tut - having suffered a blow to the head and convinced that he's now the former Egyptian Pharaoh. In this first part, Tut has his acolytes making doom laden announcements in the park while also successfully managing to kidnap Bruce Wayne, who ends the episode bound and gagged to a gurney and doomed to go over a cliff. 8/10 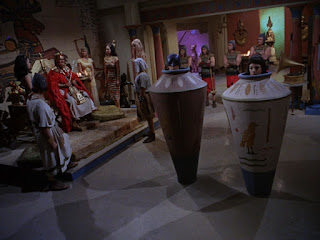 The second part of this excellent story maintains the quality of the first part as Bruce saves himself but Tut doesn't hold off in arranging to have the billionaire playboy kidnapped again. Only this time, it's Batman who ends up being captive to Tut along with a fallen Nefertiti. Both of them are put through the Pebble Torture resulting in Batman having to do the Bat Dance while Tut himself is eventually reverted back to his original personality. It's easy to see why this character would later to go on to influence the similarly themed Maxie Zeus for the comics but this show got there first and while I like Zeus, Tut is just that bit more interesting, especially when you take Victor Buono's larger than life performance into account. 8/10

Next blog I'll delve into The Bookworm Turns/While Gotham City Burns and Death In Slow Motion/The Riddler's False Notion
Posted by shawnlunn2002 at 7:02 AM