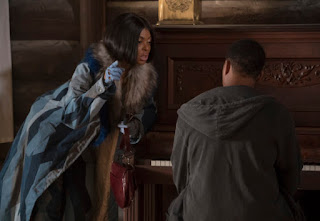 Claudia (to Cookie): "You can have Lucious but Dwight is mine."

It really has felt like a long while since the show was on the air. Last time I watched this, the DuBois family had been taken (Angelo in a more permanent way of course), Andre confessed to Lucious his past sins and Lucious ended up trapped in a cabin by a crazed Claudia.

It's of little surprise then that the latter plot strand was the main focus here with Claudia resorting to extreme measures to get 'Dwight' back by going full on Annie Wilkes on the guy. I genuinely thought this was going to be a storyline that would dealt with for a few episodes so I was rather surprised to see how quickly resolved it was here.

Cookie literally wasted zero time in working with Thirsty to find Claudia's own shrink and realise where she was keeping Lucious and even try to rescue Lucious as well before Claudia went full on psycho and tried to kill her before she killed her own therapist. I'm also a little surprised that Lucious spared Claudia but I guess that means she can reappear in the finale to cause more mayhem for Cookie and Lucious.

However, crazy as Claudia was, she did manage to point out the destructive aspects of Cookie and Lucious's relationship, even if she didn't say anything particularly new in that regard. Speaking of Cookie, we got some more prison flashbacks where she suffered at the hands of that prison guard following Poundcake's betrayal of her. I think thematically it did tie in reasonably well to Lucious's ordeal at Claudia's hands as well.

As for the rest of the episode, it was nice to see Porscha being supportive to Becky when she realised that the latter was pregnant while at the same time, I liked that Hakeem was there for both Jamal and Andre, even if his methods were a little hamfisted. Meanwhile the episode also ended with Andre ready to go into full on confession mode, which should make things very interesting next episode.

- That blonde look does not suit Cookie, at least not in this episode.
- No Anika, Eddie, Warren, Shyne or Tiana this week.
- Standout music: Not a lot this week, so I guess Tori and Hakeem's Talk Less though Claudia using a distorted version of Snitch Bitch to torture Lucious was something else.
- Chronology: Not long from where the previous episode left.

Birds In A Cage had some interesting parallels to both Cookie and Lucious dealing with prisons and their captors and it put paid to Claudia for the time being as well. It's not the strongest episode we've had and the music highlights were a bit lacking but it definitely had some lovely character moments though.