My Review of Buffy The Vampire Slayer's 8x29: "Retreat Part 4" 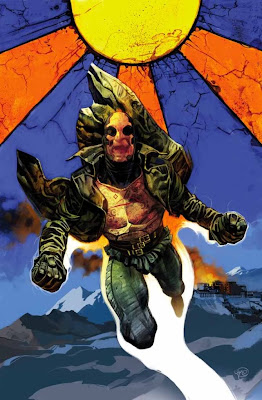 I’ve got to apologise for the delay in this review. Computer problems mainly factored into things but also, I can’t help but feel a little underwhelmed with this issue as well. It’s not that it’s an awful one, it’s just that very little feels like its happening. I can’t be the only one who felt that when reading this, yes?

Picking up from where mostly the previous one left off, we had the gang discussing what they were planning to do next. Being powerless meant relying primarily on military weaponry. The opening two pages set up a doom and gloom lecture not unlike anything we’ve seen or heard on the series itself. Lives are going to be lost. I don’t think there’s anyone reading this that doesn’t get that already.

Buffy, Giles, Faith, Andrew and Satsu more or less told the girls to fight with every readily available weapon they had. Willow interrupted the lectures by lamenting on their chances being slim. Yeah, way to boost morale there, Willow.

Although to be fair to Willow, it’s not like she isn’t vocalising the various thoughts that are running through the rest of the gang’s heads. The consequences of redirecting all of that ancient magicks was going to make the gang at their most vulnerable. Even Buffy seems to be realising that it might not have been such a bright idea upon reflection.

Of course Willow’s blow up didn’t sit that well with either Oz or Bayaarma. Both of them had a reasonably quiet little community. Buffy and the gang seeking sanctuary has thrown that one out of the window. However it’s not too surprising that some of Willow’s anger is directed at herself as well as the current predicament her and the Scoobies are in.

There was also some continual angst over what Buffy disclosed to her as well. Willow really seems to be fixated with having normality now more than ever. I guess it does make sense to a good degree.

At least Xander and Dawn are trying to stay more positive. Although I’m not doing cartwheels over them as an item, I just don’t seem as bothered by the idea of it than I think I should be. Trying to explain weapons to the other former slayers, they were certainly more open with their body language. The other people who don’t know they’re a couple at this point are probably the ones who want to deny all knowledge.

One person unsurprisingly bothered by the relationship is Buffy. There’s a moment in the issue where she’s distant with Xander and when Andrew attempted to get her to open up, she shut him down. I can understand why Buffy feels that way. I think I’d find it weird if one of my friends was dating a sister of mine. Still Buffy will have to adjust to it in time even if she doesn’t want to.

As for Andrew, when he isn’t trying to play camp counsellor, he’s put to somewhat better use in trying to fool Twilight and company that the slayers are still packing the magicks in a big way. Wouldn’t just have sticking with the real thing been the better choice all along? I won’t be surprised if by the end of this arc that all the gang’s magic is restored. Logically there’s no reason why it shouldn’t be.

Twilight’s already causing carnage with the army he sent out and while the use of a torpedo gave the Scoobies an advantage, Buffy still wanted the redirected power. Summoning up those three goddesses at the end of the issue is not going to end. You don’t need to be a genius to see that.

This cover was drawn by Massimo Carnevale and featured Twilight, which would’ve been nice if Twilight had actually featured in the issue.

Buffy: “We have to be ready to fight with every weapon, everything we can throw at them.”
Willow: “But it seems to me ... that we don’t have the one thing that matters. A chance in hell.”

Isn’t it slightly odd that in the past four issues that both Kennedy and Oz have had not at least one interaction? You’d think that they would’ve by now.

Willow (to Oz/Bayaarma/Buffy, re Kelden): “No! Don’t protect the baby! I’m not mad at you! I’m mad at me. I’m so angry at me; I cannot believe these aren’t black.”

Xander: “These are called manpads. No giggling, please. It means man-portable air defence system.”
Dawn: “It’s a single person surface to air missile launcher. It’s very heavy and if you’re not super-strong anymore, so either leave this for the huskier girls or team up.”

Apart from a few soldiers, not only was Twilight absent but there was also no signs of Amy, Warren or Riley either.

Monroe: “My wolves can help.”
Faith: “Sounds good. Knock your furry selves out.”
Oz: “You’ve decided to come to our side, Monroe?”
Monroe: “You’re fighting on the side of the ones who keep magicks. So I do believe ... that you’ve come to my side.”

It’ll be interesting to see how Monroe’s aid of the Scoobies pans out in the next issue. Hopefully he won’t emerge as another threat for the gang to deal with. The goddesses’ names in this issue were Remati, Vajrayogini and Ekajati.

There was a wonderful letter from Danny Hirschhorn blasting some of the more homophobic letters that have plagued the letter page in light of Buffy/Satsu. Reread “Safe” to get where he’s coming from.

Bayaarma (re goddesses): “The prayers offer a trade. We give them our powers, they protect us.”
Buffy: “Okay, I want to cash in that trade. How do I get their protection?”

The next issue and the final segment of this arc comes out on November 4th.

Despite one or two interesting moments, I have to say that “Retreat Part 4” is the weakest of the bunch. It feels too much like treading water and even with another attack, I don’t feel we’re getting anywhere this issue. It could’ve used some actual Twilight in it as well.

I find the Xander/ Dawn thing weird, its just not right. I would've much preferred to see Xander and Buffy together. Buffy not being that bothered about the relationship makes sense as they are in the middle of a battle, but hopefully she'll have some sort of reaction to the relationship.

I don't know. I love Xander and while Buffy needs to wean off her bad boy pattern, I always liked her and Xander as friends.

Buffy did seem a little upset in the issue, though she didn't vocalise it too much. Thanks for commenting.