My Review of The Sarah Jane Adventures 2x03: "Secrets Of The Stars" 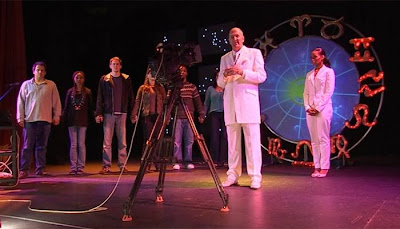 As someone who is pretty interested in astrology, I was immensely looking forward to this episode a lot. Astrology is one of those things that divide people. Some believe in it totally and others dismiss it as complete rubbish. I’m a bit of both. I can see certain consistencies but I don’t take everything at face value.

Cheryl however was someone that obviously did if her admission to Martin Trueman about risking her mortgage money was anything to go by. This confession was enough to make Martin admit that he was a fake, only then to become infected by the Ancient Lights. It didn’t fare that well for Cheryl either.

His little show about a third into the first episode of this story had everything you’d expect from a psychic or medium type of exhibition. People were amazed to find that he was intimately aware of certain secrets about them, others were still sceptical (Haresh for good example) and Sarah Jane herself was frightened.

With the amount of mentions that The Doctor has generated on this series, I did wonder if this was going to be a further hint that he would grace Bannerman Road with his presence. Sarah Jane was protective of The Doctor’s memory and more than perturbed when Martin was revealing to all about him leaving her.

I got something of a giggle when Gita accepted The Doctor as confirmation that Sarah Jane was nursing a broken heart. It wasn’t that long ago she was helping her former mentor and others move the Earth back to its rightful place. No wonder she wasn’t pleased when Trueman used it against her.

The rivalry between Sarah Jane and Martin was set up from the minute her and Rani had noticed Cheryl acting possessed towards her worried husband. The simple moan of not being able to enjoy a night out without something weird happening was enough. It was also timely to Martin nearly babbling about the dangers that Rani had suddenly been caught up in as well.

For her second story, Rani feels like she’s always been there. It doesn’t make you forget Maria as such but its nice feeling, given that Rani is proving to be resourceful during investigations as well. It was her who came up with the idea of the Ancient Lights and Astrology existing from another universe.

The astrology lessons in this story were certainly interesting enough. Luke spent a good chunk of the time dismissing the idea due to it contracting universal and physical laws but even he was surprised when Mr Smith brushed him up on other species looking to the stars for guidance.

As for Trueman, his motives weren’t entirely complicated stuff. He had spent most of his life systematically failing at everything he did and naturally he resented it. The idea of the Ancient Light inside him giving him knowledge and control over everyone was overwhelming. Even Sarah Jane failed to appeal to his better nature when trying to get him to stop.

The Ancient Light wanting to control the population and explore the universe felt old hat enough. Lots of alien races use something to get everyone under control. The Sycorax used blood; the Ancient Light used people’s star signs. Trueman even went one further by trying to turn Clyde into a would be assassin halfway through the story.

The Clyde and Sarah Jane scenes that followed this were some of the best. Sarah Jane was convinced that it was appealing to his humanity that prevented Clyde from killing her. Maybe there was some truth to it but the reality was that it was Luke touching Clyde that snapped him around.

The reveal of Luke being the one to break everyone out of Trueman’s control should’ve been obvious enough. There was such fanfare made about the fact that he didn’t have a birthday. Which meant not being governed under any star sign, which also meant that Trueman couldn’t control him.

I think this was probably the first time that Luke really got to save the day this season and it was done in a really neat way. It was also timely given that even Rani had succumbed to Trueman’s spell and that Sarah Jane was moments from doing so as well. Plus it added to some of the scenes with Luke and Sarah Jane that ended the episode.

Luke angsting over the lack of a birthday was enough of a reminder of his long line of differences, despite the fact he’s fitting in a little better. He seems to be also accepting Rani into the group more as well, given that she hasn’t been there all that long and he got some amusement from the up/down debacle that Clyde didn’t want to be reminded of as well. Seeing the humorous side to Luke is a good thing.

As for Rani’s parents, they didn’t waste much time in softening Haresh did they? He seemed more sympathetic and less hostile to Clyde. Plus he was annoyed when Martin upset Sarah Jane and fearful when Gita was one of the first people affected by Martin’s live broadcast. Apart from being possessed, Gita seemed less vocalised than her husband in this one.

Also in “Secrets Of The Stars”

Okay, star sign wise, both Sarah Jane/Haresh are Taurus (like the writer of this story, Gareth Roberts), Rani is an Aries, Cheryl/Martin/Gita/Clyde are Gemini. The better thing is that both Clyde and I share the same birthday, June 5th.

We got an archived footage of The Doctor and Sarah Jane from the Doctor Who episode “School Reunion” during Martin’s little show and tell.

Sarah Jane: “I knew it.”
Rani: “What’s wrong?”
Sarah Jane: “I can’t even have one night out without something weird happening. Come on.”

Clyde (re Trueman): “How did he do that?”
Sarah Jane: “Power of suggestion. Simple stuff. Parlour trick.”
Clyde: “Nobody ever mentions this again, okay?”

It seems that Gita is also making the faux paus of addressing Sarah Jane as “Sarah”. I think after Chrissie’s mix-ups, it’s an improvement but I can see why it would annoy Sarah Jane.

Trueman (to Sarah Jane, re The Doctor): “There was a man. A very special man. No, no, let me think. It wasn’t a romance. It was much, much more than that. He taught you so much. There was laughter and adventures and you prayed that your time with him would never, never end but then suddenly he left you.”

Rani (re Trueman): “You have an appointment?”
Sarah Jane: “Oh no, this is going to be an old fashioned foot in the door kind of job.”
Rani: “Need an extra pair of feet?”

During his research, Mr Smith mentioned both Draconian and Ventiplex while Trueman made Doctor/Companion comparisons with Sarah Jane and Rani.

Haresh: “I know exactly what you’re up to and I’m not falling for it. You can stop this now. The wind up is over.”
Gita: “I mustn’t stop. I’ve got to go.”
Haresh: “Okay, and now you’re scaring me. Please tell me you’re having a laugh, I won’t mind? You can tell everyone. Just say this is you pulling my leg.”

Clyde: “You don’t understand something so you call it alien. Sarah Jane, you always say there’s so much more to the world that most people will ever know. Why not this?”

Sarah Jane talked about being taken over before. I know it’s happened to her a few times. Two that stick out for me are “Planet Of The Spiders” and “The Hand Of Fear”.

Trueman (to Sarah Jane): “Do you really think that’s going to work, making an appeal to my better nature? Don’t you see the human part of me loving every moment of this?”

Trueman (to Sarah Jane/Luke/Rani/Clyde): “You flicked a switch. Flicked a switch? The Ancient Light survived the big bang and you think you can stop me by flicking a switch?”

This was another story to feature the ever intrepid Trinity Wells, who was also revealed to be a Leo.

I think if you leave prejudice aside in regards to the nature, history and general point concerning astrology, “Secrets Of The Stars” is actually quite a fun story to watch. Trueman and the Ancient Lights are also possible return worthy villain material as well come to think of it.