My Review of DaVinci's Demons 2x04: "The Ends Of The Earth" 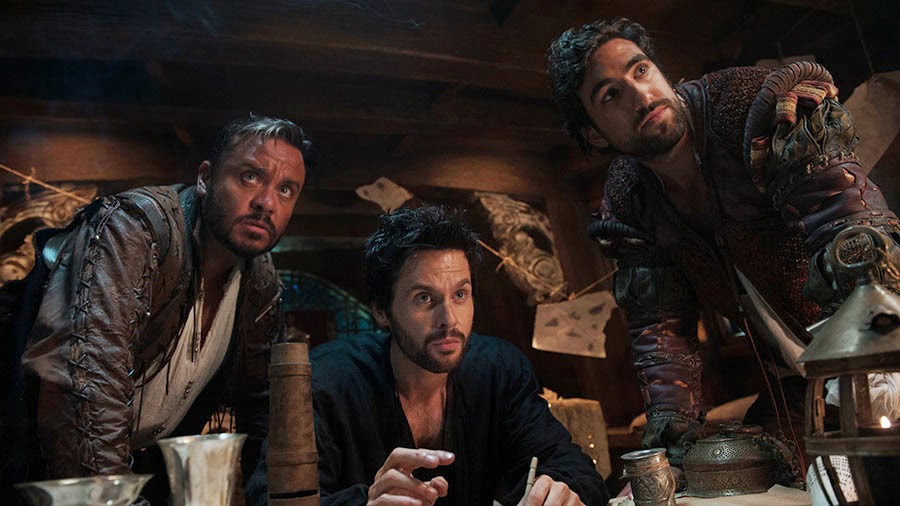 I'm beginning to wonder if last week's episode title was the one that should've been given to this one. DaVinci might have spent a while talking about the Earth being round and failing to get his newly acquired crew to trust him but it was really this episode in which the voyage really did feel like it was damned.

I don't think I can blame the crew for having their misgivings about DaVinci's credentials as an expert of the sea given that it took him until practically the end of the episode to actually figure out where they were actually going but at the same time, their mutiny put DaVinci in a pretty unenviable position. Zoroaster might have been right to be disgusted with his friends putting Yana and her company back in chains but given Amerigo's suggestions, it might have been the better of the two options here.

It's a shame that the mutinous crew ended up embarking on a suicide pact instead just as DaVinci had managed to reach out to them as well. If things are going this bad now, I can imagine what they will be like once DaVinci and company actually enter the New World. Well, that and the fact that we already have a certain scene from the opening episode to look forward to once again anyways.

As for Riario, things weren't exactly going well for him either. Nico managed to needle him about his beliefs (along with bedding Zita) and the storm at the end also proved that Nico had a point. That being said, this was another superb episode for Riario. When he wasn't trying to manipulate Nico, we also saw his tender side with Zita as well and then there was those flashbacks to behold too.

It's nice that we didn't have to wait too long to find out that Amelia was actually Lucrezia's younger sister and that Riario had tried to have the girl spared were it not for his homicidal uncle usurping Lucrezia's father for papacy. I think this is the first time we've had a real insight into Lucrezia's past and it managed to do a far better job outlining her motivations than most of last season did.

Lucrezia might still be a lukewarm character for me but she has gotten better in the last few episodes (keeping her away from DaVinci/Lorenzo seems to have done that for her) and her grudging alliance with Lupo while trying to grudgingly let her father orchestrate her uncle's downfall has managed to become rather interesting to watch. As for that sword she's managed to acquire - well, I am hoping that her trip to Constantinople will continue to see the character on the interesting path she's now been put on by the writers this season.

Last but not least - I quite enjoyed the Lorenzo and Piero scenes but them getting captured came as no shock at all. It was nice that between being attacked by one lot and then snared by another that Lorenzo managed to get Piero to open up about his volatile relationship with Leonardo, even if it didn't reveal anything we hadn't already known from back in "The Tower". Still, Lorenzo's attempts of getting to Naples has managed to hit an obvious snag so far. I wonder how both him and Piero will get out of this one?

Also in "The Ends Of The Earth"

Sixtus himself was mainly relegated to flashbacks in this episode. The way he snapped Amelia's neck though - that was pretty chilling.

DaVinci (re slaves): "I can show them the world is round. Teach them."
Amerigo: "You don't teach their sort."

I missed not seeing Clarice and Carlo in this episode. I was kind of hoping for at least one scene with the two, especially given how the latter was introduced last week. Also no Vanessa as well.

Riario's long hair in the flashbacks managed to make him look somewhat younger too. Overall those flashbacks were actually nicely shot too.

DaVinci: "I understand why they don't trust me but you should."
Zoroaster: "Because you're a great artist?"

Lucrezia (to her assassin): "We will endure this friend. I've endured worse."

Chronology: A few weeks since the events of "The Voyage Of The Damned"

Again, there's no denying that this show has improved this season. Maybe it's the less focus on the sex, maybe it's more of a concentration on better plots but "The Ends Of The Earth" certainly made for an interesting hour nonetheless. However I am glad that by next week, it does look like we'll finally be in the New World though.