Sense8 - All I Want Right Now Is One More Bullet 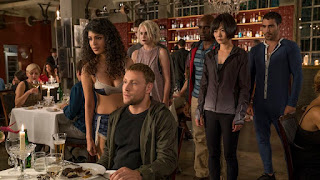 Lila (to Wolfgang): "I'm going to enjoy scraping you off my shoe like the dogshit that you are."
Kala: "Bring it bitch!"

Ah, yes - one of the most standout moments in the Season 2 trailer for the show and it appeared here when Wolfgang chose not to go with Lila's insane plan to have Berlin become a sensate only hotspot. Kala certainly chimed in with her hatred for Lila but it turned out to be justified considering that Lila and her Cluster are absolutely nuts.

This show continues to deliver on the action sequences and the sparring Clusters (minus Nomi, who knocked herself out, I kid you not) at the restaurant with the ensuing gun fighting was truly a stunning moment to behold. Lila's certainly exposed herself to be as big a threat to the gang as Whispers/BPO. On the plus side though, at least Wolfgang has seen Lila and her Clusters for who they truly are though.

Of course when we weren't getting that stylishly choreographed shoot out, we also had the issue of Whispers to deal with. Both Jonas and Wolfgang managed to talk Will out of doing something reckless while the former also revealed that he made his own deal with the devil to stay alive. It seems that Jonas is more useful to the BPO alive than dead, which for some reason isn't that surprising. Though truth be told, it's just more that he's on borrowed time than anything else.

Speaking of Whispers, he might have gotten out of dodge with his family, but it's become more evident that he's rather screwed himself. I do wonder if the writers are setting up a scenerio where our Clusters are going to have work with Whispers for the greater good or something in the last few episodes?

As for the rest of the episode, there was a huge focus on Lito's depression. Parts of the episode really upped the ante on him mourning his career with even Sun somewhat side eyeing him a little but there was an added poignancy when he fully explained to Hernando and Daniela about his dream dying during a viewing of From Here To Eternity. Hopefully though the next episode will see Lito making some moves to try and relaunch his career though.

- Riley and Amanita technically met in this episode when Nomi knocked her out. I also continued to enjoy the Will/Riley/Diego team up as they looked for the BPO contact from last episode.
- Capheus's political aspirations this week involved a smear campaign and a guy pointing a gun at him for good measure. Sun meanwhile was hiding out in a love hotel.
- I liked that Kala talked to Will about his heroin use in this one. Also, the show is really making Rajan look more and more dodgy, aren't they?
- Chronology: From where I Have No Room For Hate In My Heart left off.

All I Want Right Now Is One More Bullet definitely delivered on that final confrontation alone. Seeing two groups of Clusters going at each other was brilliant and while Lito's plot felt too comedic at times until the last bit of it, I did enjoy it along with the Capheus moments.