My Review of Empire's 4x06: "Fortune Be Not Crost" 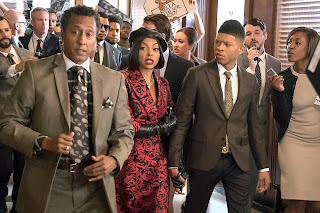 Hakeem (to Anika, re Bella): "Yellow. Her favourite colour is yellow."

Sorry for the delay with this one and after just finishing it, I really wished I had watched it a lot sooner as well. I just knew that the custody case for Bella was going to be a bumpy one, but even I was a little floored with how nasty it managed to become as things progressed in this episode.

I knew that Mama DuBois was going to come up with something that would scupper Hakeem's chances to keep Bella, so telling the court about their Tuesday meetings and then playing tapes where Hakeem pretty much called out every single member of his family just to finally stick the knife.

The end resulted in Anika getting custody of Bella and as annoying as that was, it does serve something of a purpose. As well as showing us the levels both Angelo and his mother will go to screw with the Lyons, it's also reignited Lucious's own particular bloodlust and while Diana is currently having her moment in the spotlight, it will be the Lyons who will ultimately have the last laugh.

The court scenes were some of the best I've seen on any show to be honest. Whether it was Cookie's scathing commentary on Anika, Angelo going full throttle to discredit the Lyons while Cookie also revealed that Anika tried to kill herself that one time or even Hakeem representing himself and showing that Anika barely knew Bella as well.

For all of Hakeem's faults as a character (in this episode alone: blowing up at poor Tiana, not telling his family about meeting Diana etc), he really does care for Bella so the episode did manage to generate the right amount of sympathy for him when Anika won custody of their daughter. I did like the last scene between the two of them and if I were Anika, I wouldn't get too comfortable with the DuBois at the moment, even if Angelo is clearly making the moves on her.

Away from the court case and the Lyons vs. the DuBois, this episode also had Becky reunite with her ex-boyfriend, J Pop and they certainly seemed to have some unfinished business. Much as I want Shyne gone from the show, he actually worked well as comic relief and while Becky's storyline was seperate from the main action, it certainly didn't hamper the episode itself.

- Warren and Jamal looked like they had swapped jobs in the opening scene. Both Angelo and Diana have clocked on to the fact that Warren now has genuine feelings for Jamal. Also Andre's therapist is part of Diana's plan too?
- We were meant to see Claudia in this episode but her scene was clearly cut out. Maybe it'll appear in a later one.
- Standout music: Jamal and Warren's Love Is A Drug v2.
- Chronology: Not long from where The Fool left off.

Fortune Be Not Crost certainly delivered on the most soapiest and nastiest of court room dramas going as the DuBois clan really did play their hand at being truly dangerous to the Lyons. Of course with Lucious now back in the game, it seems like things will really heat up though.