And here's a look at some of the shows I've been catching up with in the last few weeks. 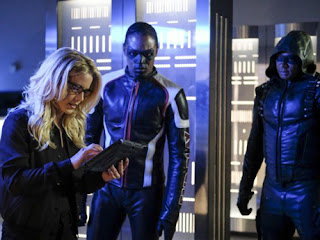 Arrow: The first four episodes of the show have been a bit. Aside from the premiere delving into the fallout of the previous finale's explosive ending, I have not missed the flashbacks and cutting away from them has actually helped the show so far. Saying that, I'm not taken with either Rene or Dinah this season, am wary about the return of Olicity but on the other hand, Michael Emerson is already great as Cayden James, the Oliver/William scenes have been decent and Black Siren is far more entertaining to watch than Diggle posing as the Green Arrow or the not so newbies. Swings and roundabouts really. 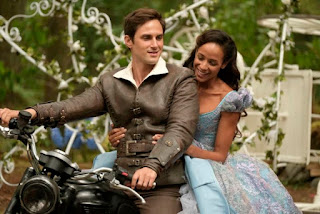 Once Upon A Time: Five episodes into the latest season and it's clear to me the show ended back in May and what we've got is a very hit miss spin-off in it's place. Getting the negatives out of the way first: Henry/Jacinda's epic romance is a damp squib with neither being well written and Victoria is a pretty poor villain and I miss the gang who are gone, while the ones who've stayed seemed a little lost in this 'requel' to be honest. On the other hand though, the Witch is an interesting would be villain while Tiana, Alice and Drizella are better than expected character but this new curse and location is already losing momentum and we're not even half way into the season, which is a worrying sign. This season hasn't been terrible but it's undeniably lacking something though. 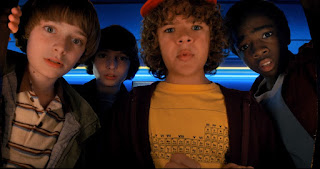 Stranger Things: Quick note - I have only watched the first episode of Season 2 so far and between the controversies the show is generating both on and off the camera and being swamped with other shows, I might take my time with this one. Anyways one episode in and things are off to an interesting enough start. We've got new characters like Max, Bob and Billy who seem intriguing enough, the show didn't waste time in reintroducing Eleven into the mix and Will's nightmare about his time in the Upside Down world are being dealt with well enough on screen. So far, a very good start to the new season. 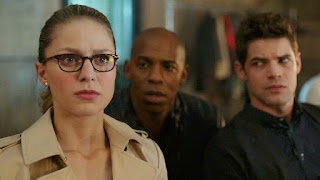 Supergirl: I have to admit the first two episodes this season were okay while episodes 3 and 4, the former exploring J'onn and introducing his father with the latter dealing with a faith cult were stronger efforts. The plus side to this season so far has been the slow introduction of Samantha's Reign arc (though less Ruby would be nice) and Kara snapping out of her Mon El shaped funk for a bit while the imminent Alex/Maggie break up has been a bit more wearing to be honest. Slightly the weakest of the returning CW DC shows so far but yay to more of Lena though. 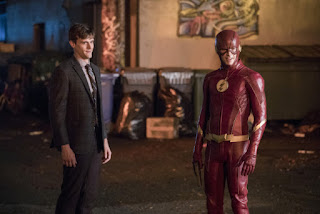 The Flash: So far, there are a few things really working in this season's favour. First of all, not having a speedster antagonist was really overdue and The Thinker is working out well, despite having yet to properly interact with Barry while the overall lighter tone has been a good thing along with Barry/Iris getting their own issues out of the way first. We've also had Wally exit and Ralph added into the mix as well as Jekyll & Hyde aspect to Caitlin's Killer Frost and more of Cisco/Gypsy in the mix with some decent guest baddies. I'm waiting for something really big to happen yet but other than that, this is an improvement on last season. 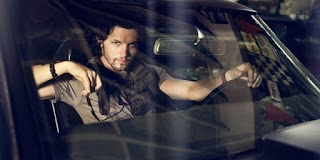 - Nathan Parson has been cast as a character named Nick for an arc in Once Upon A Time. We will also be meeting an older version of Robin in later episodes.
- Peyton List will be replacing Maggie Geha as Poison Ivy in the second half of Gotham's fourth season.
- Wentworth Miller is currently filming his final episodes for both Legends Of Tomorrow and The Flash.
- Jesse Rath has been cast as Brainiac 5 for Supergirl. Blake Ritson will also play Brainiac for Krypton.
- Grey's Anatomy's 300th episode will feature Izzie "in spirit".
- Star Trek: Discovery has been renewed for a second season. CBS All Access have also expressed interest in reviving The Twilight Zone for their streaming service.
- Tatiana Maslany, Evan Peters and James Van Der Beek have been cast for Ryan Murphy's 80's LGBT series, Pose, which is currently filming.
- A series adaptation of The Lord Of The Rings could be happening with Amazon.
- FOX have cancelled Wayward Pines after two seasons.
- FOX are also developing a female led 24 spin off series.
Posted by shawnlunn2002 at 4:39 AM

Labels: Arrow, Once Upon A Time, Stranger Things, Supergirl, The Flash