My Review of Gotham's 4x08: "Stop Hitting Yourself" 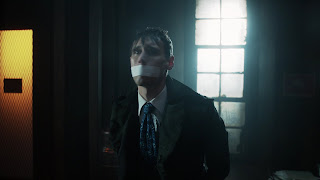 Nygma: "Winner takes me and featuring your champion, Solomon Grundy."

Oh Ed, I'm actually surprised with that motormouth of yours that someone hasn't actually succeeded in killing you at this rate. Then again, you are the Riddler and plot armour exists for a good reason, even if your attempts of antagonising Oswald from afar were always going to backfire on you.

A part of me wasn't surprised that Nygma would take his grudge out on Penguin by lampooning the shit out of him during the fights in the Narrows and while he might have played his former friend like a certain fella who shall not be named here, the one thing I took out of it was Cory Michael Smith's flair for physical comedy.

The bummer though for me was the fact that Oswald didn't directly confront Ed on his open mocking of him and instead decided to send both the Sirens and Firefly in order to deal with the blabbermouth riddle man as a result.

For Eddie, the worst thing that happened to him as getting tied up and gagged by Selina but other than that, he nearly succeeded in turning Butch/Grundy against Tabitha and thanks to Leslie and Barbara dealing with Firefly and a treacherous Cherry alone, Nygma lives to mock Oswald for another day.

The arc with Nygma has been fun to watch and I quite liked that even when he was being a jackass he actually managed be rather helpful with Leslie. Her decision to defy and turn everyone on Cherry (along with Babs shooting the latter) meant that she now became the leader of the fight clubs and if she can rein Eddie in a little, then Leslie truly might find her calling in the city without having to cross paths with Gordon again.

Speaking of Gordon though, this episode he became Captain and Bullock got a demotion. While I haven't been as invested in their bromance as everyone else, I did feel bad watching the two friends fall apart in this episode but on the other hand, Harvey wasn't the only being dumped by Jim this week. It seems that Sofia too also got the cold shoulder from Jim as he made his annoyance towards her manipulation of his promotion more apparent.

For all of Sofia's strategic moves, it seems that her luck might be running out a little though. This week when Oswald wasn't smart over Ed taking the piss out of him and training up a kid into becoming a future serial killer, he also seemed to be getting a clue that Sofia isn't quite the friend she's making out. I really hope for Sofia's sake she's got a back up plan because she'll probably need it by next week.

- As Nygma dressed up in Oswald's usual look, the latter has been updating it as well. I'm actually starting to miss them interacting now.
- Leslie got to smack Barbara and the latter seemed not disappointed that Butch/Grundy was alive in this episode too. Nygma also referred to Tabitha as Tigress and wore some outfits not dissimilar from Batman Forever.
- No Bruce or Alfred this week.
- Chronology: Not long from where the previous episode left off.

Stop Hitting Yourself was a bit of a fun episode. The Narrows plot could've gone the way all these Fight Club type stories on genre tend to go and be utterly dire but it turned out to be rather entertaining and I'm loving this current Sirens line up as well as Nygma getting some of the lines along with his ass handed to him a little.