My Review of Legends Of Tomorrow's 3x07: "Welcome To The Jungle" 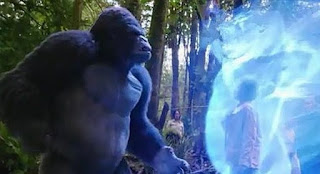 Grodd (through Sara): "Kneel before Grodd."

I bet the writers were pinching themselves with delight of getting to use that line in an episode with the telepathic gorilla from hell. After popping up in The Flash several times in the last three years, it was time for a different group of people to have to deal with Grodd for a change.

Having Grodd show up in 1967 Vietnam during the height of it's war was actually a great move for the show. Grodd was able to take advantage of people's desperation for peace by influencing them into allying themselves with him and even to encourage his scheme for dealing with humanity once and for all.

Of course the Legends were there to actually stop Grodd and at one point in the episode, Amaya was actually getting through to the evil gorilla until Mick's father came blundering in and undid all of her efforts but then again, we are talking about Grodd and every time he's been offered a chance to live away from human influence, he still comes back to try and kill them.

As soon as he was made aware that the Legends had a time ship, he possessed Sara (who was largely out of action this week otherwise) to take it over before the latter got whacked with a frying pan by Isaac Newton. Of course Grodd might have been defeated by the Legends/a frying pan but he has made a new friend in Damien Darkh, so we'll be seeing him again then.

When this episode wasn't dealing with Grodd, it was also confronting Mick's daddy issues as the latter was also in Vietnam at the same time. It was the very reason why Mick didn't want to go into the jungle but the second plot of the episode was pretty strong with some great insight into Mick's past, his darker side and self loathing and even a rather supportive role for Nate.

Much as I love Mick's comic side, it's great when the show remind us of his darker and serious side too. What this episode lacked in Sara definitely made up for with Mick though. Also while I'm not always Nate's biggest fan, pairing him up with Mick really worked for the character and it was nice seeing him be rather supportive.

Speaking of team ups, the show has been hammering it home that Jax and Stein will be going their seperate ways and this episode saw the latter using some outside help to split them up. I'm really going to miss Stein even if it will be interesting to see how Firestorm will work without him though.

- Stein managed to get Galileo, Marie Curie and Isaac Newton to help with his problem. Jax also got a pecan pie recipe from President Johnson, whom he saved in this episode.
- The show seems to be slowing setting up a Zari/Ray pairing. I did like Zari's reaction to Grodd being a former ARGUS prisoner as well.
- Really surprised they didn't make a Dian Fossey reference with this one.
- Chronology: 1967 Vietnam but also Thanksgiving 2017 going by one scene in the Waverider as well.

Welcome To The Jungle was another fun episodes. The Vietnam war, a president, three geniuses and a telepathic gorilla for the price of one along with a Thanksgiving meal and a pecan pie recipe. The show really is a shopping list of the strangest items that continue to result in something great.