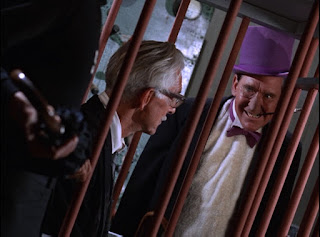 With the Joker, Penguin and Riddler showing up the most prominently in the first season, it's not too surprising that one of the three would end up being the focus for the first season finale. The Penguin got the honours of being the main antagonist for these last two episodes and he wasted no time in kidnapping Alfred and having the poor butler become his spy for Multimillionaires' Annual Award Dinner, which both Batman and Robin managed to figure even if it still resulted in them being subjected to one hell of a balloon/air test as part of the cliffhanger. 7/10 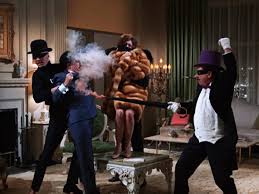 The second part to this story and there's more trickery afoot with the Dynamic Duo escaping from their cliffhanger moment of the previous and using their own knowledge of Alfred's brainwashing against the Penguin himself. Not that it stops the latter from attempting to kidnap Miss Natural Resources while his moll, Finella does make a rather predictable turnaround and help out Batman and Robin to take Penguin down. Overall, it's a good finale for a largely enjoyable first season. 7/10 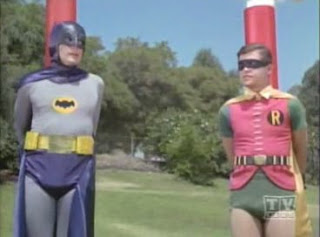 New season and we open up with a new baddie for the series -  Fenton Quigley, a.k.a. The Archer, a Robin Hood type baddie, who like the Bookworm is rather eloquent in his speeches as well. At first I wasn't particularly blown away with this two part story and while I'm still not, it's diverting enough. Alfred lands himself in trouble when he goes undercover to learn more about the Archer while Batman and Robin themselves become target practice when they're nabbed by Quigley and his not so merry men. 6/10

2x02: Walk The Straight And Narrow 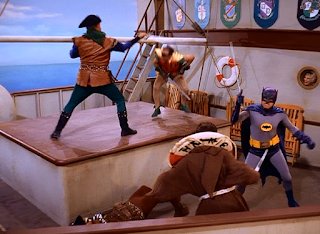 Like the first episode, I wasn't crazy about this and as a villain, I am somewhat glad the Archer was a one off. It's not that he's a bad villain as such, it's just that despite his lyrical way with words aside, he's just not that exciting to watch either. I did however like the boat battle with him and the Dynamic Duo and there was something rather amusing in seeing Alfred pretending to be Batman with a cold along with the obviousness of Alan A Dale being one of the Archer's men. Overall, not a great opening two parter but slightly better on a rewatch. 6/10

Next blog I'll delve into Hot Off The Griddle/The Cat And The Fiddle and The Minstrel's Shakedown/Barbequed Batman?
Posted by shawnlunn2002 at 5:59 AM