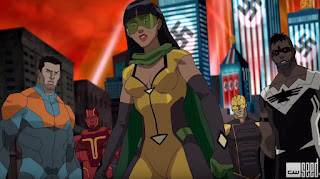 I know it's been a while since this was actually released but I've finally caught up with this animated series and having watched the first six episodes, I definitely want more of Raymond Terril. I loved the character's live action appearance in the Crisis On Earth X crossover last year and Russell Tovey's casting for the role was nothing short of sublime.

In last year's crossover event, we quickly learned that The Ray was actually from Earth 1 but starting off this mini-series, we meet the Earth X version, teamed with his allies, Black Condor (Jason Mitchell), Phantom Lady (Dilshad Vadsaria), Dollman (Matthew Mercer) and Red Tornado (Iddo Goldberg) as they spend the first segment of this story doing battle with Overgirl (Melissa Benoist), Dark Archer (Mathew Mercer) and Blitzkrieg/Evil Flash (Scott Whyte).

Let's be blunt - things mostly end badly for our Earth X heroes as the terrible trio quickly best them and Vibe (Carlos Valdes) has to get Earth X Ray out of them, only for the latter to die and transfer his powers to his civilian Earth 1 counterpart.

It's in the middle of this story that we're given some scope on our version of Raymond Terril. He's a guy wanting to do good but is scuppered by his bosses, has a rather ship worthy friendship with his also non powered version of Black Condor aka John Trujillo and still hasn't come out to his parents, who he seems to have a slightly strained relationship with.

There's also a rather adorable sequence where our Ray also starts to get romantically involved with a guy named Jacob (Sunil Malhotra) but between settling into his new found role as the Ray and then being kidnapped by the end of the sixth episode, it seems our golden boy has a few pressing problems as the Earth X trio have decided to pay our Earth a visit.

- Both Cisco and Caitlin from our Earth briefly appear in this story. We're also meant to be getting Mari in the second batch of episodes.
- I'm surprised they didn't get Stephen Amell and Grant Gustin to voice their Earth X counterparts but both Matthew Mercer and Scott Whyte did a good job here.
- Civilian Ray doesn't look too much like Russell Tovey but his awkwardness is beautifully captured throughout this series though.
- Chronology: I'm guessing maybe a year or slightly less before the big Crisis On Earth X crossover event.

Freedom Fighters: The Ray might have gotten a lot of unfair flack (as did last year's crossover event) for the subject matter that it uses but as an animated series, I really enjoyed it. I loved Ray in live action form and this batch of episodes has made me want him back once again. I can't wait to see what the remaining episodes will be like.