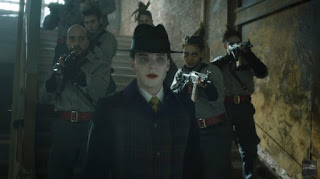 This season on Gotham we've had plenty of glimpses of the show riffing off the comics. The notable ones have been the likes of Year One and The Long Halloween and with this episode, we can now add The Killing Joke into the mix as there are some blatant motifs from that particular comic on display with this episode alone.

Jeremiah seemed to have two big plans in mind. The first was to blow up Gotham in order to rebuild the city to his liking and the second was to drive Bruce Wayne insane. He failed with the first one, thanks to both Gordon and Bullock but he came very close with succeeding with the latter one. It was also the one where his energy seemed a little more focused on too.

With Alfred kidnapped, Bruce was forced to act on his own/actually with Selina in order to rescue his butler but Jeremiah certainly didn't make it easy for Bruce, convincing the billionaire that Alfred had been driven insane with the fear gas at one point and even dead during a violent confrontation between the two.

It was thanks to Selina that Bruce soon realised that Alfred was actually alive and that Jeremiah had gotten the Scarecrow to mess with his head. I did like the confrontation between Scarecrow and Selina, though I couldn't help wonder where Tetch had been as well. Anyways it was nice to see Crane again even yet again he was relegated to helping out the bigger bad in the equation.

Of course while Jeremiah might have to drive Bruce mad with Alfred, he came close to succeeding at the end when he showed up at Wayne Manor and shot Selina. Now, I don't believe for a second that Selina is a dead woman and I wouldn't be surprised if she's still joining the fight with a bullet wound in next week's finale. That said, it was certainly a way to end the episode on.

Keeping with Jeremiah for a bit. The guy prides himself on being seen as sane and also resented the comparisons various characters made to him and Jerome. He threatened Bullock with more people's lives and had no problem in blowing up the Jongleur in order to take away Oswald's upper hand on him as well. However, he really did prove himself unhinged when he burned his brother's former followers to a crisp after Gordon publicly humiliated him.

Then there's Ra's. He's mostly stayed out of things this season but it seems that his obsession with Bruce has made him throw his lot in with Jeremiah. The team up with these two has the potential to be very interesting but you know that they're both going to turn on the other very soon. Also given the title of next week's finale, I am hoping for a few more faces to pop up, especially with the growing possibility that it could be the series finale next week as well.

As for the rest of the episode, that little grenade Gordon threw into Leslie and Nygma's relationship was nicely done. We know that Lee and Ed's connection was going to be severed and it seems that Jim's speeding things along while Oswald couldn't make it more obvious that he doesn't care about Butch being cured. Still though, we know that Hugo Strange is back next week but I'm not holding my breath on things going right for Butch to be honest.

- Where was Ecco this week? I thought she'd be around helping Jeremiah but at least she wasn't killed by him or someone else.
- I liked that Harvey was the one who stopped the bomb and in general, the back half off this season has been better with him. Also points to Harper for having his back as well.
- Another plot with Leslie leaving the city. If the show comes back for another season, it's not like she'll remain gone from the show.
- Chronology: From where That Old Corpse effectively left off.

One Bad Day certainly upped the game into Jeremiah's descent into madness. I have to give Cameron Monaghan props for making him so different and even more terrifying as Jerome, even if the character should've been introduced earlier in the season. As for the next episode, I cannot wait to see it but I am also hoping there's still another season to come.