My Review of Empire's 4x17: "Bloody Noses And Crack'd Crowns" 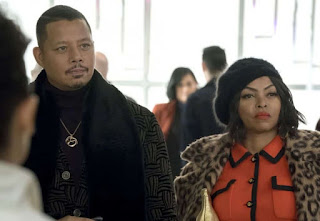 Eddie (to Lucious): "I'm going to give you one last chance to save yourself."

Well, there's one more episode until the finale and for a penultimate episode, this was simply okay. Not strictly a bad episode as such but the back and forth between Lucious and Eddie trying to outdo each other in order to hold onto Empire was fairly predictable.

It made sense for Eddie to gain the upper hand and having proof of Lucious's murder of Shyne was something that even the latter should've seen coming. I think by doing that, Eddie has probably set himself up for a similar fate in the next episode or possibly next season. Either way, Lucious and Cookie should've seen this coming.

On the other hand, at least they were willing to fight Eddie at every corner. Andre being sent in to work with Eddie, Anika and Patel might not have been initially successful, but they did gain something of an upper hand and their latest media event also managed to pull at some heartstrings and get a few celebrity backers, even if Eddie managed to undo all of that with the last scene.

Aside from that, not really much else of consequence really happened in this episode. I guess there was Hakeem sort of getting serious with Haven before the latter kind of blew him off for her boyfriend as well as Jamal and Tory briefly having a spat over their 'Collective' suddenly being outed at a public event but none of those things really made huge waves here.

There was a few more Cookie/Lucious flashbacks to the early days but they were archived footage, too brief and weren't needed in order to convey the former considering a back to basics approach in order to oust Eddie though.

- I liked that Becky was keen on putting Tiana's ego in check. Tiana really has become insufferable the last few episodes.
- Not a shock that Eddie has a thing for Anika. I did like that Blake stood up to his racist father on live television.
- Standout music: Good Foot and Emotions by Jamal and his Collective group.
Standout music: Not long from where Fair Terms left off.

Bloody Noses And Crack'd Crowns is a solid though not spectacular penultimate episode. I did like most of it but it felt very by the numbers at times and while Eddie has been a decent baddie for this second half, I won't be too sorry to see him leave now.