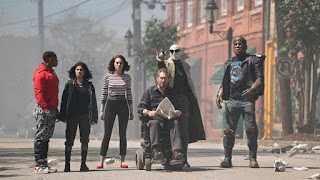 Larry: "Guys, I'm gonna suggest dealing with the issue at hand here and then meeting the world's most powerful little girl."

It's finale time and in case you weren't aware of that, this episode delightfully had Mr Nobody summing up fourteen episodes worth of antics before delving into the main events of this one. The events mainly seemed to be our band of misfits getting the hell away from Niles and trying to move on while flashbacks revealed each moment Niles orchestrated the team's formation to begin with.

I wasn't  surprised that the groups broke into Larry and Rita living together with the latter unsuccessfully trying her hand at being an acting coach while Cliff was looking out for a Jane desperate to escape all the voices in her head while Victor was all by himself. Then the use of a certain 90's song managed to pull everyone together for the final battle.

When I say final battle, oddly enough not with Mr Nobody. No, our season Big Bad for all his delightfully commentary unwisely formed a trinity with Admiral Whiskers and Ezekiel the cockroach and was quick benched by the pair of them when they grew in size. Nobody did the only thing he could do - get drunk and feel bad for him with a side order of manipulation from Rita and Beard Hunter feeling a tad sorry for him as well.

As for Ezekiel and Whiskers - I probably could've done without one particular scene but they did make for a fun set of adversaries for the gang, even if the whole devouring them part was useful as Larry managed to use his Negative side in order to save the day. However, cockroaches do survive nuclear blasts, even on sentient streets and Ezekiel nearly emerged as a victor, until we got a stomach slicing scene to release our heroes. Still though, good effort for a cockroach.

With both Nobody and Beard Hunter somewhat trapped in a blank painting, I'm guessing we'll be seeing both of those two next season. Another addition to the next season will also be Caulder's daughter Dorothy Spinner. I guess we did need another regular female for next season but I'm not sure why any of our current gang would want to be around Caulder after learning what he had done to them.

- The show is rumoured to be renewed for a second season but will apparently be 10 episodes, which might be a good thing.
- It's a shame that Flex randomly disappeared even if he did save the Dannyzens from Nobody and company. He better be back next season.
- Standout music: Chumbawumba's Tubthumping of course.
- Chronology: Still 2019 but plenty of flashbacks to previous eras for each of our gang members.

Ezekiel Patrol marked a surprising but fun way to end this season and put Mr Nobody on hold. While it wasn't quite as good as previous episodes have been this season, it was a satisfying ending for the first year and there was enough to set up the second season pretty well.