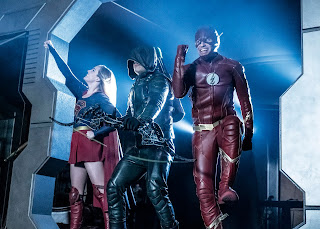 Nate (to everyone): "We should've done the crossover."

Ah, yes, it's funny you should mention that. While the Legends wisely/unwisely sat out the events of Elseworlds, it does however seem like they will not be able to avoid the imminent events of Crisis On Infinite Earths as one scene in the episode had the Monitor observing their flare for chaos and making a mental note while snacking on popcorn.

Fun as it was to see Sara as Supergirl, Nate as the Green Arrow and Gary as the Flash, the little spoof directed by Ava and Zari did actually serve some purpose as the gang had to think outside the box in order to save the day from Neron's desire to reign hell on Earth. Yup, people, this is where Hey World actually became a thing.

I can gripe about Hank's path being dramatically changed all I want or I can go with the flow and watch our Legends and the monsters they saved from the Time Bureau try and change public perception of the latter. Then again, I can also do both - the show really did chicken out of making Hank into a bad guy but at the same time, the spectacle on display was amusing, until Tabitha and a fully grown Wextible/Mitra nearly derailed everything that set up here.

Of course, it was younger Zari who had bonded with the dragon that managed to ensure we didn't get a situation similar to The Bells while at the same time, things did end on a rather bad note for Tabitha. Jane Carr clearly was having a ball as the wicked witch before getting eaten up by the very creature she was trying to get to incinerate everyone else. I think I'll miss Tabitha a bit more than Neron if I'm being honest.

Speaking of Neron - of course it would be Ray's sacrifice for Nate that would be the key to it. Nate knew it and he agreed with Constantine to let Neron kill him, thus ending Neron's arc in a fairly okay-ish manner. Even though I do like Nate as a character, I actually think the show made a bad call by undoing his sacrifice but at the same time resulting in the show losing Zari.

According to the producers, while Tala Ashe will be a part of the fifth season, Zari is done as a character, so it will be interesting to see who Tala gets to play next season. This is notably the second time the show has done this with a female character/actor as we've seen with Maisie Richardson-Sellers as Amaya and Charlie respectively.

Saying that, while Zari is gone, we do have another airbender in the mix with Behrad (Shayan Sobhian) taking his sister's place and only Nate being seemingly aware that something is amiss there. I know we were due a casting change for next season but a part of me is still annoyed that we're losing Zari yet keeping Mona as a character. I would've even sacrificed Gary for Zari but at the same time, it'll be interesting to see how Behrad fits into the mix with the gang.

In other casting news, I genuinely was convinced this episode would write out Constantine but with Astra making deals at the Soul Exchange and giving some of the worst people an Encore, it looks like the show has managed to prolong his time on the Waverider. I'm pretty happy with that development and evil Astra could be a fantastic antagonist for the next season as well.

- During his spell in hell, Ray was playing Giant Jenga with Vandal Savage of all people. I disliked the character in the first season but found him more charming in this episode. Funny that. Nora also is still a fairy godmother.
- I did find it amusing and petty that Oliver, Barry and Kara did refuse to help with the great plan to stop Neron. Then again, they were probably occupied with their own baddies at the time.
- Standout music: The use of Sweet Baby James during a crucial moment to revive Nate.
- Chronology: Mostly 2019 for the gang. The show's fifth season will air on the CW from early 2020 and will take in the final parts of the Crisis On Infinite Earths crossover event.

I'll admit compared to previous finales, Hey, World! might not be as strong as what we've had in the past but it did bring the Neron storyline to a decent end and it's nice we're not done with John as of yet either. I do however dislike the nature of Zari's exit and given the criticism some fans have made, it seems the producers will be making next season a little less silly, even if we do have to wait until 2020 to actually see it.